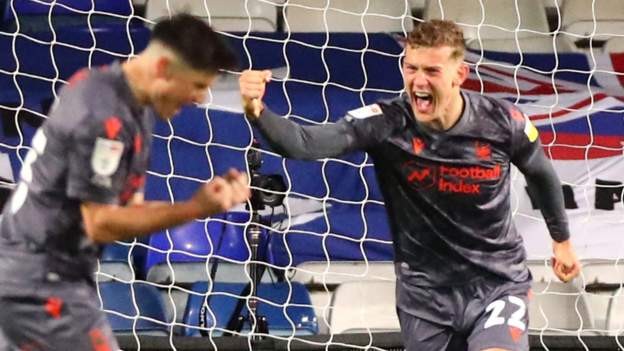 Chris Hughton extended his unbeaten run to four games as his Nottingham Forest side came back from a goal down with 10 men to draw at Luton Town.

Glen Rea put the Hatters ahead as he scrappily stabbed home from eight yards out after Forest failed to clear a corner.

Forest's task was made harder when Nicolas Ioannou was sent off for a dangerous foul on Martin Cranie shortly before half-time.

Having put Luton ahead, Rea then scored Forest's equaliser as Cyrus Christie's cross from the right went in off the back of the Luton man's head under pressure from Ryan Yates.

Forest stay two places above the relegation zone while Luton move up to ninth place, a point off the play-off positions.

The Hatters had a sixth-minute penalty appeal turned down after James Collins' shot from just inside the area hit the arm of defender Scott McKenna at close range.

Forest will be upset by the nature of Luton's goal; Sonny Bradley's far-post knockdown was not dealt with by the visiting defence, who also failed to clear at a second opportunity and Cranie was able to prod the ball through to goalscorer Rea.

Forest's task was made harder when Ioannou was sent off after he miscontrolled a pass and lunged in with his studs into Cranie's shin as he tried to win back the ball.

To Forest's credit they were the better side after the break, despite being a man down, and deservedly equalised with 27 minutes left.

Forest finally had a shot on target in the 87th minute when Yates forced a good save from Simon Sluga, before Luton went straight back up the other end and Jordan Clark's effort was stopped by Brice Samba.

"The disappointment was that I thought we started the game really well, we were quite bright and probably in the games I've managed so far it's probably the brightest we've started.

"What we need to be doing is we need to be scoring goals, particularly in periods of games when I think that we're having our better spells.

"But certainly after the sending off it was always going to be difficult, the chances were always going to be minimal, but what I thought we did really well was we restricted them to probably their best chance right towards the end of the game and managed to score ourselves."

Kazenga LuaLua (Luton Town) wins a free kick in the attacking half.

Attempt missed. Anthony Knockaert (Nottingham Forest) right footed shot from the left side of the box misses to the right following a set piece situation.

Attempt saved. Jordan Clark (Luton Town) right footed shot from the right side of the box is saved in the bottom right corner. Assisted by Sonny Bradley.

Anthony Knockaert (Nottingham Forest) wins a free kick in the defensive half.

Attempt missed. Glen Rea (Luton Town) right footed shot from the centre of the box is too high. Assisted by Matty Pearson with a headed pass following a corner.

Martin Cranie (Luton Town) wins a free kick in the defensive half.

Jack Colback (Nottingham Forest) wins a free kick in the defensive half.

Lyle Taylor (Nottingham Forest) wins a free kick in the defensive half.