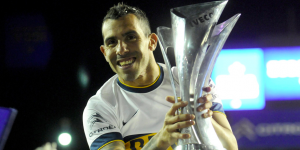 Carlos Tevez has confirmed that he will remain at Boca Juniors, following reports that Inter were interested in signing him this summer.

The Serie A outfit offered a way out for the Argentine striker after a fairly unfavourable season, however Tevez has shot down reports that he could leave his boyhood club for the second time in his career.

“I’m going to dedicate myself to professional golf,” he joked at a press conference.

“I have three years left of my contract [with Boca Juniors], there are no doubts.

“My idea is to retire after my time here. I wasn’t happy in Europe and decided to it was the right thing to come home [to Argentina].”

The 32-year-old has made it perfectly clear that he is not seeking a return to Italy, or even to reunite with former Juventus coach Antonio Conte at Chelsea.

“Whether you are Napoli, Chelsea, or anyone. I want to stay at Boca,” he said.

Tevez enjoyed a couple of fruitful seasons with Juventus before returning to Boca as he made 96 appearances, scoring 50 goals and providing 21 assists in all competitions for the Bianconeri.