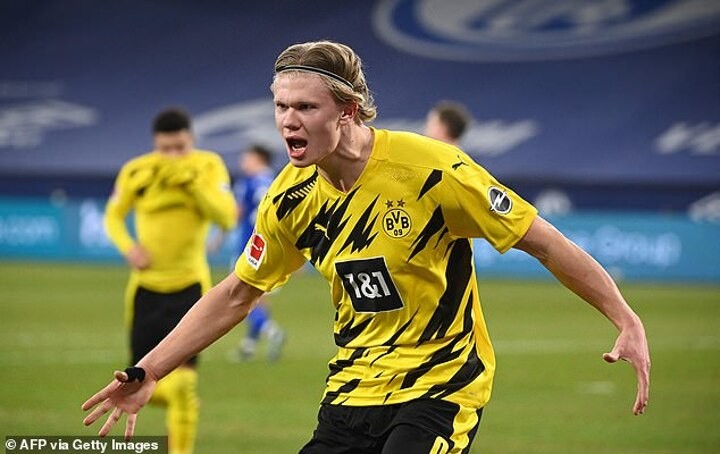 Chelsea and Manchester United are among the 10 sides that are in the mix to sign Borussia Dortmund star Erling Haaland, according to reports in Germany.

The Norwegian forward's agent Mino Raiola revealed on Wednesday that four of the 10 clubs that can afford to sign the 20-year-old - who has scored 27 goals across all competitions so far this term - come from the Premier League.

Manchester United and Real Madrid are two of the European powerhouses who have been regularly linked with a mega-money move for Haaland since missing out on him last January when he swapped Red Bull Salzburg for Dortmund.

But German outlet BILD claim that Thomas Tuchel and Jurgen Klopp's men are now among those clubs who would satisfy the Dortmund star's demands both on and off the field should he decided to leave Signal Iduna Park.

They are joined by the two Manchester clubs, but his next destination may well not be England with six other European giants also tracking Haaland closely.

Despite Barcelona's £1billion gross debt, they reportedly have joined LaLiga rivals Madrid, while Paris Saint-Germain could look to add him to their roster of attacking talent consisting of Kylian Mbappe and Neymar.

Moreover, the report adds that Dortmund would find it very difficult to keep him if they fail to qualify for the Champions League, with Edin Terzic's side currently sat in sixth, six points behind Eintracht Frankfurt in fourth.

Dortmund's sporting director Michael Zorc however appeared unconcerned by Raiola's comments, telling BILD: 'I am not interested in media reports'.

Norway international Haaland has a contract until 2024, which includes an exit clause of more than £87million (€100m) which comes into effect in 2022 at the earliest.

And should he leave the Signal Iduna Park, the same outlet believes he could fetch a new club record transfer fee, surpassing the £135m Barcelona paid for Ousmane Dembele in 2017.

Speaking earlier this week, Raiola insisted that the sought-after star is like the Lewis Hamilton of football.

'It is obvious that everybody is looking at Erling as one of those potential new future stars because it's so difficult to do what he does at his age at his level,' he told the BBC.

'He will be one of the future stars of the next decade because we see that stars such as Ibrahimovic, Ronaldo and Messi are coming to an age where everyone asks themselves: "How long can we still enjoy them?" So everyone is looking for the new generation.

'Only a maximum of 10 clubs can afford to buy [Haaland] and give the platform you would like after you've been in Dortmund… and four of those clubs are in [England].

'I don't think there's a sports director or trainer in the world who would say 'not interested'. It's like saying: 'Is there a Formula 1 team who would not be interested in having Lewis Hamilton?'

The Norwegian has been in potent form ever since bursting onto the scene as a teenager at Salzburg and has scored an astonishing 43 goals in 43 games since moving to Dortmund last year.