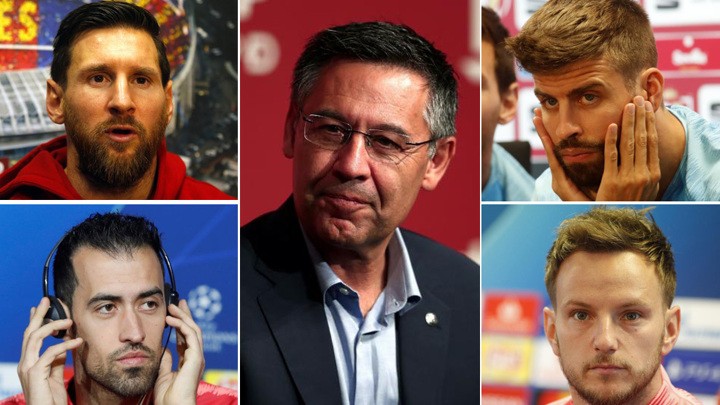 The Barcelona players have accepted a pay cut and have released a joint statement which was critical of the club's board as they did so.

This was just the latest example of the players speaking out against the way the Catalan club is currently being run.

Here, we look at the other examples.

The first criticisms this season came during the summer, before the campaign had even begun.

"It's not easy to be prepared because we've got a pre-season with lots of travelling and little training," said Gerard Pique.

"We know that our first opponents Athletic Club can arrive at the game more prepared," Valverde said.

New signing Frenkie de Jong was given the No.21 shirt, the same one that he wore at Ajax.

This mean this number was taken from Carles Alena, who wasn't happy with the way this was handled.

"De Jong was humble and I am okay with him having it because it is a sentimental thing," Alena said.

"But I'd have liked a message from the board, who gave him the number without advising me."

Arturo Vidal made a complaint against the club over an alleged unpaid bonus, although that complaint never went all the way to the relevant authorities.

The Abidal vs Messi conflict

After sporting director Eric Abidal said in an interview that he didn't think all the players were working hard around the time of Valverde's sacking, Lionel Messi hit back with a statement.

"I think that when talking about players, names should be given," he said.

"Because if not then we are tarred with comments that are said and are not true."

Ivan Rakitic's contract runs out in the summer of 2021 and the midfielder isn't happy with how the process has gone over a potential renewal.

"There are many things I haven't liked and I say this very clearly," the midfielder said when talking about his situation.

Rakitic was also critical of the size of the current squad, speaking out after the Champions League draw with Napoli.

"It's a small squad, but they already know that," he said.

So too was Sergio Busquets when he was asked about it.

"We have a small squad," Busquets said.

"Sadly that's the way the planning has been."

Some Barcelona players were allegedly the targets of I3 Ventures, a company allegedly hired by Barcelona to tarnish certain people's reputations.

While the players generally said in public that they believed the club's denial of this, Messi did admit it was strange.

"The truth is that I consider it strange," he said in an interview.

Then there is the latest drama, concerning a pay cut to help the club tackle the loss of income associated with the Coronavirus pandemic.

"It doesn't surprise us that the club wanted to put us back under the microscope and try to pressure us into doing something we were always going to do," Messi said when announcing that the players would take a pay cut and explaining the delay in this announcement.

"If the agreement has been delayed in the last few days, it's simply because we were finding a formula to help the club and also our employees in such difficult times."