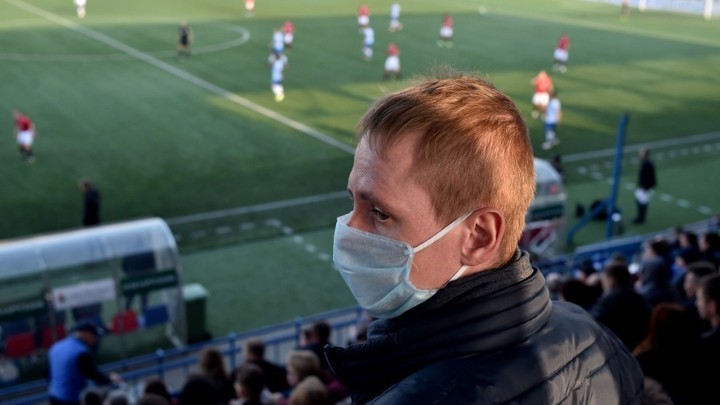 As the entire sporting world has come to a shut, the Belarusian Premier League remains open for business.

The Belarusian Premier League is the only one of UEFA's 54 league competitions that hasn't suspended its fixtures due to the coronavirus crisis.

"Therefore, it is normal that the most important sports competitions, such as ice hockey, handball and football, continue to run their course.

"In the end, the same people watching a league game in a stadium are using the subway."

So far, Belarus has less than 100 cases of coronavirus and no deaths, according to official data.

Although, as Yury Dounar confesses, "no one believes these figures."

The nation's president Alexander Lukashenko, has been giving his citizens some very particular advice to fight of the disease, including washing hands with the country's favourite drink: vodka.

"You shouldn't just wash your hands with vodka," the president said.

"But you should at least 40 or 50 millilitres every day, and go to the sauna two or three times a week."

The president has also suggested that tractors might also have some healing properties.

"There are people working with the tractors and nobody talks about the virus. The tractors will heal them, because the field heals everything."

Whilst some players are worried about the consequences of continuing to play during the pandemic, others have faith in the measures that are taking place.

"We know it's not easy to play now, but we have to be professional," Dinamo Brest's Elis Bakaj told MARCA.

"Even if we know we're in danger.

"Before every game we have to take several coronavirus tests and they take our temperature every two days."

Some players, however, are clearly more worried about the situation and don't understand why they are still playing.

"When every game is over, I feel like I'm infected. They should stop the league."

Despite the global situation, the fact that the Belarusian Premier League has kept going is allowing it to grow Belarusian football and promote the brand.

"The championship has exponentially increased its audience," Dounar said.

"Rights to games have been sold to Russian, Ukrainian, Israeli, Serbian and Croatian media.

"You have to bear in mind that Belarusian football does not usually generate money.

"So, for the first time in history, our national football can make money!"

The current situation has invoked the memory of the Chernobyl nuclear disaster of April 1986, which occurred just 17 kilometres away from the Belarusian border.

After that accident, 800,000 Belarusians suffered the effects of more than 70 per cent of the contamination that came over the border from the nuclear power plant in Ukraine.

"At that time the state also behaved as if nothing had happened," Dounar said.

"At the time they even maintained the national holiday of May 1.

"Now the government is already preparing a big national parade for May 9 in honour of the victory in World War II."

The world's exceptions: The Nicaraguan League and the Burundian Cup

With nearly the entire planet in lockdown, football has taken a back seat. That being said, there is still some football to be seen.

In addition to the Belarusian Premier League, the only other official tournaments still running are the Nicaraguan League and the Burundian Cup.

There's also still plenty of unofficial football. For example, friendly matches have been played between teams in Sweden, as well as in Finland and Estonia.