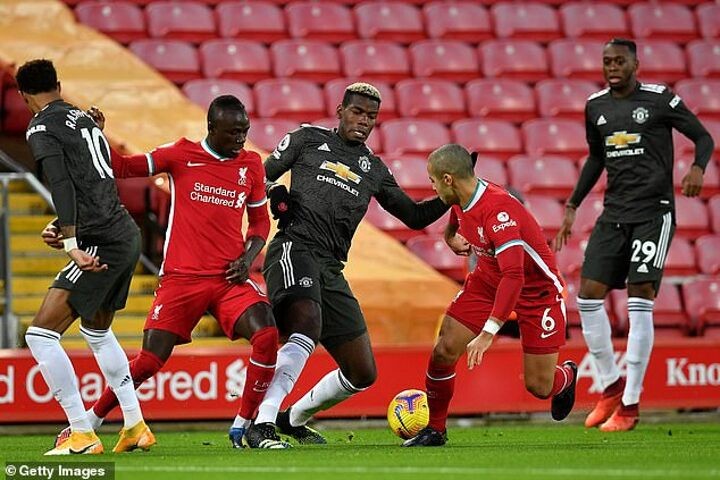 A week on from the drab 0-0 draw at Anfield, it appears little has changed between Liverpool and Manchester United 123 years on from their first FA Cup meeting which also ended goalless.

Since then though, England's biggest rivals have met 17 times in the competition (replays included) producing many memorable moments along the way.

Liverpool will be looking to win at Old Trafford in the FA Cup for the first time in 100 years on Sunday and Sportsmail takes a long at some of the biggest FA Cup encounters between the Premier League giants.

Although the league title was slipping into the grasp of Everton by this point of the season, Liverpool headed into this semi-final still with a chance of winning the treble given they had one foot in the European Cup final following a 4-0 win over Greek side Panathinaikos.

The original tie at Goodison Park proved a cracker, with Manchester United's Bryan Robson opening the scoring only for Ronnie Whelan to equalise with three minutes to play. Frank Stapleton fired the Red Devils back in front in extra-time but with just a minute left, Paul Walsh forced a replay at Manchester City's former ground Maine Road.

This time it was Liverpool who opened the scoring with a first half own goal from Paul McGrath but Ron Atkinson's side hit back after the break with strikes from Robson and Mark Hughes to progress to Wembley.

United would eventually defeat Everton in the final, who at least had the consolation of claiming the league title, but Liverpool would end the season empty handed after losing the European Cup final to Juventus.

England's biggest rivals going head to head in an FA Cup final was always going to be a highly anticipated affair, but sadly this game has been remembered more for the white suits Liverpool turned up in pre-match rather than the on-pitch action.

Still though United had the business of banishing memories of the previous year's final when they were stunned by another Merseyside outfit in Everton, while also looking to complete the League and Cup double after seeing off Newcastle United to lift the Premier League title on the final day of the season the previous weekend.

Curiously the final came 19 years after United had beaten Liverpool in the 1977 final having suffered another shock defeat at the hands of Southampton in a Wembley showdown a year previously.

Liverpool though had the psychological edge having beaten United 2-0 in their previous meeting at Anfield, while also grabbing a 2-2 draw at Old Trafford at the start of the campaign.

The game was goalless and largely chanceless with five minutes left until Reds keeper David James could only punch a clearance as far as Eric Cantona on the edge of the box, who struck through a crowd of players to complete the double for Sir Alex Ferguson's side.

A casual glance at Manchester United's treble-winning season makes it look like it was a little bit too easy for Ferguson's men. But heading into this late January fourth round tie, there were serious doubts over whether they would win anything at all.

They had only started to find winning form again following a rotten December which saw them win just once in eight games across all competitions, leaving them third in the Premier League behind Chelsea and Aston Villa.

But an astonishing late comeback started with Dwight Yorke looking like he had at least forced a late replay, before Ole Gunnar Solskjaer stole the game in stoppage time having come off the bench - a dress rehearsal for the Nou Camp and the Champions League final later in the year...

Aside from their abysmal FA Cup record against Manchester United, Liverpool had a big score to settle from this game having less than a month earlier lost 1-0 at Old Trafford due to a last minute goal from Rio Ferdinand.

Reds fans in particular already had a pantomime villain to target in Gary Neville, after the Red Devils defender celebrated the goal by kissing the United badge in front of the distraught Liverpool fans in the Premier League encounter.

However, it was only Liverpool fans cheering (and jeering Neville) in this tie with Peter Crouch scoring the game's only goal with a 19th minute header to secure Liverpool's first FA Cup win over their rivals for 85 years.

United's day was made worse when Alan Smith broke his leg blocking a free-kick with a minute to play, but for Liverpool the victory was made sweeter by the notion of going on to win the competition against West Ham.

The encounter in Cardiff later on in the year is regarded as one of the greatest modern day finals after a 3-3 draw was secured by a last-gasp wonder strike by Steven Gerrard, before the Reds came through on penalty kicks.

Emotions were running high in the build up to this game with Kenny Dalglish returning to manage Liverpool 20 years after quitting the club following the sacking of Roy Hodgson.

Worse was to come for Liverpool and Dalglish when Steven Gerrard was sent off half-an-hour later as they once again tumbled out of the Cup to their bitter rivals.

Liverpool forward Ryan Babel was far from happy with Webb's officiating and after the game posted a mock-up picture of the referee wearing a United kit. Despite deleting the Tweet and apologising he was fined £10,000 by the FA - becoming the first player to be punished for his actions on Twitter.

United fans could have been forgiven for thinking the FA Cup was never destined for them in 2012 when their reward for a hard fought 3-2 win at Manchester City (marked by Paul Scholes' first match back after coming out of retirement) was a fourth round trip to Anfield.

Liverpool though were physically on the backfoot having only faced City three days earlier and holding off Roberto Mancini's side with a 3-2 aggregate win to book a place in the League Cup final.

Scholes started for United on Merseyside but it was Liverpool who drew first blood when Agger opened the scoring after 21 minutes, only for Park Ji-sung to equalise just before the break.

The game remained that way until two minutes from time when it was the Reds who struck gold with a late winner from Dirk Kuyt as they and Dalglish gained a measure of revenge for the previous year's defeat at Old Trafford.