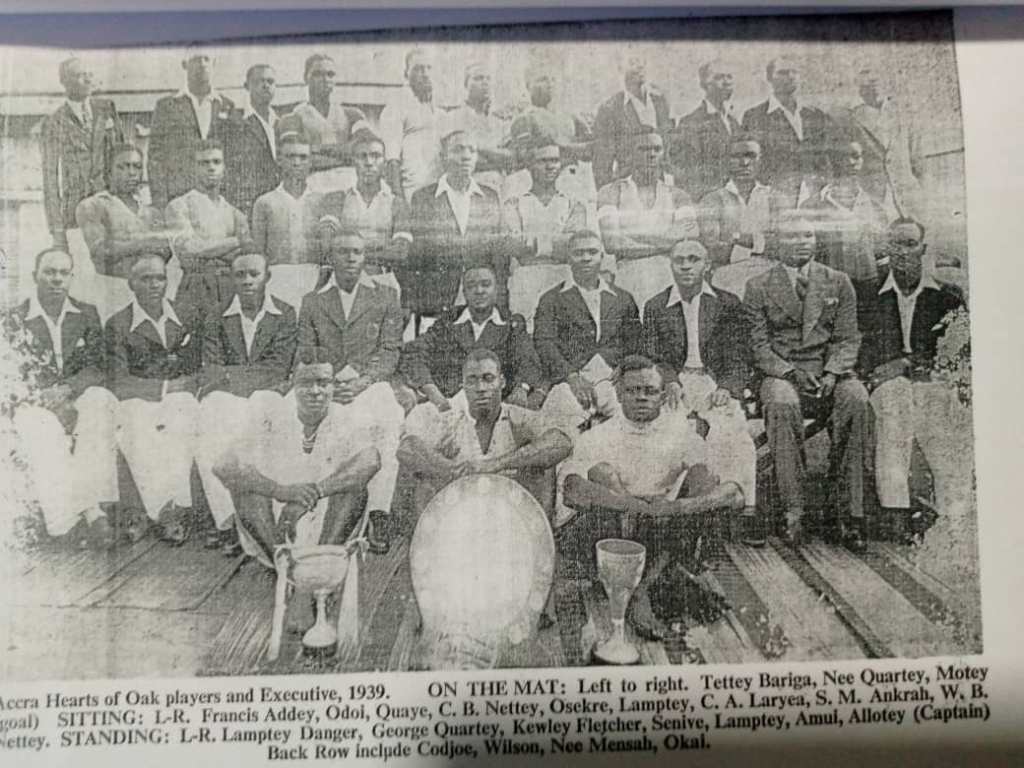 Football was introduced into Ghana at the turn of the 20th century. In 1910, the first football club was formed in Accra.

The name chosen was The Invincibles and the club comprised mainly young men from the James Town area. 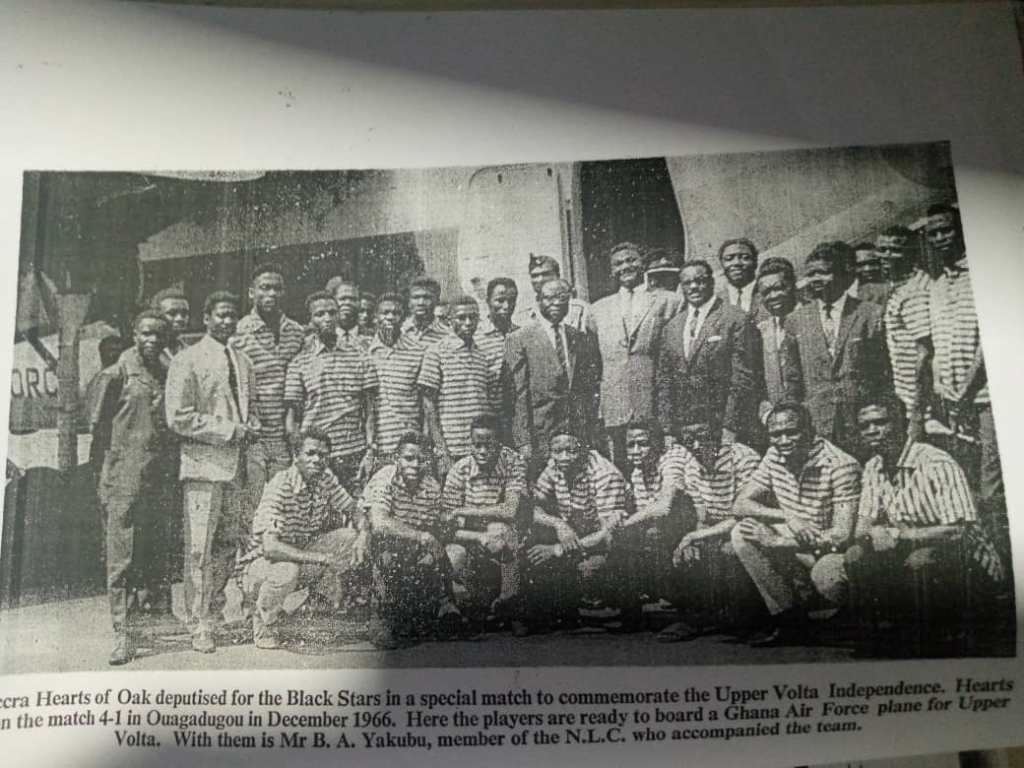 The need for a rival club was soon evident and the response to this was the birth of what now stands as the oldest surviving club and still one of the most outstanding clubs in the country’s history, Accra Hearts of Oak.

Hearts of Oak actually began in the middle of 1910 when young men from Ussher Town started practising with a tennis ball.

Towards the end of the year, a young man from Saltpond, where the game had been played earlier, came to Accra and took up the training of the players. His name was Akom Duncan. By 1911, Hearts of Oak, with Mr Akom Duncan as their captain, were ready to take on the Invincibles.

The most memorable date for Hearts of Oak, in this period, was November 11, 1911, which has become the anniversary of the formation of the club. This was the date on which Hearts of Oak out-doored with jerseys and formally bound themselves into the giant club it was to be. 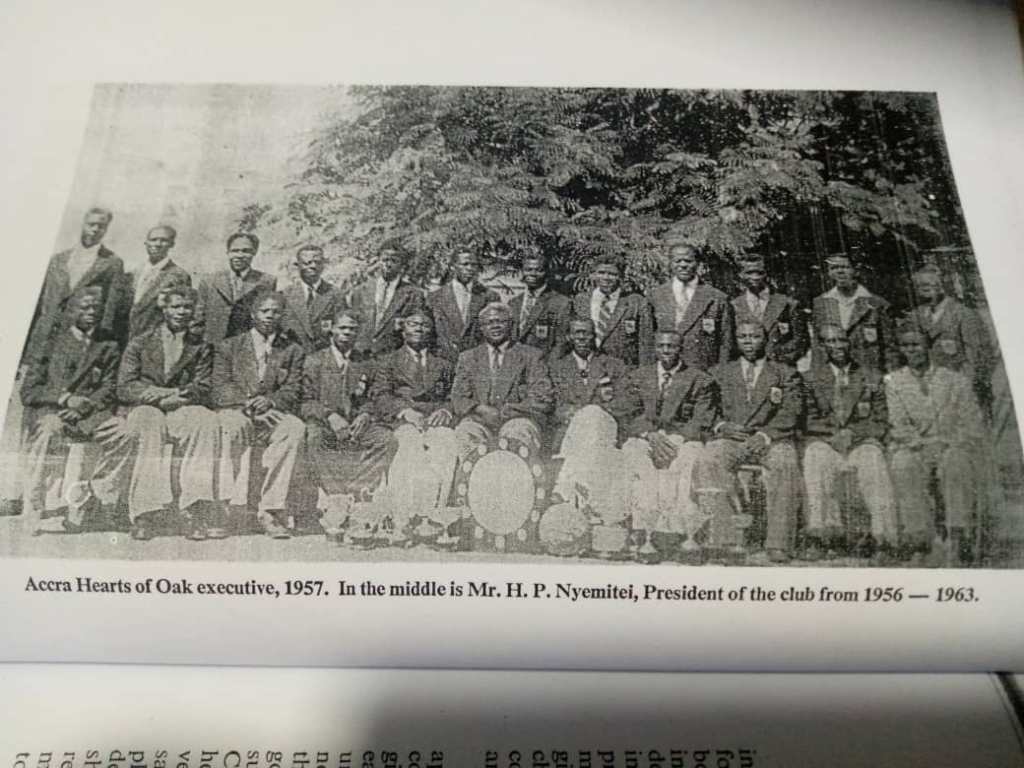 The outdooring ceremony was conducted with tradition. All the players met at the home of a Captain Mark Nettey at Ussher Town. From there, they moved to the Korle Lagoon at the Old Fadama Railway Crossing, bathed in the Lagoon for some minutes and then put on the jerseys.

All dressed up in their jerseys, they marched to an open space nearby (where now the Royal Cinema stands) and put up two posts. Hearts not only had their jerseys but also a park on which to train and play.

No officers were elected for the club. All the members were players and they all accepted the leadership of Akom Duncan.

Matches were played regularly between Hearts of Oak and the Invincibles, with each side winning in turns. The interest generated by these matches inspired the formation of several other clubs in the succeeding months.

Football was expanding in Accra and the competition had become all the keener. Hearts of Oak acquired a new park, at the spot where the headquarters of the Electricity Corporation of Ghana stands.

The club found a Patron in the late Hanson Sackey, an auctioneer who was the father figure of the club in the formative years.

In 1914, Capt. Nettey was appointed the first secretary. These appointments gave the club a functional structure which other clubs lacked.

In 1917, Hearts decided to change its colours. Mr T.F. Bruce-Tagoe, popularly known as Teacher Bruce-Tagoe, designed the new rainbow colours (red, yellow and blue) and, with the approval of the executive, placed an order for the jerseys from Manchester.

When the jersey arrived, a match was arranged with Invincibles, the first club formed in Accra. It was played at the London Park, which is the present site of the James Town Police Station. Hearts won, 1-0.

But what attracted the crowd was not so much the manner of play as the bright jerseys of Hearts. This drew both spectators and some players of Invincibles to the Hearts camp after the match and thereafter, several players from other clubs began streaming into the club in the hope of wearing the bright jerseys.

Hearts proceeded to elect their first chairman, the late S.Q. Nelson, an engineer, who had played football in Nigeria.

Shortly after the outdooring of the new jerseys, a match was arranged with Steadfast who were later to become the closest rival of Hearts in the city.

The excitement created by this match was great and on the eve of the match, word spread around that Standfast had obtained some miracle which would make any Hearts player attempting to score a goal go blind. Such stories were not to be taken lightly in those days and some Hearts players were evidently reluctant to shoot at goal.

The exception was a young boy who had returned from Nigeria and was attending the Government Boys School in Accra. This young school boy found his way into the team as a result of the reluctance of some senior players to risk going blind. As soon as the team entered the field, he walked to the goalkeeper and told him: “Now let’s see if I will see you in the goal or not.”

That schoolboy was Okoe Tetteh. He proceeded to score two goals – the only goals of the match – and Hearts won without having any blind men to care for.

Mr J.W. Blakson – Mills, a Ga official who had been resident in Nigeria for some years, had been connected with football in Calaber for sometime. When he returned to Accra in 1915, he followed up his interest and tried to introduce league football in the city. These efforts were not wholly successful until 1920 when matters began to take a turn for the better.

But even in those days, anyone who tried to assume the leadership in the organisation of football was bound to face some challenge somewhere. Thus only a year after the league competition initiated by Blankson Mills, a struggle for leadership ensued. Mr Blankson – Mills abdicated and Mr Hesse Odamtten took over the operation of the league.

Meanwhile, the Governor of the Gold Coast, Sir Gorden Guggisberg, perhaps the most outstanding of the colonial Governors who ruled this country, was showing active interest in the promotion of football in the country. In 1922, he donated a shield – the Guggisberg Shield – for league football in Accra.

The first Guggisberg Shield competition was organised in 1922. Hearts were the most outstanding team in the competition and finished well ahead of the table, thus becoming the first City Champions.

Hearts were to win the Shield six times in 12 competitions and are today its proud custodians, having won in the last competition in 1954.

Several names later to be made famous in other fields were added to the membership of Hearts of Oak in the early Guggisberg Shield period. One of them was to be Ga Manche, Nii Tackie Tawia II. He played for the club and later became chairman until his enstoolment as Ga Manche in 1944.

In the year 2000, Hearts of Oak had a perfect campaign by winning the Ghana FA Cup, the Ghana Premier League and the CAF Champions League

In February 2001, Hearts topped off a perfect campaign with a 2-0 victory against Zamalek club of Egypt at the Kumasi Sports stadium in Ghana to win the Africa Super Cup.

Three years later, in 2004, Hearts won the first edition of the CAF Confederation Cup, the merger of the defunct African Cup Winners Cup and the CAF Cup. Hearts beat arch-rivals Asante Kotoko 8-7 on penalties after the two legs ended 2-2. The win made Hearts of Oak the first club to have won both annual club competitions on the continent.