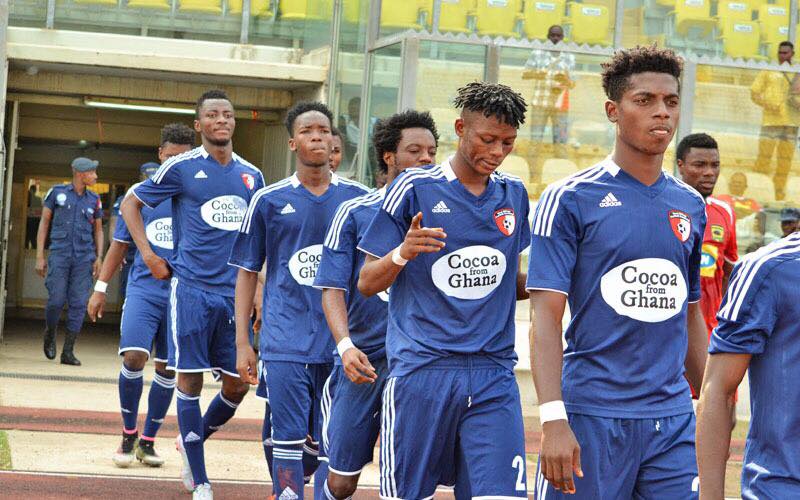 Events in the penultimate games of the first round of the Ghana premier league have blown the title race wide open once again.

Table toppers West Africa Football Academy were stopped in their tracks by Hearts of Oak to bring to a halt an impressive 7 game winning streak. Hearts struck early through a Thomas Abbey header before an Abalora howler gifted them the second midway into the second half. Ibrahim Musah pulled a goal back for WAFA late on but it was too little too late as they succumbed to their first defeat in 8 games.

Champions Wa All Stars suffered their second defeat on home turf at the hands of Bechem United. Ahmed Toure’s solitary strike in the second half was enough to put the champions to the sword.

Great Olympics piled more misery on clueless Asante Kotoko outclassing them in a one sided 2-0 thriller and condemning them to their eighth straight game without a win. Paul Fiatsi and Francis Atsu were the scorers on the day.

Medeama SC overcame Elmina Sharks in a replay of their game which was rained off on Sunday. A Justice Blay brace and John Arthur goal in either half saw off the Sharks challenge. Sharks pulled one back through Benjamin Tweneboah.

Ebusua Dwarfs showed no mercy as they whitewashed out of sorts Ashanti Gold FC by 4 goals to 1. Prince Owusu continues to shine in adversity bagging Ashgold’s consolation. Solomon Gyesi, Joseph Esso and Raphael Mensah did the damage for the home side.

Inter Allies thumped lowly Bolga All Stars by three goals to nothing. Goals from Prince Baffoe, Isaac Konney and Ishmael Ntefuni ensured that Inter Allies eased past the new entrants.

A DEADENER TO WAFA’S TITLE CHARGE?

Known for treating fans with delectable and eye catching displays only to make up the numbers in the Ghana premier league, West Africa Football Academy have tweaked their posture this term. The Sogakope based club have found an antidote to their then ailing away performances which almost nullified their impressive home form season in season out.

Their sudden adaptation to all manner of footballing conditions in the premier league has added more urgency to their already finesse centred philosophy. This evident change of posture has seen them build a much stronger mental fortitude, a prerequisite for adverse moments in the local league. It is therefore not surprising to see WAFA churn out gallant displays in some of the difficult venues in association football. Notable among them is the famous 4 goal thrashing of champions Wa All Stars at the Malik Jabir park.

WAFA’s newly found perfect combination of finesse and brawn saw them going on an impeccable seven game winning streak, the longest thus far in the league. However WAFA’s momentum was deadened in the just ended match week by Hearts of Oak. Not only were they beaten but were beaten to their own carousel style of play at some points in the game. This may not be their first defeat of the season but definitely a test of their character having gone a long haul without even a draw.

With Aduana Stars level on points with WAFA who now lead with superior goal advantage, will they have the nerve to hold their own and press on with the title charge or the deadener to their fairy tale story has just struck?

Follow the Ghana premier league for answers to all these thought provoking questions in the coming weeks. *THIS PIECE IS DEDICATED TO THE MEMORY OF THE 127 FOOTBALL FANS WHO LOST THEIR LIVES ON THIS DAY 16 YEARS AGO AT THE ACCRA SPORTS STADIUM.

NEVER AGAIN !!! MAY THEIR SOULS REST IN ETERNAL PEACE!