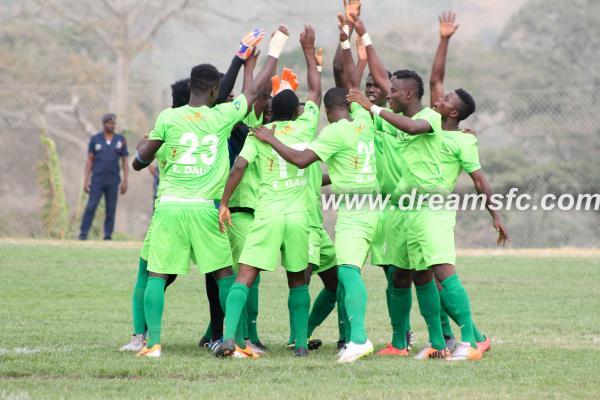 Hostilities resumed in midweek as the Ghana premier league zoomed further into the run in. Whereas no team appears to steer clear at the top, the dogfight at the foot of the log is now a game of unpredictability.

Champions Ashanti Gold held league leaders Hearts of Oak in an end to end 1 all drawn game. All Stars lost 2-0 away to Inter Allies to leave them a further 1 point adrift in the chasing pack. Hasaacas were at the receiving end of a thumping losing by 4 goals to Liberty Professionals at the Carl Reindorf. Dreams FC hit psychologically fickled Berekum Chelsea for 4 in their game at the Dawu park.

New Edubiase staged a bid to lift themselves from the bottom by beating Asante Kotoko 2-1 in the Ashanti derby. Bechem United were 2 nil victors in their Brong Ahafo derby game against Techiman City FC . Ebusua Dwarfs saw off poor travellers West Africa Football Academy through a solitary penalty goal at the Robert Mensah Sports stadium.

New Edubiase and Ebusua Dwarfs were the biggest beneficiaries as the spot kick calls ensured they went home with maximum points. It was quite refreshing that only one of them was squandered. 5 out of 6 in a shootout in any major competition means a team wins or at worst stays in contention. Having suffered the cruel fate of being at the wrong end of most shootouts at any level as a country could this be a turning point in our fortunes?

Impressively four out of the scorers are Ghanaians and potential internationals in only a matter of time.

With this feat coming on the back of yet another penalty miss in Africa club competition a day earlier, one can only hope this is the new dawn of era we have been craving for. Hopefully this would not be a flash in a pan but a true mastering of the penalty technique that will transcend to all levels of our football.