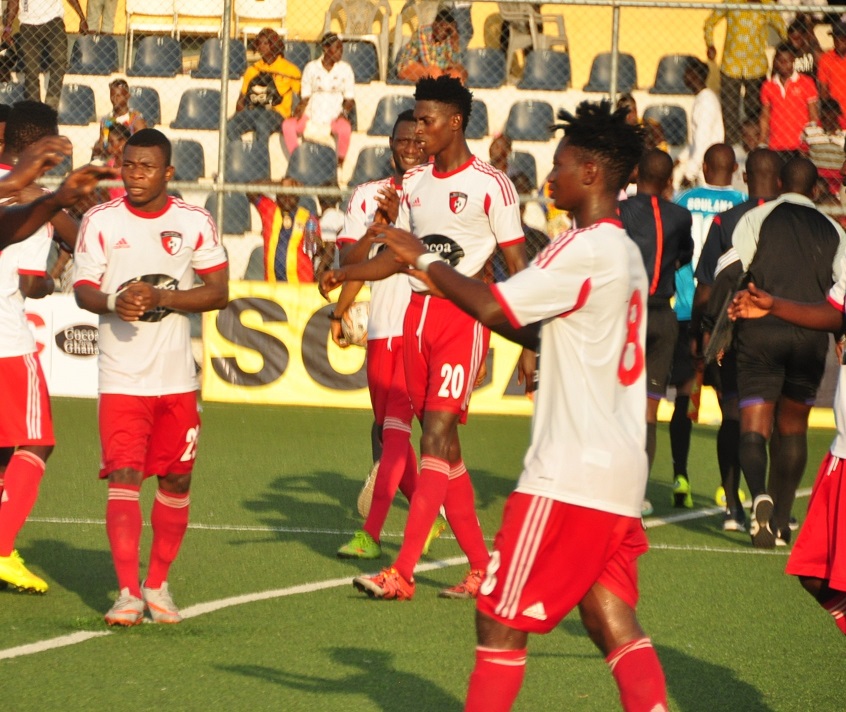 League action proceeded throughout the Easter festivities as it inches closer to its halfway mark.

Medeama SC and Bechem United got the weekend’s action underway at the Tarkwa T/A park. Two first half goals from Paul Aidoo and Amos Korankye gave the home side all three points.

In Wa, champions All Stars rubbed salt into the wounds of Asante Kotoko by inflicting a 1-0 defeat on them. Kwaku Asuandzie’s first half strike further deepen Kotoko’s woes condemning them to 5 straight games without a win.

Aduana Stars were at their scintillating best at home with a 3-0 emphatic win over Tema Youth football club. Goals from Noah Martey, Mohammed Tanko and Nat Asamoah ensured that Aduana kept a stern chase on leaders WAFA.

Captain Nicholas Gyan was on hand yet again as his 15 minute strike was just enough to give Ebusua Dwarfs maximum points against Berekum Chelsea at the Cape Coast stadium.

Table toppers West Africa Football Academy dispatched off new entrants Bolga All Stars at the Red Bull Arena via Caleb Amankwah and Gideon Waja goals in either half of the game.

Liberty Professionals and Great Olympics played out a goalless draw in the derby played at the Dansoman Carl Reindorf park.

Hearts of Oak missed a glorious opportunity to cement their position in third as they were held at home by Elmina Sharks. Two goals in quick succession by each side in the second half left it all squared at the end of proceedings.

There seem not to be an end to the free fall of Ashanti Gold FC as they registered yet another defeat away to Inter Allies. A Prince Baffoe goal in the first half handed C. K Akunnor his first defeat as manager of the embattled Ashanti Gold FC.

With Aduana Stars faltering on the road West Africa Football Academy have taken full advantage and seized the initiative at the top of the pile. The perennial poor travellers have suddenly turned on the style and are romping to earn valuable points on their travels. Just the stride a team which is virtually unplayable on their home turf needed to get a go at the ultimate.

Not only have they been buoyed by the loss of their coach and mentor Sam Arday but their recent run of good results would have whipped some belief in them to go for the jugular. With a consistent setup and a serene football environment devoid of infighting and fan disturbances their only nemesis to glory remains themselves and their psyche.

Their very strong unit is bolstered by a technically gifted goalkeeper in Razak Abalora who has the ability to man a solid defensive unit as well as start very meaningful attacks. The team revolves around an intricate engine room, Gideon Waja who has shown a great deal over seasons and is in no mood to capitulate.

Komla Agbeniadan has been banging in the goals for the Sogakope based club but the good thing is the goals have fairly been distributed across the field this term. Majeed Ashimeru, Richmond Lamptey, Caleb Amankwah, Daniel Agloe, Gideon Waja, Prince Obeng Ampem have had a fair share of the goals. With such ability spread all over the field they could only be hampered by complacency.