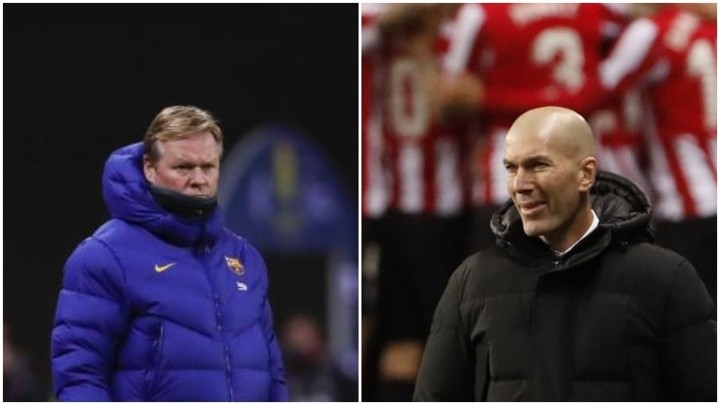 Neither Barcelona nor Real Madrid have managed to win their first trophy this season as they missed out on the Supercopa de Espana, a tournament that prior seemed tailor-made for the two Spanish giants.

The two powerhouses have also struggled both in the LaLiga Santander, as well as in the Champions League, so far this season and it's uncertain as to whether they will manage to clinch a trophy in 2020/21.

Athletic Club won the Supercopa de Espana and Atletico Madrid top the LaLiga Santander table, despite Real Madrid and Barcelona being favourites to win both competitions.

The Basques scored twice in the first half hour against Real Madrid, who improved in the second half bud didn't manage to turn the game around and were eliminated from the tournament.

In the other semi-final, Real Sociedad were the better team, but Marc-Andre ter Stegen put in a world class performance to lead Barcelona to the win and all the way to the final.

In Seville, Athletic came back from behind twice and grabbed a well-earned win in the extra-time with Inaki Williams' spectacular goal.

Neither Real Madrid nor Barcelona will fall into depression after missing out on the Supercopa de Espana, but their displays are worrying as none of the two dominated against seemingly weaker teams in the tournament.

This was the first chance to win a trophy this year as they have struggled both in LaLiga Santander and in Europe.

Should Atletico Madrid win both their two games in hand, they will be 10 and 13 points ahead of Real Madrid and Barcelona, respectively.

Meanwhile, the Blaugrana will face a strong Paris Saint-Germain side in the Champions League's Round of 16, where Los Blancos will take on an impressive Atalanta.

On Thursday, Barcelona will play their first Copa del Rey game this season away at Cornella, who knocked out Atletico in the last round, while Real Madrid are set to face Alcoyano on Wednesday in the Round of 32.

Neither of the two sides will have an easy task ahead of them in the cup, where both Ronald Koeman and Zinedine Zidane are expected to give the nod to several fringe players.