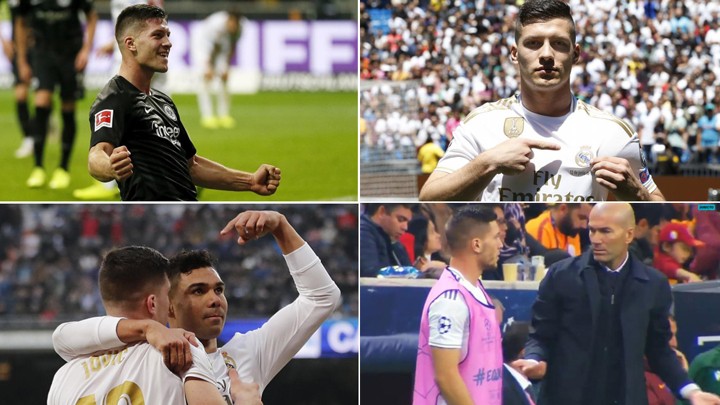 It may seem strange that in a season where Real Madrid are struggling to score they are letting one of their more senior strikers leave the club on loan, but there are very clear reasons as to why Luka Jovic has been allowed to return to Eintracht Frankfurt.

Zinedine Zidane was a huge fan of Jovic 18 months ago and his energy encouraged Los Blancos to pursue a deal for the Serbian international, yet he has barely found any level of success since then.

In 2018/19, Jovic scored 27 goals for Eintracht as he shone on both the domestic and European stages with the Bundesliga club, and it was this form which persuaded Florentino Perez to part with 60 million euros for the striker.

Having been refused a loan move in the summer, Jovic is now headed back to a familiar environment, and here's why.

A conversation with Zidane

Weeks ago, Jovic had a discussion with Zidane in which the 23-year-old wanted to know what the plans were for him in the 2020/21 season, as well as knowing where he could improve.

Jovic didn't want to spend another six months on the bench, with his minutes totalling 208 in the first half of the campaign.

Zidane didn't close the door to a January loan departure, especially as the player's return of two goals in 32 games in hardly up to the standards of Real Madrid.

He needs to rediscover his form

Football, like most sports, is all about momentum and rhythm to supplement natural talent. Jovic has lost his confidence in Madrid and looks nothing like that brash hitman who bullied Europa League teams for fun in Frankfurt.

Scoring 28 goals in a single season doesn't happen by accident, and getting to play every single week will help the player, especially as Eintracht are in need of goals.

Adi Hutter knows how best to motivate Jovic and he will be keen to get him back firing on all cylinders in 2021.

An environment which will take no getting used to

Moving to Madrid has been part of the problem for Jovic, as he has never fully adapted to life in either the Spanish capital or LaLiga Santander.

One of the great benefits of a return to Eintracht is that he's going to a place that he knows so well and was incredibly comfortable.

In theory there won't need to be an adaptation period, and this is why he prioritised a return to Eintracht over moves to Serie A, the Premier League or Ligue 1.

He needs to learn a lot of things

Jovic has made mistakes in Madrid, a lot of them in his personal life, but given his tender age he can be given the benefit of the doubt.

Zidane wants Jovic to go to Germany and grow as both a footballer and a person. He wants him to learn a lot of things.

"He is a striker who scores goals, that is what we want from Luka, but as a forward he was young when he arrived, 21, he has to learn many things," Zidane explained.

Real Madrid are confident he will return

Los Blancos had next to no appetite to allow Jovic to leave permanently; they have confidence in his footballing talent and believe there is a star in there.

They wouldn't accept a loan deal with an option to buy as they have no intention of selling him, so Real Madrid will welcome Jovic back at the end of the 2020/21 season.