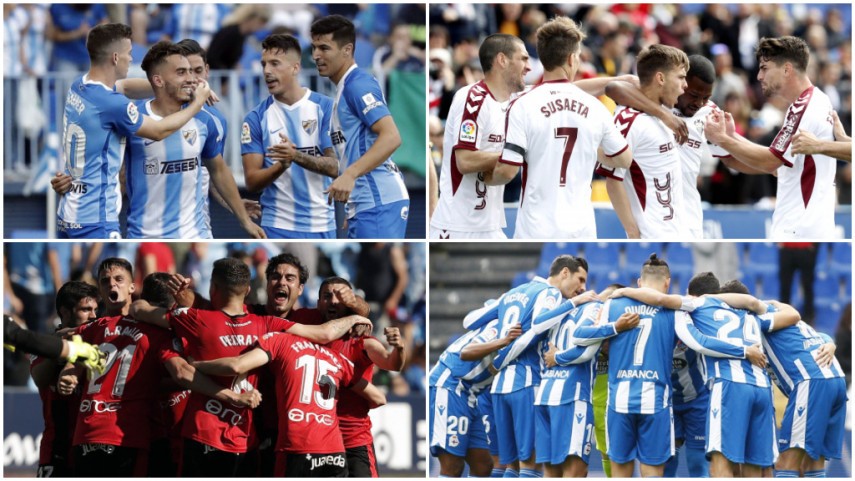 It really has been a season of ups and downs for the Andalusian outfit, who hit form at exactly the right time. Five wins in a row during the run-in saw the Blanquiazules land third spot, a finish which looked nigh on impossible when Victor Sanchez del Amo replaced Ramon Lopez Muñiz in the hotseat with just eight rounds of games remaining. Following the Matchday 37 action, the Costa del Sol side dropped out of the play-off places, with this setback representing the first and only time they hadn't been in the automatic promotion or play-off spots all year. However, the team responded excellently and approach this decisive phase in fine fettle as they seek to bounce back to the top flight at the first time of asking.

In three of the eight seasons since the introduction of the play-offs for promotion to LaLiga Santander and under their current format, the side that finished third ultimately ended up prevailing in the play-offs.

The Castile-La Mancha side proved to be one of the season's surprise packages, with hardly anyone expecting La Alba to be in the promotion shake-up. However, Albacete embark on their play-off campaign with high hopes of gracing the elite for the first time since the 2004/05 season. The team's consistency has been central to their bid, having been in the promotion places since the 11th round of games and even occupying top spot several times throughout the season.

Luis Miguel Ramis's charges flirted with automatic promotion and were in the top two as late as Matchday 35, but just a pair of wins from their last seven outings means that they had to settle for a play-off place. Albacete will have to put their poor run of form firmly behind them and rediscover some of their consistency if they're to get the better of Mallorca.

The islanders have been, without doubt, the one team that has taken everyone by surprise this term. In their maiden campaign back in LaLiga 1l2l3, Mallorca's totally revamped squad have enjoyed a year that'll live long in the memory of the club's supporters.

The side from the Balearic Islands made a really promising start to the campaign and, although their promotion challenge looked to have lost some momentum at the halfway stage, a strong end to the season propelled them into the play-offs. The key to their promotion quest has been their impressive home form. Of the four sides in the promotion picture, Mallorca are the ones to have collected the most points in their own backyard and Vicente Moreno's men will be looking for home comforts to once again give them a boost in the play-offs.

Just when it appeared as if the Galicians' chances of a play-off place were over, an excellent run of results and some timely slip-ups from their fellow promotion pretenders saw the A Coruña-based side sneak into the end-of-season lottery. Having taken their campaign beyond the regular season, Depor will be doing their utmost to follow in the footsteps of Cordoba CF and CA Osasuna, who gained promotion to the promised land after ending the season in sixth, in 2012 and 2014 respectively.

The Riazor outfit approach the final stage of the campaign in buoyant mood after clinching a play-off berth that had looked to be beyond them. That morale-boosting achievement along with the squad's vast top-flight experience could ultimately hand them the edge they need to successfully negotiate their way through the play-offs.