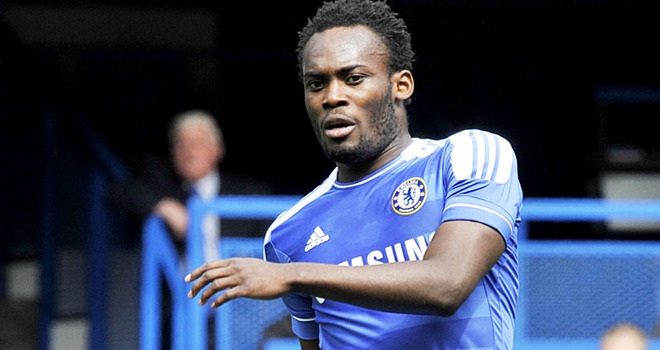 Saving the Stamford Bridge home record in the most spectacular fashion, Essien's thundercracker during his pomp was the best goal I've ever witnessed for Chelsea.

I am torn on determining what is the greatest ever goal that I have seen at Stamford Bridge.

I am lucky that during my time of being a season ticket holder I have witnessed some incredible pieces of skill (Zolaâ€™s back heeled wonder goal against Norwich), technique (Juan Mataâ€™s first time volley against Manchester United) and unrivalled joy (John Terryâ€™sÂ winner against Barcelona).

However, being a traditionalist you can put your tiki-taka 2,000 pass moves to one side â€“ my favourite goal at Chelsea will have to be one of several long distance screamers.

There have been some ludicrous goals scored at Chelsea with efforts from Oscar (versus Juventus) and Michael Essien (versus Barcelona) topping the bill.

However, for a goal to truly mean something the context is absolutely crucial. In this respect I have chosen Michael Essienâ€™s thunderbolt against Arsenal.

The years that Michael Essien remained injury free at Chelsea were some of the best the club has ever known. That is certainly not a coincidence.

A fully fitMichael EssienÂ was without question the most devastating midfielder the Premier League had ever seen.

He could do absolutely everything: a box-to-box midfield enforcer with an unparalleled engine and desire to win football matches.

In his pomp he could win a midfield battle almost single handily.

In a season where he played as a right back, centre back, holding midfielder, attacking midfielder and auxiliary wide man he was quite unbelievable.

Essien was the type of player that Chelsea miss badly in the current squad. Essentially he was a Swiss army knife, doing everything and playing anywhere for the cause. His career has been curtailed through injury, but he remains one of my all-time favourite Chelsea players.

Playing against Arsenal when Arsenal were still Arsenal and not the Emirates Academy Sell-On FC was a huge game.

The fortress that Mourinho had created at Stamford Bridge had come under serious assault for the first time in a long time and a loss looked like it might be on the cards. Now any loss toÂ Arsenal,

Tottenham or any other London club is never particularly nice, but a loss to end such a historic streak would have been unbearable. Chelsea had consummately outplayed Arsenal for the first time in what seemed like decades, yet somehow found themselves one goal behind.

In truth the positioning of Essien came down to a piece of Mourinho magic. I do not think there is a manager currently operating who can instantly spot the flow of the game and alter it so effectively.

As Arsenal began to sit deeper and deeper it was a typical Mourinho countermove which saw Essien pushed to right back and subsequently in position to unleash one of the Premier Leagueâ€™s great strikes.

With the game approaching the 90 minute markÂ ArsenalÂ effectively had a back five on the pitch. The game was ticking along far too quickly and it had an impending sense of needing something a bit special to bring the game level.

Luckily Chelseaâ€™s number five had the ability needed to do the unexpected.

Frank Lampard picks the ball up in a tiny amount of space and shifts the ball into the path of the onrushing Michael Essien.

With options to his right and a potential mismatch in the middle of the area passes were certainly on as he was about to collect the ball.

What I love about Essien is his sense of the big occasion. In his head he was only ever going to strike that ball as hard as he could.

The strike itself was just otherworldly. Hitting a ball on target first time as it comes across your body is a skill in itself, but to strike the ball that sweetly from that far out was just beautiful to watch.

The ball danced in the air swerving nefariously from starting a foot outside the far post. It continued to bend at a ridiculous pace before smashing in off the post. It was unstoppable. From over 30 yards out the equalising goal to preserveÂ Mourinhoâ€™sÂ unbeaten run.

I can remember the crowd almost collectively drawing its breath as the ball came towards Essien. The resounding thud of the ball as it exploded off the Bisonâ€™s instep is a noise that you can clearly hear on any of the clips.

In the ground it sounded like an explosion. One of the best strikes of a football you are ever likely to see, in one of the most high pressure games going â€“ a hallmark of enduring class.