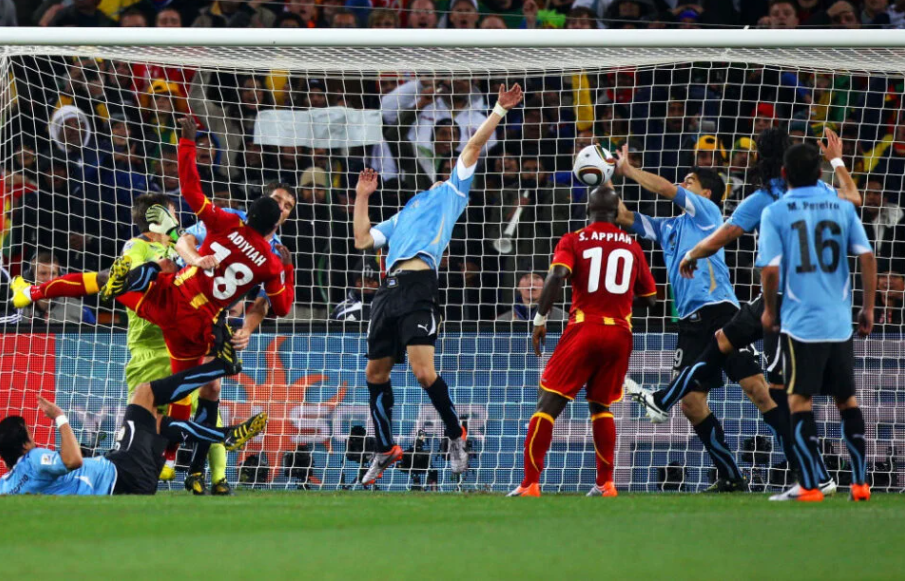 There was one minute left in extra time in a vibrant game. The suddenly famous vuvuzelas added a curious footballing harmony to the tension engulfing Soccer City Stadium in Johannesburg.

Ghana went on the attack in search of the miracle. He had it once and lost with the agonizing clearance of Luis Suárez, but the Africans tried again and the Pistolero was once again the celestial savior , but he did it as a goalkeeper. Penal! The crossbar denied Asamoah Gyan the victory and the suspense extended to the spikes from twelve steps . Then, Sebastián Abreu did his thing and stung the ball in the last shot. A madness that took the people of the River Plate to the semifinals of the World Cup in South Africa.

The last 60 seconds of the matchup for the quarterfinals had all the attractions to make them last forever. resistant to forgetting The 1-1 seemed sealed. Ghana, the only remaining representative to Africa in the first World Cup hosted by the Black Continent , advanced decisively towards Fernando Muslera's goal. Serbian Milovan Rajevac's team played all or nothing.

John Pantsil took a free kick, the ball landed on the head of John Mensah, who overtook Muslera's lead. The goal fell to Stephen Appiah, but the midfielder's shot was unexpectedly met by a Luis Suarez clearance. The ball bounced and went to the head of Dominic Adiyiah, who aimed at the unguarded goal. It was a goal... but the Gunslinger put on his savior suit again, although this time he had no choice but to reject with his hands, as if he were imitating his partner Muslera.

The Portuguese referee Olegario Benquerença sanctioned the clear penalty and expelled the attacker who has just returned to Nacional, from Montevideo. From the penalty spot, destiny gave Gyan, one of the Ghanaian figures, the opportunity to make history by installing an African team in the semifinals for the first time. However, his shot hit the crossbar. Suárez, who had left the field bathed in his tears, let out a howl of joy. Uruguay was still standing.

All this happened in that incredible minute that closed the game in the industrial capital of South Africa. It was the spectacular closure of two hours full of illusions on the verge of a nervous breakdown.

That epilogue honored the clash between two teams willing to shed every last drop of sweat in an effort to enter the select group of the four best teams in the world. Uruguayans and Ghanaians had fought tirelessly for victory. They had not played too much, but they never gave up on toasting with intensity to stay with the victory.

Master Oscar Washington Tabárez 's hosts had suffered a premature weight loss: Diego Lugano had to leave the court due to injury and Andrés Scotti entered his place, with a past in Argentinos Juniors. That shock was followed, almost at the close of the initial period, by a much harsher one. Sulley Muntari, a midfielder who in those days wore the Italian Inter shirt, took a distant shot that became unattainable for Muslera.

Uruguay did not take too long to react. Diego Forlán, the highest celestial emblem of that tournament, equalized 10 minutes into the second half with a great goal from a free kick.

As the minutes passed, Tabárez understood that his attack formula was incapable of breaking his rival's rearguard. He decided to leave Edinson Cavani and replaced him with Abreu to accompany the Forlán-Suárez duo. There was a quarter of an hour of action left, but that time and the subsequent half hour were not enough to change the result. Not even those incredible 60 seconds in which the Gunslinger 's hands and Gyan's squandered penalty gave the game a mantle of infinite drama.

There was no choice but to appeal to the definition from the penalty spot. Again the nerves were masters and lords of the scene. The classic ceremony of the player who walks half the field alone to fight a goalkeeper who is as alone as he lived another captivating chapter.

Forlán started the series with a hit. Gyan redeemed himself and tied. The story continued its succession of celebrations on both sides until Muslera contained Mensah's shot. The Uruguayans rubbed their hands together, but Maximiliano Pereira failed. They were saved by the goalkeeper, who denied Adiyiah the goal, the same one Suárez had covered like a goalkeeper the header that could have catapulted the Africans to the next phase.

The fifth shot hit Abreu. In reality, the forward of the thousand and one clubs had asked Tabárez to grant him the opportunity to define the series. He had faith in himself despite the fact that in the last practice he had failed all three attempts in one trial. He was sure of himself. He harbored that typical blind confidence of those who have everything to gain. And, how could it be otherwise, he dispatched with a madness that only he could have happened: he hit the ball and deposited it in the middle of the goal. Richard Kingson, the good Ghanaian goalkeeper, had moved to the right of him. Goal and celestial classification . A feat that was only possible through the hands of Suárez and the madness of Abreu.