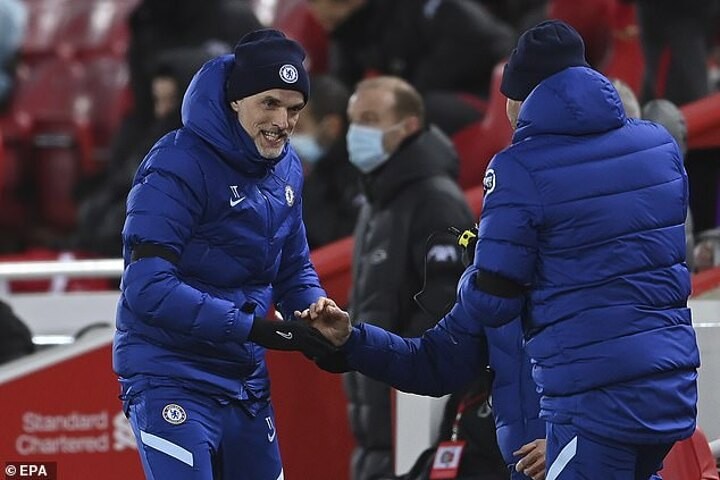 Thomas Tuchel's highly-sought after first win over countryman Jurgen Klopp did not go unnoticed in Germany, with the media back home hailing the 'invincible' Chelsea boss after extending his unbeaten run with the Blues.

Chelsea entered Thursday's clash at Anfield in search of an important three points that would send them into the top four, while their charismatic new coach had a personal score to settle with the Liverpool boss.

Tuchel's career has been entwined with Klopp, with the pair taking charge of both Mainz and Borussia Dortmund as young coaches. As such, comparisons between the two bosses have often been drawn, with the outcome less favourable for Tuchel.

The 47-year-old duly stepped out of Klopp's shadow at Anfield, however, with a Mason Mount strike enough to see off the injury-plagued champions, consigning them to their fifth home defeat of the season.

Thursday's victory means that Tuchel remains undefeated since taking the helm at Stamford Bridge in January. Chelsea have won seven and drawn three of their games since Tuchel replaced Frank Lampard.

And German outlet Bild has lauded the former Paris Saint Germain coach, labelled as 'the invincible one' following his landmark win over Klopp, who is described as being in a 'mega crisis' with the champions.

The report highlighted Tuchel's 'well organised defence' in preventing the Reds from a shot on target until the 85th minute, before adding that Klopp ought to have felt aggrieved by the decision not to award a penalty for a handball by N'Golo Kante.

A rather subdued post-match fist bump between the two managers was noted by the outlet, who warned that Klopp's side not featuring in next season's Champions League is a real possibility.

The Chelsea boss has made a remarkable impact in west London, and revealed that he feels 'part of the group' already.

'We have never lost our courage and discipline,' Tuchel told Sky Sports. 'It was a well deserved win and a great result for us. A very good team performance. I am very happy.

'Everyone was very brave. It was busy, but everyone was sharp. It was a six point game. But the race is still going. '

'I feel like part of the group. We go to an enormous amount of effort and try to help. '

Meanwhile, Klopp said: 'We have to defend the goal differently. Details decide such games and they are currently against us. We had a lot of scenes in which a lot was really good - except for the last pass.

'We have to improve in the crucial moments and show our quality there. We are doing too little at the moment. It's another massive blow.

'If you lose so many games, you don't deserve to play in the Champions League. We have to win football games again. '