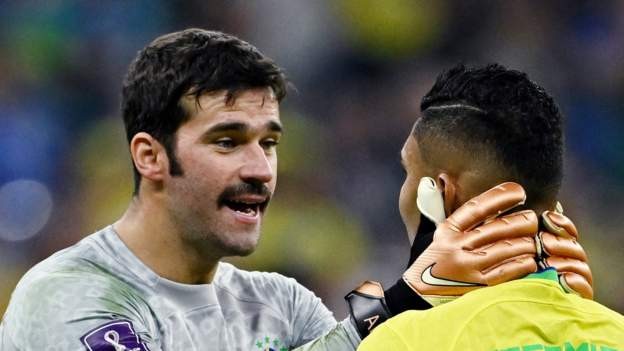 My job when Brazil won the 2002 World Cup was to be invisible on the pitch - if I did it right, it made things easier for the players in front of me, as well as for myself.

It is the same situation now for Casemiro, the defensive midfielder who is at the heart of this Brazil team trying to end our 20-year wait to win it again. He has a great responsibility in my old position.

Just as in 2002, we have plenty of attackers to make the difference this time - not just Neymar, who will miss the rest of the group stage with injury.

I can understand why some people just talk about that part of our team but, to win a World Cup, you have to remember the other parts too.

Whoever the manager chooses to play further forward now, it is still important for us to be defensively strong.

Right now, I think we have the right balance. I am very happy with our back four and also with the players in front of them who teach the side to be solid.

This is where Casemiro's intelligence holds the key.

You have to be smart to play as a holding midfielder for an attack-minded side like Brazil, and you also have to be patient. Let me explain why.

It is not just about being the tough player, the one who tackles everyone. That is only one small part of the whole role, and even then you have to be clever to choose the right time to actually put a challenge in.

Instead, you have to read the game and understand where you should be, which is usually in the middle of everything.

Your position is the most important thing. If you choose the right line on the pitch then, from there, you can see everything and spot any danger - well, most of the time.

For me with Brazil, that usually meant having a few attacking guys further forward and only the centre-backs behind me, with the full-backs in a line between them. If you watch Casemiro, that is where he is too.

From there, you are the one controlling things. You are in control when the ball goes from one side to another - even if you don't touch it - simply because you are where you need to be.

Being the Brazil player who doesn't get the ball

It sounds easy, but the toughest thing for some players to understand about this role is what to do when you don't have the ball, because sometimes in this position you don't get it as much as the others do.

You see some players get distracted when that happens. They want the ball, they don't get it. So they get frustrated and lose position.

That might be only for a fraction of a second, but it's enough. If you vacate the space where you should be, then your team is caught open… and your opponents will have a chance.

Casemiro never let that happen against Serbia in our opening game in Group G, and it has to be the same whoever we play in Qatar.

Casemiro's touches versus Serbia. The one furthest forward is when he had a shot and hit the bar. He did not attempt a single dribble

It would have been easy for him to go forward in a game where we had lots of possession, but he only touched the ball once in the final third of the field - when Brazil were 2-0 up with 12 minutes to go, and he hit the bar with a shot from outside the area.

Instead he kept his discipline, held his territory and was always ready in case we lost the ball.

Even when he got it back, he knew that, in his position, he did not need to run with it.

I was the same. I always thought that at some point the guys up front would lose the ball and that is the time when I would have to run - to get it back, and give it to them to try again!

Graphic showing Casemiro's passes against Serbia. He had a passing accuracy of 85% (55/65 passes) and only attempted four passes into the final thirdWhy Fred is the perfect midfield partner

You cannot do all this on your own, of course.

Casemiro started alongside Lucas Paqueta in Brazil's first group game, but he finished the game alongside his usual partner for the national team, his Manchester United team-mate Fred.

I have watched them play many matches together now and, for Brazil, they have lost only once - the 2021 Copa America final against Argentina.

It works very well because Casemiro sits at the back like I did and Fred is more mobile, like Kleberson was when he was next to me in our midfield at the 2002 World Cup.

But Fred is also defensively strong. He is not just in front of Casemiro, he plays alongside him too and helps him do his job.

They have an understanding now and I'm hoping this partnership will work well again at this World Cup. If we are going to win it, it will play such an important part.