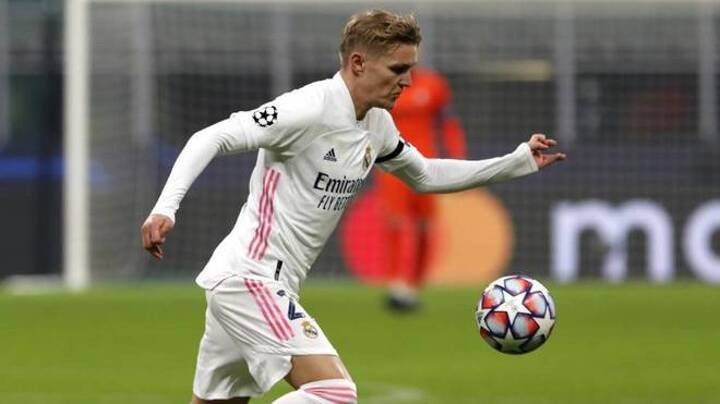 Martin Odeegard played a key role in Real Madrid's win over Inter in Italy and he was missed in the first 70 minutes of the match against Alaves for exactly the same reasons.

In the Champions League match he contributed both in the build-up and the team's pressure in the middle third, something that Los Blancos lacked against Pablo Machin's side last Saturday.

Real Madrid went from a season-record 796 passes that they registered in Italy to 563 against Alaves, with their efficiency dropping from 92.21 percent in pass completion to 87.92 percent.

The team's style of football between the two games changed too. Against Inter, Los Blancos were fluid in midfield and sharp in attack, while against Alaves they attempted to break down the opponents' defence mainly through crosses, registering a total of 25 (40 with corner kicks) at the Estadio Alfredo Di Stefano.

There are Real Madrid fans who may not be aware of Odegaard's playing style. The Norway international is not an exquisite dribbler and at Real Sociedad he shone with his good positioning and ability to find his teammates in space.

Odegaard makes those who play around him better too. In Milan, Toni Kroos passed the ball 132 times with 96.97 percent accuracy, yet he produced only 63 passes against Alaves, completing 90.48 percent of them.

Meanwhile, Luka Modric went from 108 passes and 92 percent completion in Italy, to 43 passes and 84 percent accuracy in Madrid.

While Real Madrid circulated the ball brilliantly in the midfield and effectively managed to soak up Inter's pressure, in Valdebebas they struggled to build from the back, find the final pass or ways to open up Alaves' defence.

Kroos intercepted eight balls and Modric another nine in Italy, yet they managed to intercept one and five, respectively, on Saturday despite facing a team whose game was more direct than Inter's.

Odegaard has not stolen the limelight in any of the games he has played this season, as he is not the player who will produce highlight reels for Los Blancos. However, he is making a great effort to establish himself into a midfield that consists of three of the best players in the club's history.