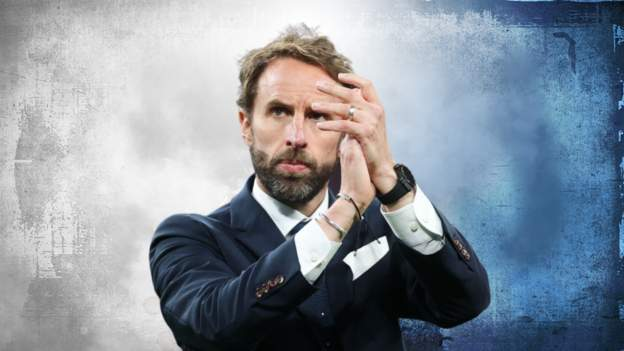 England manager Gareth Southgate can move preparations for the 2022 World Cup in Qatar through the gears after qualification was confirmed with a 10-0 thrashing of San Marino.

Southgate will have a mixture of friendlies against strong opposition and the competitive edge of the Uefa Nations League to finalise his plans for England's first World Cup game a year from now.

He will have extra time too given the later staging of the tournament and, even though England have once again cruised through qualification, Southgate knows so much can happen to shape his thoughts.

Are England in good shape for Qatar?

Southgate and his players have suffered no discernible after-effects from the devastating disappointment of their penalty shootout defeat by Italy in the Euro 2020 final at Wembley in July, going seven games unbeaten since.

Optimism should be tempered by a recognition of unremarkable performances in drawing away to Poland and at home to Hungary, but the feeling remains that this England team can continue on an upward curve.

What remains unknown is whether England can get the job done against true world-class opposition who can control possession, and whether they - and by association Southgate - are overcome by conservatism when the pressure valves tighten, as when they took early leads against Croatia in the 2018 World Cup semi-final and against Italy in July.

England will also need to keep up the good results if they are to be among the top seeds when the draw is made in Qatar in April.

Given the timing of this World Cup, which interrupts the domestic calendar, Southgate has already admitted that the co-operation of clubs will be key.

With domestic fixtures pausing only days before the tournament begins there is an increased risk of injury disruption, making communication with clubs on medical matters and form even more crucial.

So Southgate is facing a testing 12 months. But he has at his disposal a potent mix of proven experience and exciting youth which he can blend even further before Qatar.

What are Southgate's key dilemmas?Jordan Pickford has been Gareth's Southgate's number one goalkeeper since breaking into the side shortly before the 2018 World Cup

As usual, this will focus on form and formation - with 12 months for players to either rebuild confidence or be replaced by so-called "bolters", the late chargers who come from nowhere into a squad and even the team.

Jordan Pickford's place as England number one is, as usual, a source of debate, particularly given Aaron Ramsdale's outstanding form since his move to Arsenal.

One place where this is not a pressing matter for discussion is inside the England camp. Pickford had an outstanding Euros and is deservedly first-choice, as he has been for more than three years.

Southgate works on loyalty and the mantra that Pickford has never let him down. He has, in fact, done more than not let England down. He has kept 20 clean sheets in 43 appearances, has a 76.9% save ratio and - according to Opta stats - has yet to make an error leading to a goal in his England career.

It was almost a case of giving the public what they wanted. It was not a success as England were held 1-1.

Southgate baulks at suggestions this is a negative outlook, and he certainly made his case when using attacking wing-backs in this framework, as he did when beating Germany in the Euro 2020 quarter-final, running Italy close in the final and overwhelming Albania 5-0 at Wembley.

Reece James and Ben Chilwell fulfilled those roles against Albania while Southgate also has Liverpool's Trent Alexander-Arnold and Manchester United left-back Luke Shaw at his disposal, along with the experienced Kieran Trippier. For all the lobbying for the brilliant Alexander-Arnold, Southgate currently seems to prefer the more defensively sound James - whose attacking qualities are also moving on to another level.

Does he stick with that favoured formation or will that embarrassment of riches, which also includes the brilliant Borussia Dortmund teenager Jude Bellingham, allow Southgate to be more flexible and bold in Qatar?

And what about form? Harry Kane returned to goalscoring form with a hat-trick in Friday's 5-0 win against Albania before adding four in the rout of San Marino on Monday

Some of Southgate's most trusted and stellar names have had their struggles. Will they improve and what will he do should they remain in a dip?

Captain Kane will be a certain starter barring some catastrophic decline, even though he has been struggling at Spurs. He showed what he is all about in the latest round of qualifiers, with seven goals in two games.

Harry Maguire won warm words from Southgate despite dreadful form at Manchester United, while Raheem Sterling was lively against Albania despite being marginalised at Manchester City.

For all the questions and criticism, they still remain players who have delivered for Southgate and it is hard to see England's World Cup campaign starting without them but - as stated - there is a long run to the tournament and plenty of chances for the competition.

Who can make a big England breakthrough?Emile Smith Rowe, Conor Gallagher and Jude Bellingham are among a group of young players who could force their way into Gareth Southgate's World Cup plans

Southgate's choices are piling up and there are plenty of young England players who will feel they have a chance of shaking up selection to start that first game in Qatar.

England's manager already has to contend with plenty of noise surrounding Foden, Grealish and Mount - while Bellingham looks a real jewel. He has looked mature beyond his 18 years and a natural fit at any level.

Bellingham has it all as a midfield player and another year's experience at international level, as well as in the Champions League and Bundesliga, could make his claims irresistible given his current rate of progress.

England's current squad has also seen Arsenal's 21-year-old Emile Smith Rowe make his debut and Conor Gallagher, outstanding on loan at Crystal Palace from Chelsea and still only 21, also brought in. Liverpool's young duo of Harvey Elliott, when he is back from injury, and Curtis Jones show rich promise, as does Trevoh Chalobah at Chelsea.

And there will be more who will emerge. Southgate will have tough, but exciting, choices.

Can Qatar 2022 define Southgate's England legacy?Gareth Southgate will have been England manager for six years by the time the 2022 World Cup begins

Southgate has a tournament record second only to 1966 World Cup winner Sir Alf Ramsey after taking them to a World Cup semi-final and a Euros final. Qatar 2022 is the chance to cross the final frontier after 56 years.

England will be among those talked about as potential winners, but have they done enough to be considered among the big favourites? Not yet. Too many questions remain unanswered against the best.

Regardless, Southgate's legacy will be an impressive one - based on his record on the field, his statesmanship, his willingness to speak out against racism and hooliganism, including in his own country, and his ability to create an environment that has made England's football team popular with its public.

Meanwhile, he has earned another chance to shoot for the biggest prize of all.