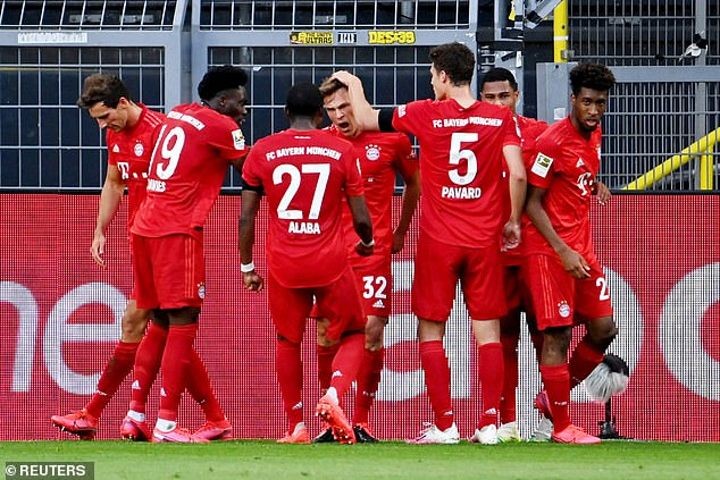 The Bundesliga remains the centre of football's attention and the action continues to come thick and fast as we approach the fourth matchday since the restart.

While Bayern Munich have drastically increased their chances of winning an eighth consecutive Bundesliga title with that midweek victory over Borussia Dortmund, there's still plenty to play for.

The race for the Champions League and Europa League places is especially interesting, while there's an almighty scramble to avoid relegation as teams slip and slide down the bottom.

Sportsmail sets up another packed Bundesliga weekend with some of the key talking points and where to watch the action.

Can Bayern move another step closer to eight in a row?

You'd be forgiven for thinking that a lot of the excitement that surrounded the Bundesliga's return has been sucked out by Bayern's midweek Klassiker win over Borussia Dortmund.

What was shaping up into a genuinely exciting title race now appears to be a procession to eight championships in a row for the Bavarian powerhouse.

The brutal reality is that's precisely what Bayern do best, extinguishing the hopes of their rivals with a relentless ability to keep winning.

But, despite a seven-point lead over Dortmund with six rounds of matches left, they're not over the finish line quite yet and we are living in extraordinary times after all.

Bayern still need to play Bayer Leverkusen and Borussia Monchengladbach during the run-in - the last two clubs to beat them in any competition - and so won't want to drop points at home to relegation-threatened Fortuna Dusseldorf on Saturday teatime.

Interestingly, Dusseldorf are the only one of the current 18 Bundesliga teams Robert Lewandowski hasn't scored against (he scored against Bayern for old club Dortmund) and you'd back him to complete the set against Fortuna's leaky defence.

However, despite claiming a memorable 3-3 draw at the Allianz Arena last season, the omens aren't great for them.

It's 30 years since they recorded a win over Bayern in the Bundesliga and the champions-elect are now 14 games unbeaten in the league, winning 13 of them, either side of the two-month pause.

Will we see Jadon Sancho start as Dortmund try and bounce back?

Tuesday night's defeat was a huge blow for Dortmund but they need to keep soldiering on and apply as much pressure on Bayern as possible along the finishing straight.

The chances are they'll be 10 points adrift by the time they head to Paderborn on Sunday afternoon but at least playing the bottom side is an ideal opportunity to bounce back.

Jadon Sancho hasn't started any of Dortmund's three matches since the resumption, limited to substitute appearances as he tries to regain full match fitness.

But with star striker Erling Haaland set to miss this game because of the knee injury that forced him to exit Tuesday's game with 20 minutes left, Sancho is more likely to start this time.

The England international has 14 goals and 17 assists in the Bundesliga this season and has every chance of adding to those highly impressive totals against a Paderborn side very much drinking in the last saloon.

They are nine points adrift of safety having drawn all three of their games since the restart and they really do need a memorable win here to keep faint hopes alive.

However, they're certainly not afraid of Dortmund. In the reverse fixture back in November, two goals from Streli Mamva and another from Gerrit Holtman gave them a 3-0 half-time lead that stunned the 81,365 crowd at Signal Iduna Park.

Dortmund rallied to earn a point thanks to a 94th-minute Marco Reus equaliser but maybe there's something about Dortmund's game that Paderborn can exploit.

With pressure mounting on Dortmund boss Lucien Favre after the Bayern defeat, something enhanced by his cryptic comments post-match, he knows they need to finish the season with a flourish even if the title has gone.

In the potential absence of an enduring title race, there may be more interest in the battle for the Champions League places.

RB Leipzig in third place have a two-point cushion on Borussia Monchengladbach and Bayer Leverkusen, who are tied on 53 points in fourth and fifth place respectively.

Leverkusen, whose excellent form was brought to a crashing halt by Wolfsburg on Tuesday, kick off the Bundesliga weekend with a testing trip to Freiburg on Friday night.

Peter Bosz's team need to press the reset button after their run of 11 wins in 12 matches ended but can take comfort in the fine form of Kai Havertz and the fact flying winger Leon Bailey hasn't started a game since the resumption.

Freiburg have proved themselves exceedingly tough to beat this season but were left frustrated by throwing away a 3-1 lead to only draw at Eintracht Frankfurt in midweek.

That left them with a four-point gap to bridge to Wolfsburg in the final Europa League spot and so the Black Forest side could do with all three points against Leverkusen.

Monchengladbach will have to wait until Sunday for an opportunity to respond but will be strong favourites at home to Union Berlin.

Their midweek stalemate with Werder Bremen was enough to move above Leverkusen again, having lost 3-1 at home to them last Saturday,

It won't be lost on Gladbach that they led the Bundesliga when they lost 2-0 to Union back in November, that result signalling the end of their early season winning form.

The Berliners have collected just one point from nine since the restart, however, and are starting to get a bit anxious as they sit four points above the relegation play-off place.

Can Schalke ease the pressure on David Wagner?

These aren't good times at Schalke. They have been absolutely woeful since the Bundesliga returned, smashed 4-0 by rivals Borussia Dortmund, humbled 3-0 at home by Augsburg and then defeated 2-1 by Dusseldorf having taken the lead.

It's all ramped up the pressure on manager David Wagner and hit their chances of qualifying for Europe hard as they've slid down to ninth amid a nine-game winless run.

With stories about their parlous financial situation bubbling away in the background, a situation exacerbated by the absence of fans, they could do with getting into the Europa League.

Saturday offers an opportunity to stop the free fall when they take on relegation candidates Werder Bremen at home.

Bremen, second bottom and six points from safety but with a game in hand, held Gladbach in midweek having won 1-0 at Freiburg last weekend.

With Fortuna Dusseldorf ahead of them unlikely to get anything at Bayern, Bremen will sniff an opportunity to make up ground against under-performing opponents.

It's getting claustrophobic down the bottom

While Bremen have ground to make up, it's getting tight above them. In Germany, the third bottom side go into a relegation play-off against the side that finishes third in the 2. Bundesliga.

At the moment, Fortuna Dusseldorf occupy that place but their midweek win saw them close the gap to Mainz and Eintracht Frankfurt immediately above them.

Mainz, who could only manage a draw at Union Berlin on Wednesday despite playing much of the match against 10 men, are just a point above Fortuna now.

They host Hoffenheim on Saturday and really could do with getting something to ease relegation fears.

Eintracht Frankfurt, who are two points ahead of Fortuna, came from 3-1 down to draw with Freiburg in midweek, arresting a five-game losing streak.

But they travel on Saturday to a Wolfsburg team brimming with confidence after that 4-1 win at Leverkusen that bolstered their European hopes.

Really, you wouldn't say either Augsburg or Union Berlin, both four points above Fortuna, can be considered at all safe from demotion and it promises to be a fascinating run in.

Last season, Hamburg somehow conspired to win just one of their last nine matches and miss out on promotion back to the Bundesliga.

It was a quite incredible bottle job from a club that only just lost their proud record of never being relegated from the Bundesliga in 55 years.

There's a chance something similar may be unfolding this season. Thursday night saw Hamburg carelessly chuck away a two-goal lead to lose 3-2 at promotion rivals Stuttgart.

That meant Stuttgart leapfrogged them into the second automatic promotion place, leaving Hamburg on course for the play-off.

However, having failed to win a game since the restart, Hamburg are now feeling the breath of teams closing the gap behind them.

Fourth-placed Heidenheim are just one point behind and Darmstadt in fifth and are four points adrift. From a fairly comfortable position, the chase is very much on.

Hamburg host second-bottom Wehen on Sunday in a match they're odds-on to win. It will be interesting to see how rattled they really are.