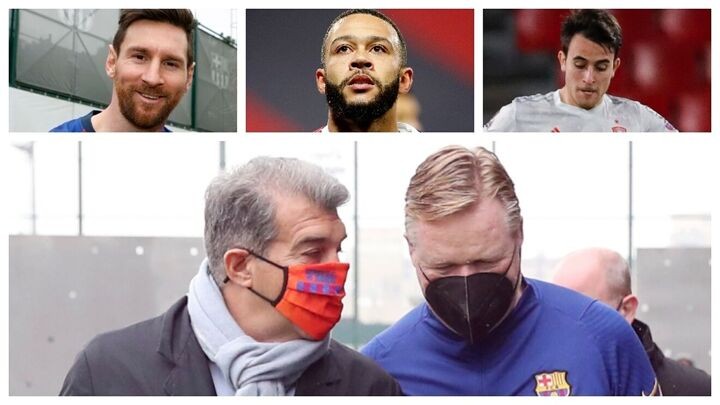 With Barcelona's defeat to Celta Vigo meaning they can no longer win the LaLiga Santander title, attention is now turning to the transfer market, with Joan Laporta getting his first crack at decision making since he returned as president.

With his first spell at the club having been marked by bold and numerous moves in the market, fans are eagerly anticipating just what he will do this time around, and the Laporta show has a number of questions to provide answers to.

He will not be able to do everything he wanted to, mainly due to the cataclysmic financial situation the club finds itself in, but there are two pressing issues that need to be resolved quickly.

The first of which will have an influence on what happens in the rest of the market, and it comes down to whether or not Ronald Koeman will continue as Barcelona coach.

The Dutchman has one year left on his contract, but the poor results over the last month, just when the season got decisive, have put a lot of doubt in the mind of Laporta.

There are rumours every day, but it's worth remembering that presidents usually like to make their own coaching appointment, even if just to take a degree of the credit if it goes well. Laporta made two such decisions in his first stint in charge, hiring Frank Rijkaard and Pep Guardiola.

Both coaches won the Champions League for Barcelona and, in part, this is why Laporta's premiership is remembered so fondly by so many.

Can Messi be convinced?

The second emergency for Laporta is the small matter of Lionel Messi's contract situation. As things stand he is free to leave on June 30, although he hasn't yet begun speaking to other clubs as football laws would have allowed him to from January 1.

With the absence of the final results of the fiscal audit to determine the scale of the club's financial issues, Laporta must make an offer to Messi that both convinces him from a salary perspective and a project perspective.

Messi has no interest in being the best-paid player in the world but doing so with an ailing team at the Camp Nou. There needs to be a balance, and this is where the president needs to make some moves in order to convince Messi.

What reinforcements are coming?

Whilst a couple of transfers may directly influence Messi's decision, Laporta will only start to restructure the squad in earnest once the above two issues have been solved.

Eric Garcia's Bosman arrival has been closed for almost a month, and he will be announced as a Barcelona player after Manchester City's Champions League final is complete.

Memphis Depay has an agreement to join the Blaugrana on a free transfer, but crucially he will only join if Koeman is still the coach, with Laporta having doubts about the Lyon forward.

There is also an agreement in principle to sign Sergio Aguero on a free transfer too, although the Argentine is only interested in signing if Messi stays at the Camp Nou.

These will not be the only signings, although they are the highest profile ones. Barcelona have to work within a strict budget this summer, although Laporta and the technical department are keen on adding a goalscoring striker.

Erling Haaland was a target, but that is seen as difficult bordering on impossible after Borussia Dortmund qualified for the Champions League next season. Alex Isak is a far more cost-effective solution, and Barcelona have long been admirers of the Real Sociedad youngster.

Georginio Wijnaldum is another midfielder who has worked closely with Koeman before, and his Liverpool contract expires on June 30. He would love to join Los Cules, but again there is a sense that this won't happen if Koeman departs.

As was the case last summer, the Blaugrana need to get rid of some players in order to raise funds and lower their salary bill.

Luis Suarez was sacrificed in 2020, although it's difficult to see just who can leave this summer.

Ousmane Dembele may be sold if he doesn't agree to a contract extension, whilst any of Samuel Umtiti and Clement Lenglet may be at risk due to the arrival of Eric Garcia and the impressive rise of Ronald Araujo.

Offers for all players will be analysed, however, with the message from Laporta being that nothing is off the table this summer. It's going to be quite the ride.