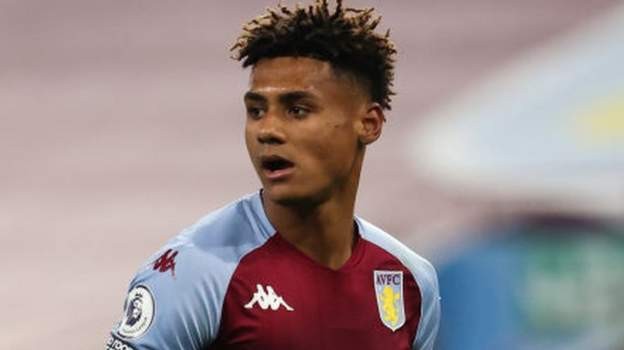 While sweeping the floor of a non-league changing room, the prospect of scoring a perfect hat-trick against the Premier League champions would have felt like the stuff of fantasy for a teenage Ollie Watkins.

But the 24-year-old had never been one for giving up on turning dreams into reality.

Rejected at his first trial with a professional club, Watkins' rise to prominence is as impressive as it was swift, becoming Aston Villa's club-record signing at £28m.

From knock-back to playing left-back

Born in Newton Abbot in Devon, Watkins was one of many hopefuls keen to impress during a trial at one of the clubs local to him - Exeter City - but was initially not taken on.

"There was just the feeling he was not ready," Simon Hayward, head of Exeter's academy at the time, told BBC Sport.

"The decision was nothing to do with his technical ability. Coming in with us would have meant training three times a week for around an hour and a half, while our games would all involve quite a bit of travel.

Despite his prolific scoring record in recent years, Watkins' breakthrough at Exeter was as a left-back

"I didn't think he was ready for the commitment at that age that would come with the academy."

Hayward and his team kept tabs on the young Watkins and one year later decided he was ready to be a given a chance.

"Luckily I had that time to improve and become a better player," said Watkins.

While his favoured role was as an attacking left winger - the position his idol Thierry Henry started in - Exeter were keen for Watkins to develop the other parts of his game as well.

"The academy programme was designed to create players who could play in multiple positions," Hayward added.

"You never know where an opening is going to come in for your first-team debut and if you have only played one position, then you are very limited."

As Watkins got older and approached the age players usually started breaking into the first team, he was sent on loan to non-league Weston-super-Mare to gain experience.

"It is a bit like driving - you really learn once you have passed your test," said Weston-super-Mare's academy senior phase manager Mark McKeever, who worked with Watkins during his time at the club.

"Football is a bit similar. You get a real grounding in senior football. He made mistakes but he would always learn from them very quickly. Ollie was a very intelligent player."

Watkins scored 10 goals in those 25 games but, even then, progression to the Exeter first team was not straightforward.

His first real opportunity with the Grecians came during a pre-season tour of Scotland in 2015.

Watkins was not originally scheduled to go with the first team but an injury to the club's left-back provided an opening, although he would have to play in a position he was unfamiliar with.

But his willingness to adapt caught the eye and he was later tried out in midfield by then manager Paul Tisdale.

"I think it was a little bit make or break," said Hayward.

"He was told that he needed to make an impact on the game from a defensive point of view or he wasn't going to play. All of a sudden, he was the hardest working player in the team week in week out.

"We would show videos to the academy lads of Ollie working his socks off. He would run past three or four team-mates to support an attack and would then be running past those three or four players again to get back and help defend. His work-rate was phenomenal."

At Weston-super-Mare, he would help sweep the floor of the changing rooms while, shortly after breaking through at Exeter, it would be his role to make coffees for his team-mates and the coaching staff during away trips.

It was those sorts of tasks he would later say helped keep him grounded, and was a continuation of the work done at the Exeter academy to ensure players developed into well-rounded individuals.

"We wanted decent young men to be coming through the academy," Hayward said.

Watkins could not have asked for a better footballing education.

Between 2014 and 2018, Exeter's academy graduates earned the club in excess of £5m in transfer fees, with Chelsea's Sheffield United loanee Ethan Ampadu, and Swansea's Matt Grimes also getting their grounding at St James Park.

Non-league to Premier League - England next?Watkins scored 25 goals in his first full season as a centre-forward

In his breakthrough year at Exeter, Watkins scored eight goals in 20 games and followed that up with 13 in 45 games the following season.

A move to Brentford came next and when striker Neal Maupay joined Brighton on the back of hitting 25 goals in the 2018-19 season, Watkins replaced the Frenchman in a more central role.

The impact of that switch was immediate as Watkins matched Maupay's tally the following season.

"He's driving the team," Brentford boss Thomas Frank said after Watkins hit his 25th goal. "Look out there how hard he works - it's a joy to have a striker like that. He's a coach's dream.

"He's one of the hardest, if not the hardest, working offensive players in the league, and he's also the top scorer. That's not a bad combination."

After marking his Premier League debut in explosive fashion, Watkins has been backedexternal-link to earn recognition from England boss Gareth Southgate in the near future.

Having already turned one dream into a reality through hard work and dedication, it is hard not to see Watkins doing the same again.

New drama - Roadkill: Can a government minister outrun the secrets of his past?Bringing Football Back: Behind the scenes of a club reborn