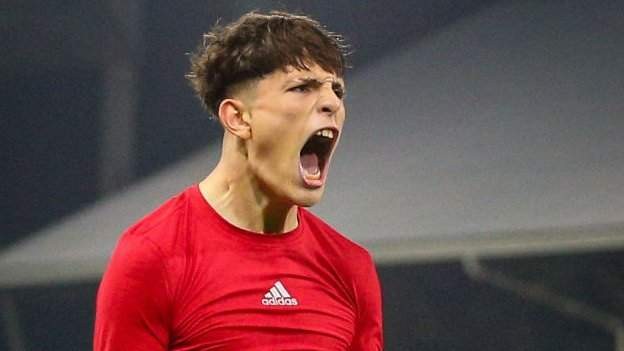 At 18 years and 135 days, Alejandro Garnacho became the youngest player to score a 90th-minute winner in the Premier League for more than 13 years

It has been some week for Manchester United teenager Alejandro Garnacho, who is "proving the joy of football" after scoring a 93rd-minute winner against Fulham - his first goal in the Premier League.

The 18-year-old will not be heading to the World Cup with Argentina but can reflect on a breakthrough few days after being made to earn the trust of boss Erik ten Hag.

The Dutchman warned the youngster he must keep the right "attitude" and "approach" after an outstanding half-hour cameo in the 4-2 Carabao Cup win over Aston Villa on Thursday, when he provided two assists.

It came after his experience on United's pre-season tour of Thailand and Australia, when he was prevented from playing in matches as a disciplinary measure after twice turning up late for team meetings.

Garnacho seems to be taking his manager's advice on board and, after replacing Anthony Martial in the 72nd minute at Craven Cottage, grabbed a dramatic winner in stoppage time with practically the last kick of the match as United beat Fulham 2-1.

The visitors, who had earlier taken the lead through Christian Eriksen's first goal for the club before ex-United man Dan James equalised for Fulham, were fortunate to get the three points.

Not that the delighted teenager, who quickly tore his shirt off (later getting a booking for it) would mind too much about that as he headed towards his side's fans in delight.

"He has a lot of talent and his work rate together with the talent makes a big difference with us from the bench," team-mate Bruno Fernandes told Sky Sports. "It's not the first time he makes a big impact for us.

"We're really happy for him and know he can give us goals, assists and prove the joy of football.

"Nobody likes to be on the bench so the attitude he has when he comes on has been fantastic. He deserves the chances he's been having and he's got his rewards. That's what football's about."

This was the last game in the Premier League before the World Cup in Qatar, which starts on 20 November, with the next top-flight domestic game on 26 December.

United boss Erik ten Hag said it could be a potentially "dangerous" period for Garnacho and urged him to not "lose focus".

"He has had such an impact and it shows the talent, but he still has a long way to go and he has to keep his feet on the ground," said Ten Hag, trying to dampen the expectations levels on someone so young.

"He will be recognised by everyone so it is important to confirm it [when on the pitch].

"He now has momentum and if his attitude is good he will keep going. The danger is it's four weeks, no games and [potentially] losing focus.

"If he stays with the same attitude his progress will keep going, if not it will be the other way around."

Garnacho was born in July 2004 in Madrid, Spain and represented the country of his birth at under-18 level, before making his debut for Argentina at under-20 level in 2022. He has been previously called up to Argentina's senior squad but is yet to make an appearance.

Garnacho signed his first professional contract with United in July 2021 and made his debut against Chelsea in April, before making a late substitute appearance against Brighton in Ten Hag's first competitive game in charge.

His first United goal came in the 1-0 win against Real Sociedad on 3 November and Ten Hag admitted his surprise at Garnacho's recent impact.

"It would be weird if I said I could [expect this] before," added Ten Hag. "We saw his improvement and in the last few months we could see his potential and it was time to bring him in.

"He had such an impact, we couldn't have thought that would happen."

The victory leaves United fifth in the Premier League, but only three points behind fourth-placed Tottenham with a game in hand on Antonio Conte's side.

United came sixth last season after they sacked Ole Gunnar Solskjaer last November with Michael Carrick temporarily taking over before Ralf Rangnick was appointed as interim manager until the end of the season.

Ten Hag, who guided Ajax to the Dutch Eredivisie title in 2021-22 before coming to Old Trafford in the summer, has now won 14, drawn two and lost five of his 21 matches in all competitions.

However, they have only lost once in 12 matches since a humiliating 6-3 defeat against bitter rivals Manchester City at the beginning of October.

"We have made massive progress but we can see where we have to improve if we are going for trophies - and those are the ambitions we have," added Ten Hag.

"We're happy with the progress attitude wise, the team spirit and competitiveness. You can see we have improved in resilience, belief and to win this game was difficult.

"But we have to make progress in closing the game out. We allowed Fulham to come back into the game after a mistake."