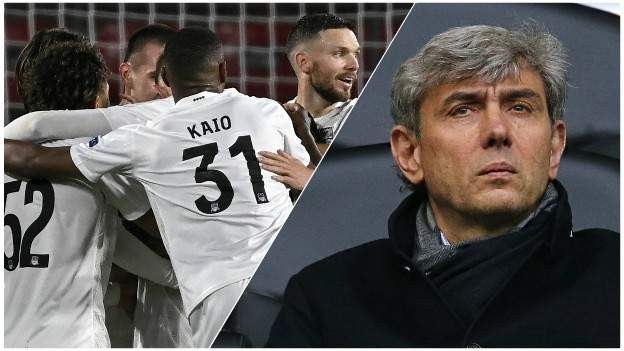 Sergey Galitsky made his money from founding a Russian supermarket chain

In the age of the super-club, the Champions League will arrive in rare new territory on Wednesday when Chelsea land in southern Russia.

Their opponents are FC Krasnodar, upstarts by anyone's measure, but this is a club with a uniquely compelling twist.

The province of Krasnodar Krai was frontier country in the days of the Russian Empire. These days, Krasnodar is a calmer place to be.

Or at least, it will be until Chelsea touch down.

The game, the club's first ever home Champions League group-stage match, is a sellout - within the Covid-19 restrictions allowed by the Russian authorities. A phenomenal amount of effort, and no little heart, has gone into turning the young club, only founded in 2008, into an outfit ready to compete at this level.

Behind it all is the controlling hand of a singular maverick. Sergey Galitsky, founder of the supermarket chain Magnit, sits alone in the Russian billionaire community.

Whilst most of the country's super-rich made their money buying up Russia's natural resources at the fall of the USSR, Galitsky, 53, built his nationwide retail business the old fashioned way, with hard work, grit and innovation.

It's a not-insignificant distinction in the eyes of a population that suffered hardship throughout the 1990s, while the oligarch class scooped up the country's natural wealth.

A Russian business insider, who asked not to be named, sums up Galitsky's rise: "Oligarch by definition refers to someone who uses political connections to make money.

"Galitsky is different. He is not an oligarch, he is self-made. He started a cheap grocery store in Krasnodar from scratch in 1998. Back then, Russia lacked a modern retail chain, and Galitsky's model achieved huge success."

Krasnodar were founded a decade later in 2008, entering at the ground floor in Russia's regional third tier. The motivations were simple: the owner's love for the game and a desire to build something of lasting benefit to his home region.

Remy Cabella (right) will be one of the more recognisable players in the Krasnodar squad to English fans, having played 31 Premier League games for Newcastle

Since then, it's been a case of slow and steady wins the race. Krasnodar have built their club from the bottom up, eschewing the pursuit of big-money foreign signings in favour of heavy but calibrated investment in infrastructure, culminating in their first Champions League appearance with last week's 1-1 draw at Rennes.

"It's breathtaking. Everything down to the medical facilities, player recovery - everything you could dream of in a top club, Galitsky had already built it by the time Krasnodar was two or three years old."

Galitsky's is one of only four clubs to be privately owned in Russia's top flight. This is not a football ecosystem that yields financial rewards; rather success is usually won thanks to backing from big state interests, such as the oil giant Gazprom at Zenit St Petersburg.

His stated aim is to one day field an XI consisting wholly of academy graduates. That may be some way off, but the club have enjoyed huge success at youth level in Russia. They won the national under-18 title in 2018 and took Real Madrid to a penalty shootout in front of a sellout 35,000 crowd at the state-of-the-art Krasnodar Stadium in the last 16 of the Uefa Youth League.

"I don't want any [Thomas] Tuchels or any other foreigners," Galitsky said in a 2018 interview, in reference to Paris St-Germain's German manager. Instead, he went that summer for the man who had led the youth team to that tie with Real, Krasnodar-born and bred Murad Musayev.

Musayev has managed the youth and reserve teams at Krasnodar

Musayev represents everything Galitsky is about. Young - he began his coaching career in 2005, aged only 22 - local, and entirely a product of the Krasnodar infrastructure, a special relationship has developed between manager and owner.

"It's an honour to work with him but also a great responsibility," says Musayev. "He will argue with you on every point, make you fight for your opinion. He can speak about physical training, about set-pieces or specific passages during the match. He has a phenomenal understanding of football, as well as business."

The pace of change - from the regional leagues to the Champions League in 12 seasons - has startled all except those who have seen it from the inside. Former striker Movsisyan, who left the club for Spartak Moscow in 2012, has still never seen anything else like it.

"Normally at a club you see change every two or three years - that's the evolution cycle," he says. "At Krasnodar, things changed every month. They were learning and implementing that learning constantly."

Against Chelsea, they will have a chance to show the world just how far they've come.