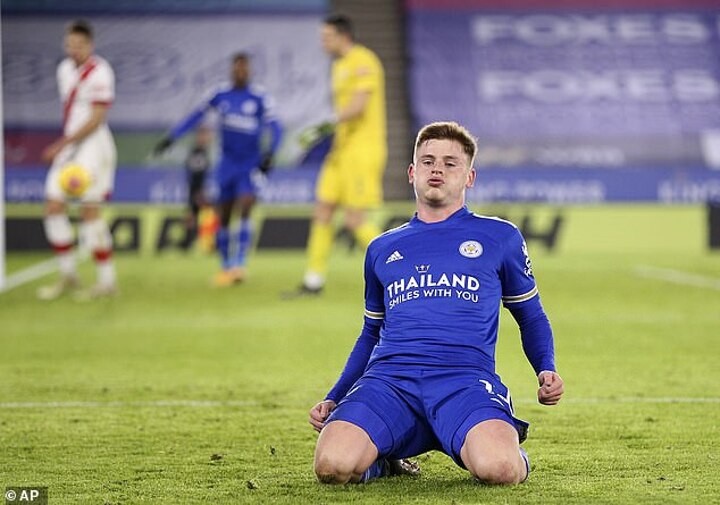 The date is October 19, 2019 and Leicester have just beaten Burnley 2-1 to maintain their impressive start to the season – yet manager Brendan Rodgers has a message for his wide attackers.

'Our wingers need to do more, both in terms of goals and contributions,' he said. 'You can't go through the season as a winger with one goal or two goals. There needs to be greater efficiency if we want to be at the top end of this league.'

For one player in particular, the penny dropped. When Harvey Barnes scored in an FA Cup victory over Wigan on January 4 last year, it started a run of 15 goals in 44 matches in all competitions. This season alone, the 23-year-old has 10 in 19 starts across the Premier League, Europa League and FA Cup. None have been penalties.

With Euro 2020 – as things stand – five months away, Barnes is making an increasingly convincing case to England manager Gareth Southgate.

His tally this term is better than those of Raheem Sterling, who has eight in 21 starts, and Jadon Sancho, who has six in 19. Both Sterling and Sancho are fixtures in the England squad; Barnes earned his first cap in a friendly against Wales last October but was not chosen for the next get-together.

'He has gained real confidence playing at this level,' said Rodgers. 'If you're a winger or an attacking player, your job is to create and score goals.

'If you're scoring two a season as a winger you won't be playing at the highest level for that long. So you have to produce and thankfully for him he is a great learner.

'He has some unique talents. Even if he is not at his best in a game he carries such a threat, and when he is playing at the top of his game he is a joy to watch.

'He is very direct, he is a ball-carrier, he takes you up the pitch, he is so fast – he is such an exciting player. It's been about encouraging him to get into areas where he can score and in virtually every game he plays, he looks like he can score.'

Barnes' rise is all the more impressive when you consider he has done it the hard way. This was not a teenage superstar in the mould of Wayne Rooney who immediately became a key player at the top level.

He excelled in sprinting and distance running at school and had timely advice from his father, Paul, a fine goalscorer who played for eight clubs in a 16-year career in the Football League.

Barnes' first loan spell was with Milton Keynes Dons, four years ago, where he scored with his third touch after coming on as a substitute against Northampton with 11 minutes left.

During his next stint, at Barnsley in the first half of the 2017-18 season, Barnes shared a flat with Bournemouth midfielder David Brooks, who was then at Sheffield United, after the pair had become friends playing international football at junior levels.

The key loan move, however, was to West Brom for the early stages of the 2018-19 campaign.

Encouraged by his father to spend as much time as he could with his new team-mates, Barnes would have dinner with senior players like Jake Livermore and Gareth Barry and their guidance paid dividends on the pitch.

After scoring nine goals in 26 matches and helping Albion challenge at the top of the table, Barnes was recalled to Leicester in January.

The loan periods were vital for Barnes' development not just on the pitch, but off it, too. 'It gave him that little bit more confidence around the players,' said his father Paul.

'In a Premier League dressing room as a younger player you have to be a strong character. You have to earn the right to have the ball passed to you, because your team-mates trust you. You have to be able to say 'I'm going to show you'.

'Harvey is very down to earth and once he feels settled he will blossom and develop. He'll take his time to settle in but then he will prove himself with his actions.'

Barnes is under contract at King Power Stadium until 2024 but his current terms will surely be improved if he continues to progress at this rate. His form has not gone unnoticed by Leicester's Premier League rivals, either.

The 23-year-old will line up against Chelsea on Tuesday evening having starred in wins over high-flyers Southampton, Stoke City and Newcastle in recent weeks and could be the key to unlocking Frank Lampard's side.

Should the Foxes win at the King Power, they would go top of the table – leapfrogging both Manchester clubs in the process.

These are exciting times, then, with Rodgers convinced that the best is still to come.

'He is making more runs into the box,' noted the Leicester boss. 'When I first came, he was outside the box a lot, where you're rarely going to score.

'Now he makes runs to the near post, far post, middle of the goal. Now it's about maintaining that hunger to score. His numbers are improving all the time and I suspect that will continue.'