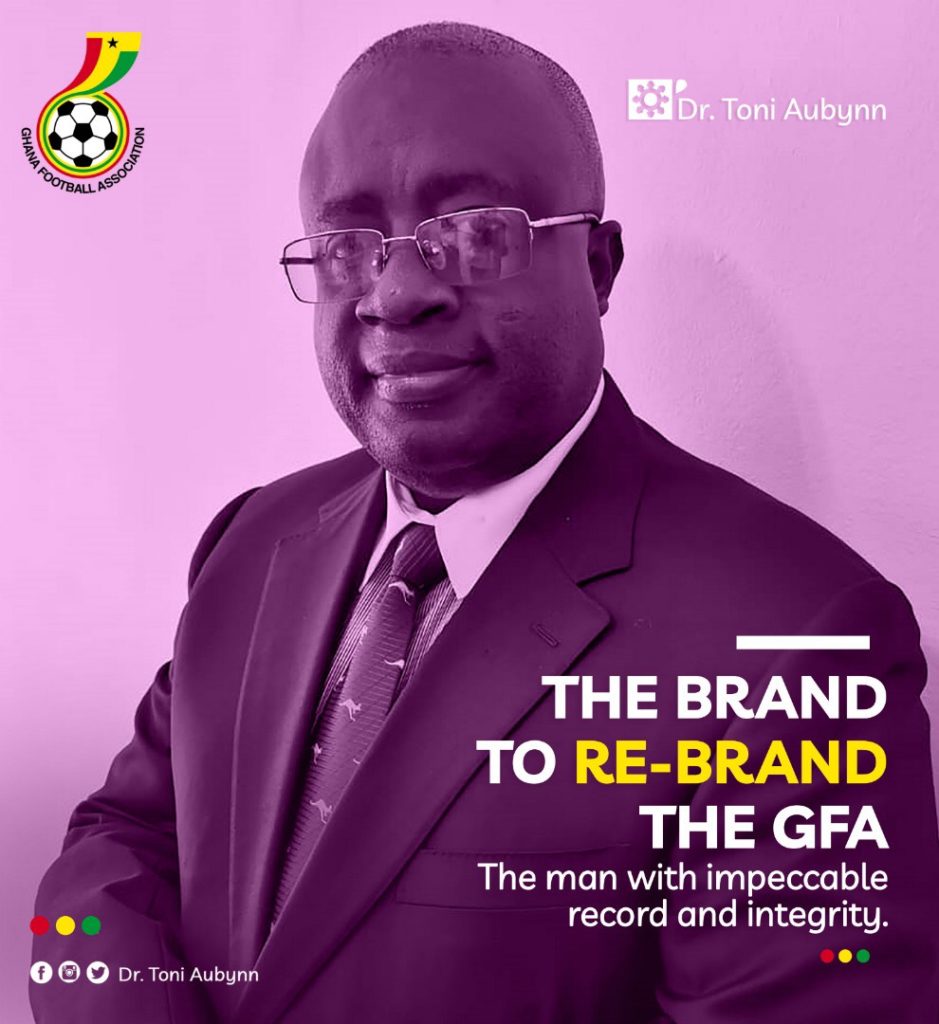 When the house requires cleaning, it needs to be done wholly but when a house needs cleansing, exorcism is the best solution.  In the Ghana Football Association (GFA) Presidential race, Dr. Toni Aubynn is the exorcist who lies in wait for the chance to cleanse the GFA.

The Association is a giant house that dwarfs all sports disciplines in Ghana and the intense scrutiny the body is subjected to, is testament to the amount of influence the organization wields.

Like every grand house that has multiple rooms, the GFA’s departments serve as plush rooms that serve the needs of stakeholders and allied bodies. The GFA’s influence has transcended football and been closely aligned with mainstream politics for better or worse for several years dating back to the Association’s infant years as the Gold Coast Amateur Football Association.

Due to revelations of unholy acts captured by prominent members of the Association headlined by embattled former Association President Kwesi Nyantakyi, the GFA has been covered by a pitch black cloud that is yet to lift.

In the aftermath of Anas’ documentary on corrupt dealings by some members of the GFA, football has suffered gravely as stakeholders feel the pinch of limitations posed by a quasi-unit tasked to run the Association in the interim by FIFA.

Football’s world governing body has tasked the Normalization Committee to steer the affairs until reforms are made. Such reforms including the introduction of an eight year limit on occupancy of the Presidential chair represent a solid attempt to get the GFA cleaned. However, such reforms only represent half of the comprehensive cleaning required; the other half of reforms needed is the election of a new President. The new leader must represent a completion of the GFA’s cleansing and not an individual who represents the opposite.

Electing members from the old guard in plain language is a job half done and like FIFA and CAF, the GFA must avoid the former. Problems bedeviling football in Ghana are so many but fall into two main sects; finance and sound management. Dr. Toni Aubynn excels in both sects and its ancillary areas and is a “fresh face” in the race for GFA’s Presidential seat.

After serving in several roles at behemoth firms such as CEO of Goldfields Ghana and Corporate Affairs Director of Tullow Oil Ghana, Dr. Aubynn has the clout in the corporate world to reel in cash for Ghana’s struggling football circuit.

His present role as Chief Executive Officer of the Ghana Chamber of Mines puts the veteran administrator in a key position to liase corporate organizations with varied backgrounds into the football space.

Sponsorship for football league clubs has been absent for years with the GFA lacking the one true guy to coerce top organizations to meet such needs of the Association. An example of Dr. Aubynn’s leverage of influence in football dates back to the ground breaking $1.5 million a year deal with the Black Stars in 2006 at a time Ghana’s Senior Men’s National Team was anything but attractive.

The injection of significant money into Ghana’s World Cup qualification campaign proved to be the magic wand that wished the country’s World Cup qualification wishes into reality. Such financial incentives have been crucial to the impending construction of a modern 10,000 seating capacity stadium in Tarkwa set to be the largest public-privately owned stadium in Ghana. By playing a major role in funding the stadium construction, Dr. Aubynn has laid the foundation to create an economically viable edifice that should provide several jobs and help the development of other sports disciplines befitting Medeama Sports Club.

Dr. Aubynn serves as Board Chairman for Medeama SC and his vast experience in management roles in Ghana and abroad has translated to the club’s enviable position as arguably the most stable and well run football team in the nation. Consistently finishing in the top six positions in league campaigns, winning the FA Cup in 2013 and 2015 and winning the 2015 Super Cup are accolades achieved by Medeama through the direction of Dr. Aubynn.

It is always darkest before the dawn and Dr. Toni Aubynn is the bright shiny brand to lead Ghana football to the dawn of a great era.