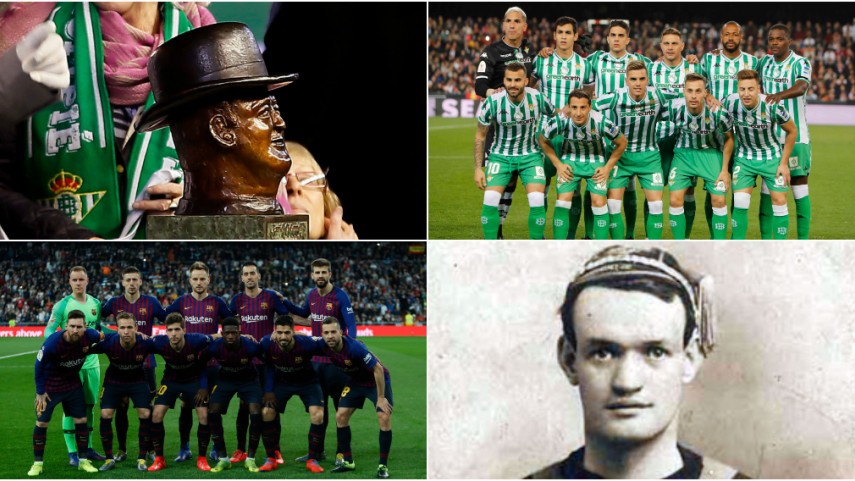 Real Betis and FC Barcelona meet this Sunday evening at the Benito Villamarin in a game which pits together two of the most entertaining sides in LaLiga Santander. No team has managed to beat Barcelona in the league since Betis’ thrilling 4-3 win at the Camp Nou back in November and both remain in end-of-season contention: Barcelona for the league title and Betis for a European spot.

But it’s not only their pleasing on the eye style of football which links these two clubs. The two are connected by the role of one Spanish football’s most important yet unknown figures: Irishman Patrick O’Connell, a man without whom the story and history of both clubs would be very different. With the two sides set to face off on St. Patrick’s Day of all days, there’s no better time to tell his story.

Born in Dublin in 1887, O’Connell played for the likes of Sheffield Wednesday, Hull City and Manchester United in a playing career spanning 17 years, but it was as a manager in Spain that he really made his name. First appointed manager of Racing Santander in 1922, he moved on to Real Oviedo in 1929 before being named coach at Real Betis, then in the second tier, three years later.

It was at Betis where O’Connell began to make history. Known as Don Patricio, he led the side from Seville into the top flight at the first tie of asking and within just a couple of years to the club’s first, and to date only, LaLiga title. O’Connell remains one of the most loved icons in Betis history. His bust, created by British-Irish sculptor Joe Moran, was paraded through the city and presented to a crowd of over 40,000 fans in 2017 while the club has worked closely with the Patrick O’Connell Memorial Fund to restore his grave in London.

His impact on Spanish football didn’t end with Betis, however. After clinching the 1935 LaLiga title, O’Connell took up the coaching reins at FC Barcelona just before Spain plunged into civil war, staying put following the outbreak of war in 1936 despite the club saying they’d understand if he decided to return to Ireland. The conflict put great financial strain on the club, and with bankruptcy looming in 1937 O’Connell led his players on a fundraising tour of Mexico and the United States. The ten games Barcelona played in the Americas raised enough money to save the club from going under, and while O’Connell returned to Ireland in 1940 his place in history was guaranteed. His portrait hangs to this day in the club boardroom at the Camp Nou.

He returned to Spain and Real Betis after the war in 1940, before short stints in charge of city rivals Sevilla FC and former side Racing Santander. O’Connell died in London in 1959.

The legacy of Patrick O’Connell is perhaps one of the most fascinating stories in LaLiga history. Few figures could still draw such affection after so many years at different clubs. And yet he’s remembered as the man who led Betis to the only LaLiga title in their history and the man who saved Barcelona from going under. This weekend’s match between Real Betis and FC Barcelona might even be termed the ‘Patrick O’Connell Derby!’