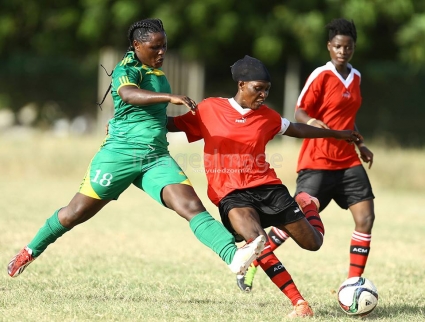 When Kurt Okraku, the new Ghana Football Association (GFA) President walked onto the pitch at McDan park at La to kick the ball to usher in the 2019/20 Women’s Premier League season, there were respectable eyeballs watching.

By the standards of the Women’s game in Ghana, the numbers were unprecedented, the kick-off never seen before, too.

There are those who believe the presence of the first citizen of the country’s football drew the numbers, but week in and out, people turned out in their numbers to watch matches at venues across the country.

Others, who previously had no interest in the game, paid attention via live streams.

With the wealth of talent and quality always undermined, the two months of league football offered an opportunity to change attitudes.

The 7th edition of the Women’s Premier League which appeared to have a well laid down plan to take off drove that message.

It made great strides in the early days. Attendances at games increased game by game, media hype and euphoria grew higher with matches viewed on Facebook reaching an all-time high of 5.8k views per match.

Kurt Okraku and Hillary Boaten, head of the women’s league committee, had just started their journey but had also won many hearts so far.

There was a sense that the now-cancelled football season could be a turning point for women’s football in Ghana.

This was a season that would propel the women’s game into wider consciousness, a season that provides an opportunity to not only build on the foundation but to surpass the achievement and break grounds.

But, the Covid-19 pandemic has left the game in unwarranted position.

If the men’s game has suffered enormously, there will be a deeper and far more reaching consequences for the women’s game.

The Confederation of African Football (CAF), gave us an idea of what is to come. When the continent’s football governing body took a decision to postpone men’s division of their competitions, they cancelled the Women’s AFCON; a testament the bias shown against women’s football over the years.

The GFA has a keen interest in growing the women’s game in the country with a plan of doubling the number of women and girls taking part in football, and improving commercial prospects.

When the Youth Employment Agency (YEA) made available a financial package to support 1000 athletes for the next half a year, the GFA handed it to the girls.

If there’s more, women would have their share of the cake, but at this point, those in charge of football, are grappling with how to recover from the havoc caused by Covid-19.

The havoc that has left the development hanging by a thread. The havoc, that has forced some football teams to be under a self-induced ‘lockdown’.

Since Covid-19 showed its ugly head, some clubs have made little or no efforts to sustain the standards set to improve awareness about the existence of the league.

It was mandatory for all participating teams in the 2019/20 league to have a social media page to keep their fans informed, engaged and entertained.

But, some teams killed that vibe even before football was halted; there were no updates on the club or players daily activities in absence of matches.

With many already not interested, this compounded the significant challenges women’s football faced such as branding and marketing which is key in getting investors on board.

Prior to the pandemic, women’s football was already experiencing some challenges such as poor pitches, lower wages or no wages at all.

It is more saddening that teams rely on the FA for income, and this, clearly indicates the teams are underfunded when compared to men’s football.

Covid-19 has hit businesses’ profits hard, leaving companies who previously had the interest to invest in women’s football unable to. If this causes the pool of sponsors to shrink – a pool that is already small, the future of women’s football will remain under financial threat.

Steps to save the game?

Women’s football has faced tough times since its inception, it is resilient. So, Covid-19 may not be a fatal blow.

Notwithstanding, swift and decisive action is needed to sustain the recent momentum and its growth.

Women’s football should be viewed as a core business and not as a goodwill gesture to the community, hence, taking their branding and marketing game a further level.

One of the elementary factors hampering female football was the players’ attitude.

These footballers are often on short-term contracts and they juggle other jobs and family responsibilities alongside their football careers.

There are also issues surrounding well-being that might be felt more acutely in the sector, but clubs must actively work to supports players.

Clubs should be entrepreneurial and innovative in their approaches to generating revenue, such as fundraising and a huge presence on the internet.

Official club websites and social media activities might just sell them to the world.

There is a sustained demand for women’s football when the game restarts and the teams need to keep high supporters interest to continue advancing a “new age” of women’ football.