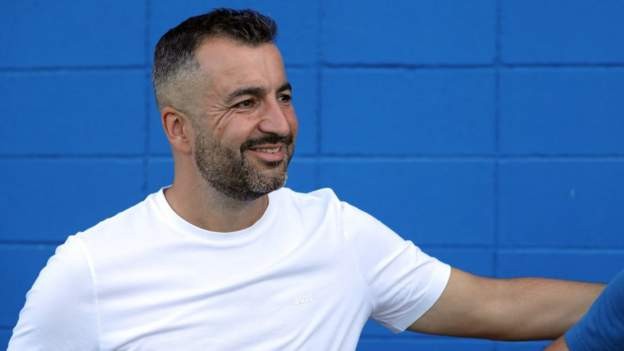 It was a Monday in August, around midnight, and sought-after Spanish coach Diego Martinez was making his way home after watching West Ham dismantle Leicester City 4-1 at London Stadium when he found himself amid a sea of Foxes fans on the platform.

"The station was packed," Martinez tells BBC Sport. "It was like a blue tide. Unfortunately they had lost, and they still had three or four hours until they were going to get home, I thought: 'wow!'"

Martinez was in the process of immersing himself in the English game, embarking on a footballing sabbatical that led from Pep Guardiola and Rafael Benitez to Frank Lampard and Xisco Munoz at Watford, enjoying pit stops at stadiums up and down the country along the way.

A few months before that journey began last summer, he had been in the dugout facing Manchester United as Granada boss, having guided the club from the Spanish second tier into the Europa League for the first time before being knocked out in the quarter-finals at Old Trafford.

The 41-year-old, who will begin his tenure as Espanyol head coach away at Celta Vigo in La Liga on Saturday, says that time out "was like sowing the seed".

"Even though we weren't directly focused on a team it has been a year where we have worked hard," he says. "It has been an experience both on a personal and professional level that has been really enriching.

"We have really learned as much as possible about what we as managers like the most, which is other methodologies, other ways of seeing football, other profiles for footballers, another type of competition too. So an unforgettable time."

Martinez says it was his dream to understand the Premier League, enjoy the culture of English football and experience "what the life is all about, how people think, what the fans like".

He is grateful to all those who helped him embrace the opportunity, from Manchester City boss Guardiola and former assistant Juanma Lillo, to Biggleswade United chairman (and BBC Spanish football expert) Guillem Balague and coach Cristian Colas in England's ninth tier, where Martinez learned some footballing language that won't beat the watershed.

On meeting Guardiola, Martinez adds: "It was just natural - I would give him 20 out of 10. The same with Rafa Benitez. When two managers get together, they talk about all these different things, they talk for ages, and I think that happens with everyone, with Rafa Benitez, with Xisco.

"You talk about tactics, the techniques, team management and life. How the personal life can have an effect on the context you are currently in."

Martinez played youth team football with Celta and Cadiz but turned his hand to coaching aged 20, studying for a degree and working his way through the lower leagues, before roles at Sevilla were followed by the top job at Osasuna and then an impressive three-year reign at Granada.

The Spaniard's stock was on the rise when he left for what was a footballing mission but also "an essential family adventure", with Martinez's wife and young daughter joining him in England.

"I believe a lot [in] how I feel," he says. "I feel I am very privileged because up until this moment in time the steps I have made I have done because I was totally convinced and really felt that was what I needed to do, because that fitted in with me, with my team.

"We are a technical team that before we make a step forward we prepare every step in great detail - almost like you do before a match - but also there is something about ambition and how you feel.

"I have always done well by working like this, because what you aspire to be is happy as a manager and to get a good team and work with other people and share ideas and feelings.

"We have been training very hard for the whole year to be the best prepared as possible for this opportunity we thought would come along, and that is what happened."

Martinez finished seventh and ninth during his two previous La Liga campaigns, when he was Granada boss

Espanyol finished 14th on their return to La Liga last season, parting ways with boss Vicente Moreno in May, and when presented with the opportunity to take charge Martinez felt it was a project that "fitted like a glove".

"Fortunately, we have had options throughout last year to be able to coach several clubs and I am very grateful for their interest, to be able to share time with them and experiences and learnings," he says.

"To do that, we really needed a project like this, which has got a very unique feeling - very special and intense, a club with lots of history that really wants to progress and grow."

The latest step in the adventure is another exciting one, working in Barcelona - a city Martinez calls "avant-garde" and a "true privilege" to live in - meeting the club's "diehard Pericos" fans and getting to know players and staff between double pre-season training sessions.

"The style, at least how I understand it, is to get the best performance out of the players' profiles," Martinez says when asked what to expect from his side this season.

"We want to see an Espanyol that connects to its fans, that is able to put on pressure, we want it to be intense, and when we have the ball in our possession we want to be able to get up to the goal with a good rhythm and good players.

"We want to be a little bit more vertical and have a team that gets people excited - that is very important. Always with the personality of trying to provoke things.

"What is important is to get the best performance out of everyone and to be a team that is recognisable and contagious and it really encourages our fans.

"Our intention isn't just to build something for one season. We want to go beyond that."