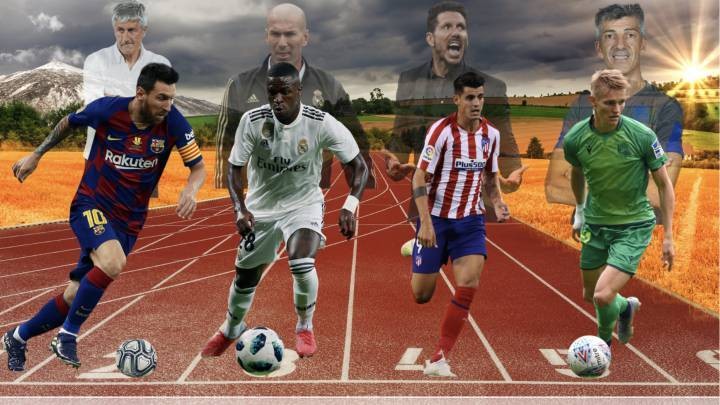 Top-flight football in Spain restarts on 11 June after the Covid-19 suspension. There will be matches every day. Real Madrid open against Eibar, Barcelona vs Mallorca.

Spanish football is back. Spain's National Sports Council confirmed today, Friday, that LaLiga would restart after its suspension for the coronavirus pandemic. The first game back will be Betis vs Sevilla on 11 June.

From there to 19 July LaLiga won't stop, with 39 straight days of football in Spain's top flight to complete the 11 remaining matchdays of the 2019/2020 season. In total there are 110 games to be played, and all in the sweltering heat of the Spanish summer, with mid-day temperatures already well over 30 in much of the country.

While Liga boss Javier Tebas has not officially confirmed the calendar, everything points to there being games every single day once tournament restarts in order to fit in the matches.

The possible kick-off times for the matches have not been released yet, although it appears clear they will not be the start times that LaLiga used prior to the Covid-19 suspension. Given the high temperatures it is likely that most kick-off times will be 19:30 or later, with the exceptions being home games for the teams on the north coast, such as Celta, Athletic Club and Real Sociedad.

Not all the clubs are accustomed to the rhythm of playing twice a week almost every week. One helpful change has been the move to allow five substitutions per match. For some of the key players in LaLiga, they could be looking at trying to play 990 minutes of top-flight football in less than a month and a half. More than a quarter of the championship in just a few weeks. What's more, this frenzy of football is taking place after a two month break with players far from match fitness. German football saw a flurry of injuries when it restarted.

With 11 matchdays left there is everything to play for at top and bottom of the table. Barcelona and Real Madrid are fighting for the title, with Setién's side on 58 points versus Zidane's 56. Real Madrid hold the head-to-head advantage if they finish tied (0-0 and 2-0 in their games this season).

The battle for the Champions League spots is also fascinating: Sevilla, Real Sociedad, Getafe, Atlético and maybe Valencia tussling over two places. Meanwhile the Europa League spots will likely go to that group, with Villarreal, Granada and Athletic Club eyeing up the chance of stealing a march on their rivals in the final stage.

At the bottom of the table, Espanyol have their work cut out to save their place in the top flight, as do Leganés and Mallorca, although they are both just a win from jumping out of the relegation zone. Celta sit just above the red line, with Eibar and Valladolid also at risk of slipping into danger.

Alavés, Levante and Betis have more margin of error, but need to cautious.