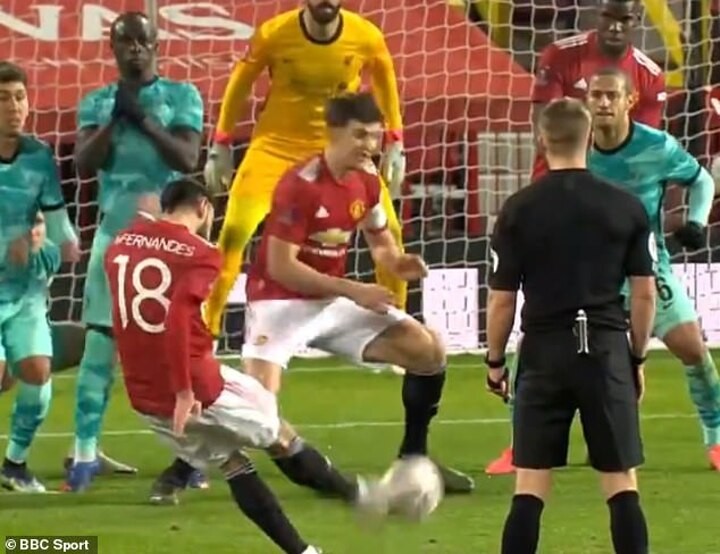 Liverpool midfielder Thiago Alcantara was accused of ducking out of the way as Bruno Fernandes scored the winner for Manchester United at Old Trafford on Sunday.

With the sides level at 2-2, Fernandes scored an impressive free-kick in the 78th minute which ultimately proved decisive.

Some observers questioned whether Thiago could have prevented the free-kick from going in by jumping instead of ducking.

Thiago appeared to duck, with United midfielder Paul Pogba, who was standing behind him, also getting out of the way.

One Twitter user wrote: 'I do wonder what would have happened if Thiago decided to jump there instead of duck.'

Another wrote: 'Did Thiago duck under that?'.

Meanwhile, another individual seemed adamant that the goal wouldn't have gone in if Thiago hadn't have ducked.

They wrote: 'He wouldnt have scored if Thiago didnt duck under the ball and he let that goal in Thiago had he not ducked it would have hit him on the head and probably wouldn't have gone in.'

They wrote: 'Thoughts as a coach or player? Is this goal avoidable if Thiago is willing to take one in the face? Watched it back several times and can’t get away from the fact he ducks then immediately pops back up ones it’s whizzed past.'

Another person described Thiago's actions as 'pathetic'. They wrote: 'Thiago ducks underneath it. Pathetic.'

The defeat to United saw Liverpool's concerning form continue, with the result following on from the shock Premier League loss to Burnley.

Jurgen Klopp will be determined for his side to bounce back when they face Tottenham away on Thursday.