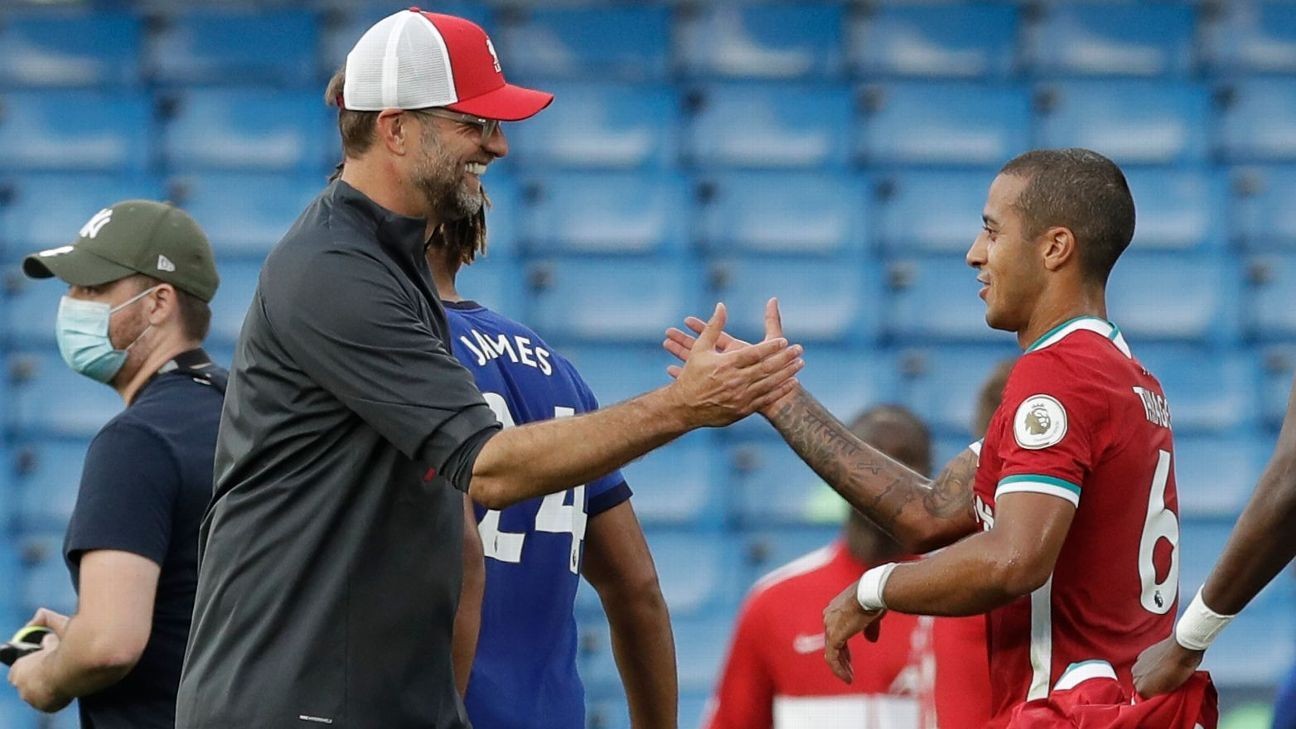 LONDON -- It took Liverpool almost three months of pondering and prevarication before they suddenly snapped into action and completed the £20m signing of Thiago Alcantara from Bayern Munich last Thursday. Within five minutes of his debut against Chelsea on Sunday, you had to wonder why Liverpool spent so long making up their mind about the former Barcelona midfielder.

It's true that we shouldn't get too carried away by a 2-0 win and Thiago's 45-minute cameo against a Chelsea team reduced to 10 men following the first-half sending-off of defender Andreas Christensen for a crazy rugby tackle on Sadio Mane. This was the Chelsea that gives manager Frank Lampard nightmares -- the Chelsea of individual mistakes and bad decisions that gift points to the opposition -- but for all of the mitigating factors that should tone down the praise of Thiago, there can be no escaping the fact that the 29-year-old has already given Liverpool something new and different.

Entering as a half-time replacement for captain Jordan Henderson, who had complained of a tight thigh during the interval, Thiago strutted around the Stamford Bridge pitch as if he owned it, dictating play as though he had been playing in the Premier League for 10 years.

"We decided to bring Thiago on early because it was 11 vs. 10 and a player like him can command the rhythm," manager Jurgen Klopp said. "It was the perfect start for him and the boys helped him massively."

But while Thiago looked good and made an instant impact with his passing and awareness, he also instantly changed the way Liverpool played. It was as though Klopp had flicked a switch the moment he sent Thiago onto the pitch.

Having been a team that has enjoyed European and domestic success by catching opponents out with a ball over the top for the likes of Mohamed Salah, Roberto Firmino and Mane to chase, Thiago's entrance suddenly made Liverpool a possession-based side capable of doing to opponents what Manchester City have done under Pep Guardiola. With Thiago at the hub of midfield, everything seemed to go through the Spaniard. He patrolled the middle third of the pitch, demanded the ball from his new teammates (at times telling them where to run) and then moved it on straightaway with a first-time pass to a red shirt in space.

Thiago made 75 completed passes during his 45 minutes of action -- more than any Chelsea player over the 90 minutes, and the most of any player in 45 minutes since the Premier League began compiling such data in 2003-04.

Liverpool's first goal was an example of the change Thiago's presence made to their attacking approach. A slick passing move in the final third, which involved Thiago as a focal point, ended with Mane heading home from close range after Firmino had played a sharp one-two with Salah. It was a typical City goal rather than one you'd usually associate with Liverpool, but Klopp's team needed to evolve their approach this season and, just five minutes after their new signing had entered the fray, Plan B was there for all to see.

Plan B suggests it's only a back-up to Plan A, and that may turn out to be the case, but once Thiago secures a starting spot -- and it won't take long -- it is impossible to envisage Liverpool not using him as their creative force.

It won't sit easy with Manchester United supporters, who had quickly allowed themselves to get excited by the prospect of their club beating Liverpool to the signing of Thiago, but the new Liverpool No.6 plays the game like Paul Scholes used to at Old Trafford. Scholes always seemed to have more time and space on the ball than anyone around him. He could also pick a pass and score great goals too, and that's precisely what Thiago brings to Klopp's side.

At 29, he is approaching the stage of his career when many begin to write players off, but the way he plays, with his brain first and legs second, means he could easily play deep into his 30s, just like Scholes did at United. It's hardly surprising that Sir Alex Ferguson had set up a £17m deal for Thiago to replace Scholes in 2013, only for his successor, David Moyes, to pull the plug on the proposed transfer from Barcelona.

play1:13Odgen: Kepa now a 'lost cause' for Chelsea

Scholes had a flaw when it came to tackling and, having conceded a penalty following a clumsy trip on Timo Werner, Thiago looked like he was taking another leaf out of the former United player's book. Reds keeper Alisson got his new teammate off the hook, though, by saving Jorginho's spot-kick moments later -- another pointer towards everything working well for the Liverpool machine right now, especially when compared to Chelsea.

Christensen's foul on Mane, which ended with a red card after a VAR review of referee Paul Tierney's initial yellow, was an example of Chelsea lacking quality at the back. And when goalkeeper Kepa Arrizabalaga scuffed a clearance straight to Mane for Liverpool's second goal, you can imagine Lampard pleading with his club to accelerate the deal for Rennes No.1 Edouard Mendy as a matter of urgency.

"A big mistake," Lampard said, with clear frustration, when asked about Kepa's latest costly error. "It's a clear mistake and it has cost us."

Kepa and Christensen were problems for Chelsea last season and neither has been sufficiently replaced. Thiago Silva will add experience when he is fit to play, but Chelsea really needed a young, commanding centre-half this summer. Instead, they have loaded their squad with attacking talent with Werner, Kai Havertz and Hakim Ziyech, but all the attacking quality in the world is little use if you can't keep the ball out of the net.

That's not a problem for Liverpool. A problem for them is how to keep Thiago out of the team, but it's hardly a bad dilemma for Klopp to wrestle with.