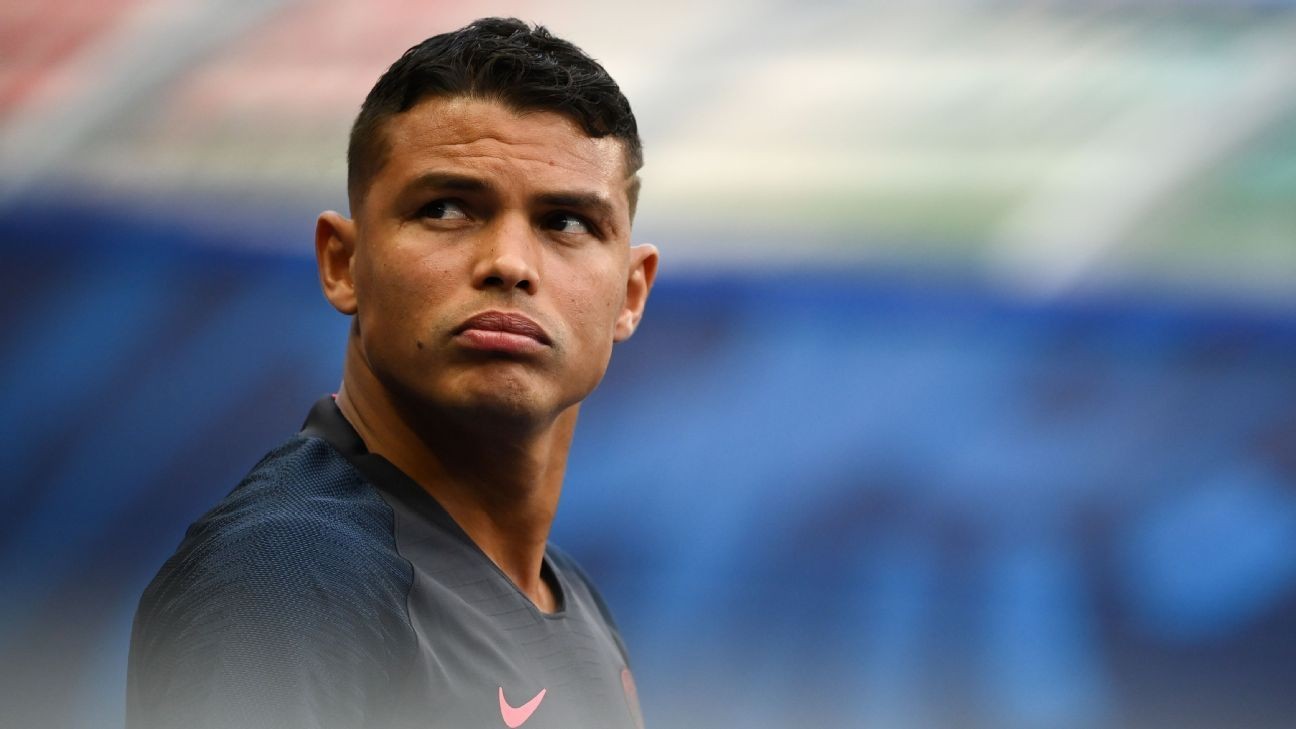 The dreaded call finally came at the end of May. For weeks, and with Ligue 1 shut down, Thiago Silva had hoped that Leonardo and Nasser Al Khelaifi -- PSG's sporting director and president, respectively -- would change their minds and offer him a new deal. The Brazilian defender and eight-year PSG player wanted his love story with Paris to continue. Even at 35, he felt that he could still offer a lot to the team and to the club, but the bosses clearly saw it differently.

At his age and with his wages (11m euros net per year year), they considered keeping Silva to be unnecessary. The irony is that, as they let Silva go, they pushed hard (and failed) to convince the club's latest young talent, 18-year-old Tanguy Kouassi, to sign his first professional contract at the club and eventually replace him in PSG's starting XI. (On July 1, Kouassi joined Bayern Munich instead.)

And yet, "O Monstro" ("the Monster," his nickname since his Milan years) still has plenty to play for ahead of his eventual exit. He returned to Paris as planned for training in mid-June, and won two more trophies (in addition to the truncated Ligue 1 title) as PSG beat Lyon and Saint-Etienne in the two domestic cup finals, completing the Treble. Next comes the Champions League, and a date with Atalanta on Wednesday. The Parisians are in the quarterfinals, and Silva's dream of winning the biggest European competition is still alive.

Pulisic's first year at Chelsea: The U.S. star's highs and lows since dream moveChampions League 2020-21 kicks off! Wait, what?Juventus hope Pirlo can be a 'Ronaldo Whisperer' after Sarri mess

But once August is gone, it will be the end of an era. There will be tears shed, plenty of smiles after eight great seasons, lots of wonderful trophies -- 23 in all! -- and plenty of memories. There will be some regrets, too. Like not doing better in Europe, for one, especially with all those Champions League heartbreaks, not least the one PSG suffered at the Camp Nou in 2017.

Thiago Silva gave his all to PSG, and this was, is and will always be very much his club.

Silva arrived in the summer of 2012, a year after the Qataris took over, for 42m euros from AC Milan with the tag of being the best defender in the world. He became PSG's best messenger, showing great love towards the club and the fans, leadership and humanity as well as talent. PSG as a European force had to be built, and he would be the biggest pillar, serving as either captain or vice-captain pretty much since his arrival.

He played 312 games in all competitions, winning seven league titles, four French Cups and five League Cups. He lost his place in the Brazil squad in the aftermath of the terrible 2014 World Cup (though he didn't play in the 7-1 humiliation to Germany) and again after their exit at the 2015 Copa America, where his handball against Paraguay (and the penalty that followed) cost Brazil dearly. To his credit, Silva rallied, regaining his place and triumphing again with the Selecao at the 2019 Copa America. All the while, he found the energy and the force for his redemption in the love that Paris has always given him.

Silva's eight-year run as a core PSG player is coming to an end this summer. But it could end on a brilliant note if PSG manage to win the Champions League. FRANCK FIFE/AFP via Getty Images

Of course, the Champions League has eluded him so far, though this season could be his and PSG's best chance. His manager in 2017 after the loss at Barcelona, Unai Emery, blamed Silva for the Barcelona debacle accusing him of not having respected the game plan. Silva had, at times, shown a tendency of playing too deep in the big European games, maybe not feeling comfortable with a high line or with his own limited pace. Yet none of it should not overshadowed how fantastic he has been for PSG. He made the Ligue 1 Team of the Year in each of his eight seasons in France, except the current one as there were no awards handed out.

For a club with such a Brazilian legacy on and off the pitch and so much input, influence and inspiration from Silva and his peers, the fact that the towering defender became one of PSG's biggest ambassadors on the other side of the Atlantic is an amazing achievement. It is credit to his dedication, his longevity and his performances. Even if at the beginning he didn't want to leave Milan, he made Paris and the Parc des Princes his home.

It was inevitable that PSG would eventually turn the page on Thiago Silva. It happened in strange circumstances, amid the coronavirus shutdown, and a very special context in having no fans in the stands. He will probably not be able to say a proper goodbye in front of a full stadium. The fans will not have a chance to thank him directly, either.

Beyond that, the debate as to whether or not he is the best defender the Parisians have ever had is justified. The answer is surely yes. Their paths might cross again if Thiago Silva continues his career in Europe and one day faces PSG, and that could be the perfect occasion to pay him a fitting tribute. Regardless, the PSG No. 2 shirt will be very heavy to wear for whoever follows in his footsteps.