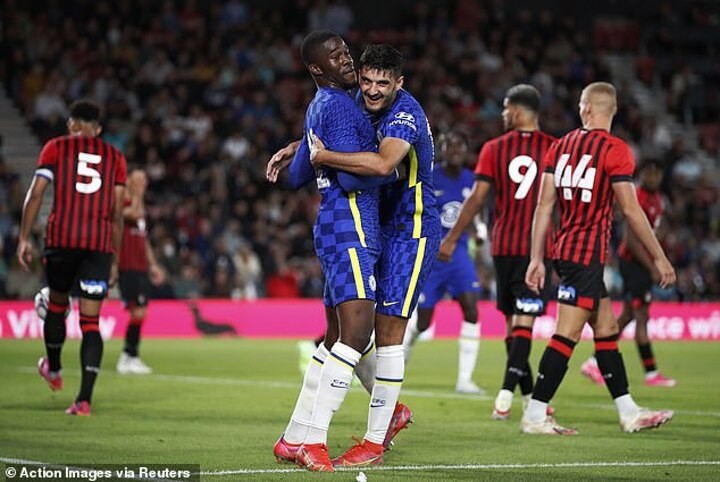 Chelsea continued their preparations for the new season with a 2-1 victory over Championship side Bournemouth on Tuesday night.

With nothing to separate the two teams in the first half, Emiliano Marcondes opened the scoring for Scott Parker's side with a fine close-range finish.

Here, Sportsmail picks out six things we learned from the game at the Vitality Stadium.

One of the most notable changes Thomas Tuchel made when he replaced Frank Lampard as manager was to ditch the back four and play wing backs on either side of three central defenders.

It immediately helped the Blues tighten things up at the back but also got the best out of N'Golo Kante and Jorginho in midfield. The move also freed up Mason Mount to play in one of those two positions behind the lone striker.

Playing as wing-backs also got the best out of Ben Chilwell and Reece James going forward, while it also injected Marcos Alonso with new life after he had been cast aside by Lampard.

Based on Tuesday night's evidence, Tuchel looks likely to stick to the system that delivered Champions League glory and a top-four finish in the opening few weeks of the season.

The Blues opened talks with Sevilla for a move for Jules Kounde earlier in the day and he looks ideal to play in the right centre back role, which Cesar Azpilicueta played in towards the end of last season.

If Callum Hudson-Odoi is to convince Tuchel that he belongs not at wing-back, but rather further forwards, then he needs to prove himself to be clinical in the final third.

It was just after the 15-minute mark when the youngster had a great chance to open the scoring. Chelsea were able to break and Hakim Ziyech picked out the youngster on the right-hand side.

Admittedly it was a poor pass and forced Hudson-Odoi to slow before he could run at the Bournemouth defence but, after managing to work a yard of space, his effort was poor and straight at the goalkeeper.

He showed exactly what he can do 10 minutes later, though. Picked out by a superb switch of play, Hudson-Odoi stood his defender up before driving to the byline and crossing for Tammy Abraham, who really should have scored.

Drinkwater can do a job

Danny Drinkwater has not played competitively for Chelsea in three years and his chances of regular first-team football remain close to zero with Jorginho, Kante, Mateo Kovacic and Mason Mount at the club.

But, nonetheless, he gave a performance similar to those we became accustomed to seeing during his title-winning season with Leicester. He is desperately trying to win the support of Tuchel and did his chances no harm.

The 31-year-old started in the midfield pairing alongside Conor Gallagher. Be under no illusion, there were no breathtaking moments of skill or lung-busting runs but Drinkwater did exactly what was expected of him.

Drinkwater won the ball back when he needed to, took it from the defenders when they tried to play out and was always willing to hand it off to those ahead of him or on the flanks.

He spent the second half of the 2020-21 season on loan at Kasimpasa in Turkey but, if he can continue this form over the next few weeks, there is no reason why he can't win a Premier League move or stick around at Stamford Bridge as a fringe player.

Big things were expected of the Moroccan after he joined from Ajax last summer but a knee injury prevented him from hitting the ground running and then a hip problem saw him miss most of the festive period.

In total, Ziyech scored six goals and provided four assists in 39 appearances but was largely left out of the big games towards the end of the season under Tuchel.

The former Ajax man played just 29 minutes in the Champions League from the quarter-finals onwards and didn't play 90 minutes in the Premier League under the German manager.

We saw both sides of his game on Tuesday night, coming into the game on the back of a hat-trick against Peterborough earlier this month.

There were the deft touches and pinpoint switches of play we are used to seeing but he also rushed his final ball on more than one occasion and kicked it in frustration when one decision didn't go his way.

Ziyech has been linked with a move to AC Milan this summer with so much competition for those two positions behind the striker. But he looks fit and sharp and will be an asset if he can stay fit.

Chelsea may have had more of the household names in their team but the best player of the night was undoubtedly David Brooks on the Bournemouth winger.

The 24-year-old burst onto the scene with seven goals and five assists in his debut Premier League campaign in 2018-19 and was attracting interest from the likes of Liverpool and Manchester United.

But he then saw his momentum halted by a bad ankle injury that saw him make just nine appearances the following campaign as the Cherries were relegated to the Championship.

He played 39 times, scoring six goals and providing seven assists, as Bournemouth lost in the play-off semi-finals and has not really been linked with a move, a sign of how much his stock has dropped.

But here he was outstanding. In the first half he played a delicious through ball for Dominic Solanke to run on to before playing Jack Stacey in down the flank to cross for Emiliano Marcondes to score the opening goal.

It will not be long before we see him in the Premier League again.

Broja could be a future No 9

Chelsea are in the market for a striker this summer, that is no secret.

But it looks like they have a very promising option for the future in the shape of Armando Broja.

The Albanian teenage striker was born and raised in Slough, 1600 miles from Tirana, and has been a Chelsea player since he was 10-years-old, spending last season on loan with Vitesse Arnhem.

He came on at half-time on Tuesday night and instantly looked more lively and dangerous than Tammy Abraham, who missed a number of chances in the first half.

Broja then showed his instinct for goals with a smart piece of control inside the box and tidy finish to make it 1-1.

He looked quick, strong, good with the ball at his feet and willing to put himself about.

So, while Tuchel may be looking at huge fees for a ready-made No 9 this summer, he can look forward to having Broja in his ranks for years to come.