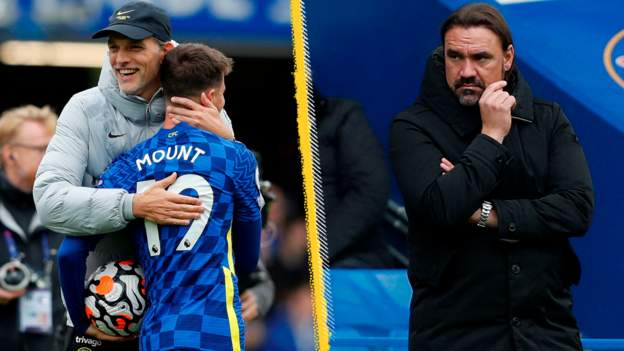 Former Chelsea striker Chris Sutton says the Blues' 7-0 thrashing of Norwich proves why they will go on to win the Premier League - but were they given a helping hand by a woeful Canaries side who already look destined for relegation?

Mason Mount scored a hat-trick as Thomas Tuchel's side ran riot at Stamford Bridge, with further strikes from Callum Hudson-Odoi, Reece James, Ben Chilwell and Max Aarons' own goal wrapping up the win.

The performance was all the more impressive given it was without the injured Romelu Lukaku and Timo Werner, while five of the seven goals were scored by Blues academy graduates.

It means the London club are certain to end the weekend top of the table, while Norwich remain rooted to the bottom and without a win this season.

"This is why I believe Chelsea will win the Premier League - their squad is so strong and their academy players are flourishing," Sutton told BT Sport.

"Today's performance was excellent, but last month the performances have not been there. That is a tremendous mentality to have. They have a squad ready to compete at all levels."

'Mount one of the most outstanding players in the country'Mason Mount is the 20th different player to score a Premier League hat-trick for Chelsea, with only Arsenal (21) having more different hat-trick scorers in the competition.

Mount had not scored since Chelsea's Champions League semi-final second-leg win against Real Madrid in May, but his return to goalscoring form was timely for Chelsea after Lukaku and Werner picked up injuries in the midweek win over Malmo.

"Mount is becoming one of the most outstanding players in the country," former Chelsea midfielder Joe Cole told BT Sport. "Some fans don't like him but I want to sit them down in front of a touchscreen. What he does is unbelievable. It must be a tribal thing. I am yet to meet a player or coach who doesn't think he is outstanding."

Mount also turned provider to set up fellow academy graduate James to make it 3-0 and effectively end the game as a contest shortly before half-time.

"It's a special day, not just for me but because of the scoreline and the way we played," Mount told BBC Match of the Day.

Blues boss Tuchel said Mount's hat-trick was a "massive moment" for the 22-year-old, though he played down his side's title prospects.

"I felt him a bit lighter, plays with a bit more freedom in the last matches. This is what we need," said Tuchel.

"You don't find any manager in the world who gives you a statement on favourites for the title race in October. We are where we are and we know what we want to do."

'I don't think they are playing for the manager'Teemu Pukki has scored twice in the Premier League this season, the only goals Norwich have scored in the competition

As good as Chelsea's performance was, they were helped by a ragged Norwich side who have lost seven out of their nine games this season.

They have scored just two goals in that time, only the third side in Premier League history to have scored so few goals at this stage of the season.

The Canaries gave Chelsea far too much time on the ball and the Blues ruthlessly took advantage, with the London club unlikely to have a more comfortable afternoon this season.

Norwich's day was summed up by the sight of manager Daniel Farke with his hands outstretched on the touchline in utter bemusement at his side's defending after Chilwell scored Chelsea's fourth.

They are now without a Premier League win in 19 games, stretching back into their previous top-flight season in 2019-20.

Norwich stayed loyal to Farke at the end of that campaign and were rewarded when the German guided them back up at the first attempt, but with an immediate return to the Championship already looking likely, is it time for a change?

"I look at the players and I don't think they are playing for the manager," said Cole. "Look at the mistake Gibson made - that is a lack of professionalism. I personally think it needs a fresh voice in the dressing room. There was no fight or passion from the players."

Former Canaries striker Sutton added: "Losing 7-0 puts so much pressure on Norwich. People will be asking questions whether the players are listening to the manager. Is he the right person to take them on?"

Farke acknowledged his side's poor performance but said it "is not the right moment" to talk about relegation.

"It's an unbelievably tough day. In all areas we were not good enough for this level," he told BBC Match of the Day.

"At this level you always have pressure, but I'm just focusing on how I can help the team. It was clear before the game that it would be a tough task. At home to Leeds [next week] - these are the type of games where we need to pick up points."