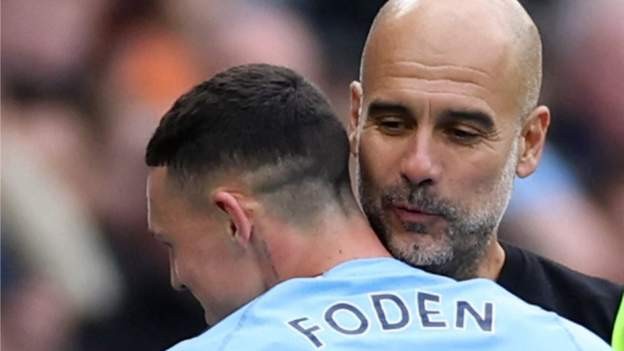 Manchester City were so good in the first half of Sunday's Manchester derby, it was probably Pep Guardiola's idea of perfect football.

One of the things that makes the City boss so brilliant is that he never seems content. No matter how well his team plays, he always wants more from them.

But I was watching that first 45 minutes against Manchester United, with City 4-0 up, and thinking that this was an insight into what Pep is asking from his players on a daily basis.

In terms of a game where the vision he has in his mind is actually delivered on the pitch, I bet it was as close to perfection as he has got since he took charge at City in 2016.

City have put in plenty of incredible performances under Pep before, but Sunday still stood out.

In such a big moment - like any game against United always is - each goal they scored in open play was almost like a work of art.

I see lots of goals and think "that was brilliant" but the detail and clinical nature of, say, Erling Haaland's sliding far-post finish to make it 3-0, or the way Phil Foden got on the end of Haaland's cross to score a fourth, was brilliant to watch.

Each time, the margin of error of the final ball was tiny but, each time, they were absolutely inch-perfect.

City have a way of playing that I think is the best football we have ever seen in the Premier League, so it is fitting to see them score such elite-level goals.

But, even for Pep, it must have been a special moment. He always knows what he wants his team to do, but here he saw it manifested on the pitch.

'Scary' Haaland is 'all the best strikers in one'Manchester United 'lacked belief' says Erik ten HagMcNulty: United rivals to City? Not a chance - this was humiliation

Grealish is looking dangerous againUnited defender Diogo Dalot was booked for bringing Grealish down in the second minute, after he had skipped past him. Grealish made three successful dribbles against United, the joint-most of any City player, and was involved in nine duels, winning seven of them

United had no way of stopping Haaland at Etihad Stadium, but Jack Grealish and Foden also gave them a very difficult time on either flank.

While Foden got a superb hat-trick, Grealish did not manage a goal or an assist and you could tell he was disappointed when he came off after 75 minutes, even though he had played really well.

When you think of the big moments in previous Manchester derbies, you only see the goals - like Wayne Rooney's winner for United with an overhead kick in 2011, or David Silva's volleyed pass to set up City's sixth goal later that year.

Grealish wanted to be a part of that, so I actually liked seeing him so frustrated. The most important thing, however, is that his all-round play looks dangerous again.

I think Jack has had to accept that last season he was not at anywhere near the level that got him a move to City.

Yes, he had to adjust to playing under Pep, not being picked every week and not being the main man like he was at Aston Villa, but he also needed to elevate his game.

He went from being this flamboyant and fearless creative force, who would go past players and make things happen, to just being a guy who cut inside and passed the ball off.

In his past few games for City, though, Grealish has been a different player. Sunday was the same.

He is back in the type of form we saw at Villa, which is where I want to see him as we head into a World Cup.

At his best, he should be starting for England in Qatar - and hopefully that's where he is heading with displays like this.

City have flexibility, fluidity... and desire

City have many strengths, and one of them is their flexibility. It doesn't seem to matter who they are missing from their team - it doesn't make any difference.

When Sunday's sides were announced and Rodri was absent, it was seen as an opportunity for United. As a midfielder myself, my immediate thoughts would have been quite similar.

Bernardo Silva and Ilkay Gundogan were at the base of the City midfield instead and I would have been thinking I might be able to get about them a bit here - they are both excellent footballers but they don't have the same steel as Rodri does to win headers and tackles.

United might have had the same idea, but they could not get anywhere near them. City's midfield completely outplayed them.

That is testament to the genius that is Pep, and also shows the brains in the City team, in and out of possession. Silva and Gundogan knew when to press and when to drop, as well as when to dribble and when to pass.

They are just so fluid, and the mixture they have when Kevin de Bruyne drops in makes them too smart for anyone to deal with.

Their desire never dropped either, no matter what the score was.

Often the focus is on how good City are going forward, with the goals Haaland scores and the way they take teams apart.

But without the ball, they also all work harder than anyone else and that was apparent again on Sunday. In comparison, United were just pathetic.

City hunted in packs, while the United players kind of tiptoed towards people, almost asking each other "shall we press them or not?"

It was a half-press, and it just didn't work. I've played against teams who have done the same and you can sense it. You know the opposition are not really trying to get the ball.

Whereas when City come after you, it is panic stations and you have to get rid of the ball before they take it off you.

That is yet another reason they are so horrible to play against, on a very long list.