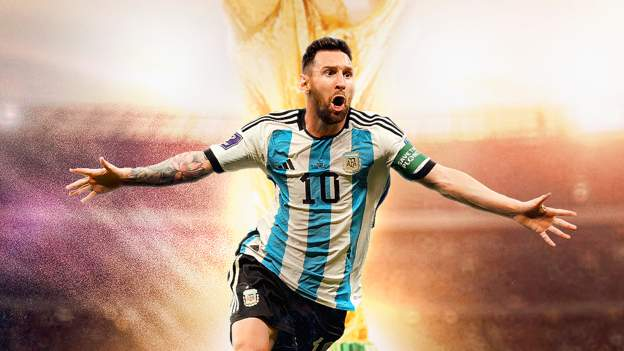 Argentina's World Cup graph continues on an upward curve as Lionel Messi's involvement in Qatar continues into the last 16 - but the story of a routine win barely touches the sides of the drama that unfolded at Stadium 974.

The basic facts state Argentina's 2-0 win over Poland completed another stage of their rehabilitation from the shock of that opening loss to Saudi Arabia.

They now face Australia, while the Poles join them in the knockout stage on goal difference.

This was the night the real Argentina stood up, the fluid and competitive force that went 36 games unbeaten before the rug was pulled out from under them by Saudi Arabia, playing at full force to outclass Poland.

More of that later - because the closing stages here contained tension and drama that the match itself never gave us because Argentina were so vastly superior.

Mexico despair but Poland joy on 'crazy day of football'Fifa World Cup: Groups and scheduleReaction to a dramatic night

Argentina were 2-0 up and Poland were through on the flimsy basis they had fewer yellow cards than Mexico, five to seven, but knowing another goal conceded, or another for the Mexicans at Lusail Stadium, would send them out.

In the end, Saudi Arabia put Poland's qualification beyond doubt with a goal of their own, the catalyst for wild Polish celebrations on the pitch and in the stands. complete with waving of red and white flags, as news filtered through they would play France.

In the background, Argentina took the acclaim from their magnificent supporters, who flooded Stadium 974 in their thousands and made it look and sound more like River Plate Stadium rather than this unique arena made from shipping containers.

Argentina were in everyone's conversation when potential World Cup winners were discussed but had slipped up badly against Saudi Arabia then needed a moment of Messi magic to kick them into gear when they won 2-0 against Mexico.

Here, they played at a higher tempo and intensity, with Messi dazzling with those mazy dribbles, even hearing his name chanted when he had a first-half penalty brilliantly saved by Wojciech Szczesny.

In reality, justice was done as it was an awful award after VAR, the result of a routine aerial challenge between Messi and Szczesny.

This was Messi's 22nd World Cup appearance, overtaking the great Diego Maradona with the most outright appearance for Argentina in this tournament.

Messi could not celebrate the landmark with a goal but it would have left a sour taste had he done so with that penalty given the highly dubious nature of the award, when VAR should have confirmed it was not a penalty rather having Dutch referee Danny Makkelie pointing to the spot.

The only surprise was the breakthrough took 46 minutes before Brighton's Alexis Mac Allister broke the deadlock, Manchester City striker Julian Alvarez completing the formalities with a fine second.

Argentina's passing game was consummate, the sort Messi relishes, as they completed 800 in total and had a completion rate of 92%, both of which were the highest on record in a World Cup game since 1966.

They combined the more subtle aspects of the game with a fierce trademark competitive edge, tearing into blockbusting tackles, harassing Poland until they coughed up possession, every player willing to do the defensive dirty work to regain possession.

In other words, this was the night the real Argentina stood up at this World Cup.

Argentina have now joined Brazil, England, France and Spain in showcasing what they are capable of producing and the sheer force of this win, and the determination to secure it from the first whistle, will have delighted coach Lionel Scaloni.

This looked like the team they were talking about before the showpiece started in Qatar, with the mercurial Messi leading the younger generation.

It was exemplified by the clever piece of skill produced by 21-year-old Enzo Fernadez of Benfica to set up Alvarez, only 22, to fire a finish high past Szczesny into the top corner to show why he is so highly regarded by Manchester City manager Pep Guardiola.

Thousands of Argentina fans claimed territory behind each goal at Stadium 974 after the final whistle and went through their full songbook in deafening fashion in a celebration of what they had just seen and what they might still see from their team in Qatar.

Their country's colours swirled above their heads in the form of shirts and scarves in a joyous outpouring.

The belief is growing among Argentina's players and supporters that they might yet fulfil all those optimistic pre-World Cup predictions - and Messi may yet get his hands on the crown that has so far eluded him.