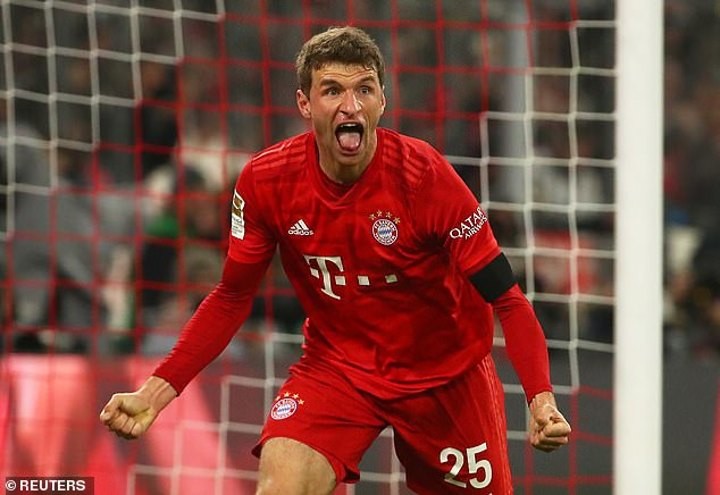 Some things never change, even when the whole world is in lockdown. On Tuesday, for example, Thomas Muller signed a new three-year deal with Bayern Munich.

The love affair between Bayern and Muller is one of the immovable certainties of modern football. A local boy with a goofy grin, a stable full of horses and a refreshing sense of humour, Muller is the apple of Bayern's eye.

Married for two decades now, the club and player need only reaffirm their vows from time to time, to refresh the legal basis for their unending devotion.

There are, of course, flirtations. Every few years, as he nears the end of his contract, Muller starts making noises to suggest he is not entirely happy.

A familiar rumour mill creaks into action again, linking the gangly forward to a move abroad - usually to the Premier League - only for Muller and Bayern to rekindle the romance after all and sign a new deal.

'About two thirds of my life has been spent with Bayern,' said Muller, who joined the club's academy in 2000, after Tuesday's announcement.

'It's not just that the club and I have followed the same path, it's more that we both fight for each other. Bayern is not just my employer, it's my passion.'

This time around, Muller was probably as close to leaving Bayern as he had ever been. Demoted to the bench under former coach Niko Kovac, the 30-year-old was disillusioned last autumn. Yet with the arrival of new boss Hansi Flick, he and Bayern started fighting for each other again, and both player and club quickly returned to their brilliant best.

For all his frustration under Kovac, however, Bayern were never likely to let Muller leave. In an era where most global superclubs and top athletes are indistinguishable, his jovial, boy-next-door persona is an irreplaceable asset for Bayern, both on and off the field.

In German, they call him an 'identification figure', a clumsy cliché which both means he is a symbol of the club, and a character with whom local fans can identify amid the array of international superstars in Bayern's ranks.

Born and raised in Pahl, a tiny town just south west of Munich, Muller joined the club at the age of ten and has been a beloved local hero since he made his first-team debut in 2008.

His wife, Lisa, is a dressage rider with a horse called Dave, and Muller himself is not afraid to get his hands dirty in the stable. Last month, he came back from a Bundesliga victory over Augsburg in the afternoon to help birth a foal in the evening. In their list of reasons for his latest contract extension, Bild put number two as 'home and horses'.

He speaks with a Bavarian twang, and famously subjected a Latin American journalist to a barrage of regional dialect when celebrating Germany's triumph in the 2014 World Cup final.

In fact, almost everything he ever says to a journalist is delivered with a wry grin. Last December, upon receiving the Bavarian Order of Merit, he noted that his regional compatriots were 'people who don't forget the humour in life'.

The sense of humour and groundedness are partly an act, a carefully cultivated image of a Thomas Muller the public expect and want to see.

In that regard too, he is the perfect ambassador for Bayern, an unashamed behemoth of the European game who cleverly market themselves as the superclub with a soul: the big club who help little clubs, and still send their stars on an annual tour of village fan groups.

'Thomas is an identification figure for the hardcore fans here in Munich, but he is also famous across the world,' said Bayern's CEO-in-waiting Oliver Kahn this week. On one day, Muller can charm a bar full of beer-bellied Bavarians. On the next, he can throw on an India cricket jersey and strike up a marketing partnership with Virat Kohli.

Most importantly, however, he is equally hard to define on the pitch. A loping, throwback of a forward whose socks fall down and celebrates by simply punching the air, he is also the most modern of footballers: a tireless manipulator of space who has chalked up 14 major titles and 195 goals for Bayern.

Before Flick gave him a new lease of life in recent months, there were plenty who thought Muller was long past his best. Ever since his dire showing at Euro 2016 and subsequent struggles under Carlo Ancelotti, he had not been quite the player he once was.

Yet even in those supposedly barren three years, Muller averaged an assist in every second league game he played in. Even in the worst moments under Kovac, he was often there when the coach needed him most: knocking balls back into play with his bony shins, bundling crucial equalisers over the line and cajoling his directionless diva team-mates.

Not valuing Muller highly enough was probably the biggest mistake Kovac - a double winner despite it all - made during his short tenure. Once he left, Muller's form exploded, so did Bayern's.

The perennial champions were eyeing a treble when the coronavirus hit. It was proof, if any was needed, that Thomas Muller and Bayern are like love and marriage: you simply can't have one without the other.