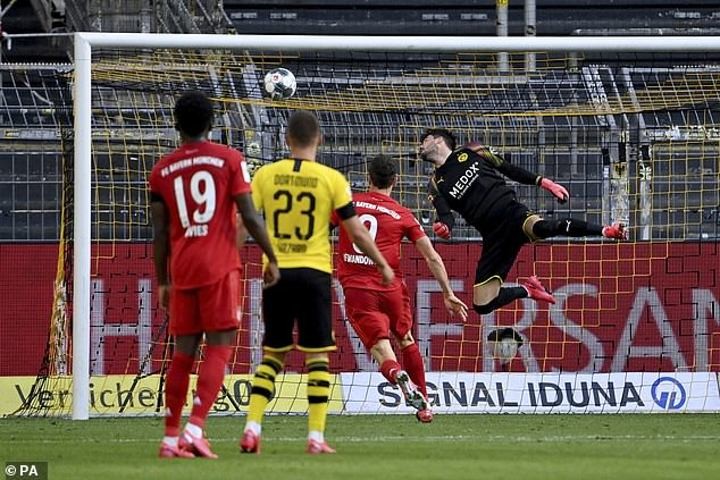 Thomas Muller has revealed that Bayern Munich targeted a weakness in Borussia Dortmund goalkeeper Roman Burki's game by attempting to chip him.

Bayern prevailed 1-0 in Der Klassicker, with Joshua Kimmich scoring the only goal of the game with a superb lofted effort in the 43rd minute.

Muller disclosed that it was a deliberate tactic from Hansi Flick's side as they tried to catch Burki out.

Muller told Viaplay Fotball: 'Joshua did this chip. I think it was a long hang time of the ball but I had a good feeling from the first moment.

'Roman Burki is a great goalkeeper, but one of his strengths is that he's maybe one or two steps outside of his goal because maybe he [doesn't have] the longest arms, so with this one or two steps in front he tried to have a better angle and Joshua saw that and it was a beautiful goal.'

Bayern's victory provided them with a major boost in their quest to retain the title - they are now seven points clear of Dortmund with six games remaining.

The game wasn't without controversy, with VAR surprisingly not consulted to check whether Bayern defender Jerome Boateng handled the ball while attempting to block Erling Haaland's shot.

In the closing stages Robert Lewandowski had a chance to make it 2-0 to Bayern, but his effort hit the post.

Bayern are back in action on Saturday when they host Dusseldorf, and they will be full of confidence going into the remaining games of the season.