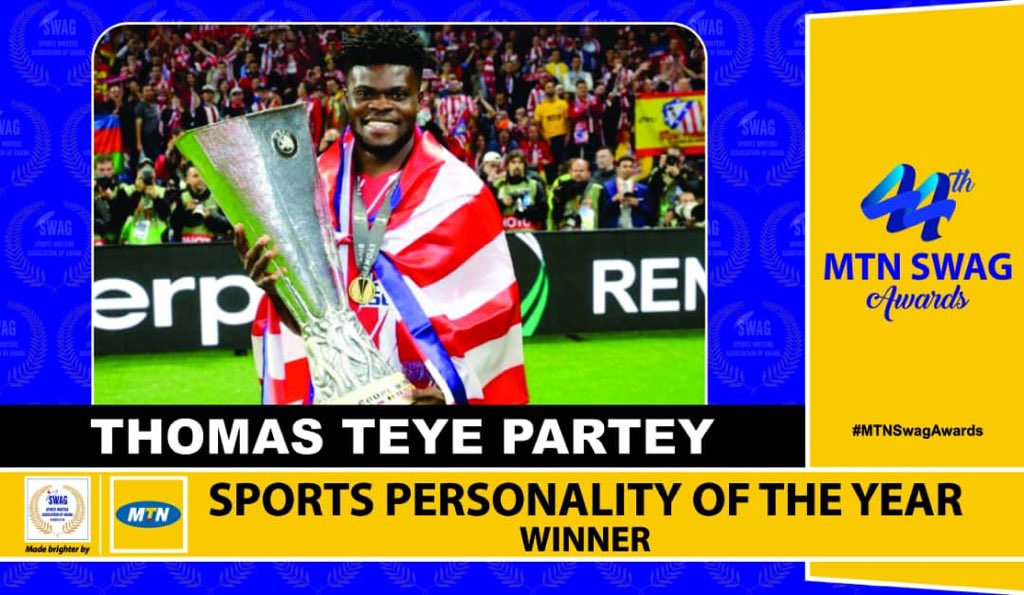 Black Stars and Atletico Madrid star, Thomas Partey has express his profound gratitude to the Sports Writers Association of Ghana and Ghanaians in general after winning the SWAG Sports Personality of the Year 2018 held on Saturday night.

The 25-year old also won the Men’s Footballer of the Year award after beating off competition from John Antwi, Felix Annan, Kassim Nuhu and Joseph Aidoo.

Partey had an incredible season last year and was thus nominated for top awards due to his impressive performances at both club and national level.

In 2018, he was nominated for the BBC African Football of the Year Award helping Atletico Madrid win the Europa League as well as the Super Cup after beating Real Madrid in the finals which he assisted with a goal right after coming off the bench.

He was nominated for the CAF African Football of the Year award which was won by Mohammed Salah of Liverpool and Egypt. Partey made it in to the Africa’s Best XI team at the CAF awards this year.

In addition, he was Ghana’s top scorer during the 2018 FIFA World Cup qualifiers.

The versatile midfielder was impressed with the honor bestowed on him by SWAG and in a tweet, he said, “Waking up to this special news is a blessing to me, I just want to say a big thank you to SWAG, those who voted me and to my representatives. Thank you, Ghana,”.

Partey will be one of the key players to lead the Black Stars to the upcoming Africa Cup of Nations to be staged in Egypt as Ghana hopes to break the title drought since they last won in it in 1982.

This will be his second appearance at the competition after making his debut in the 2017 edition.