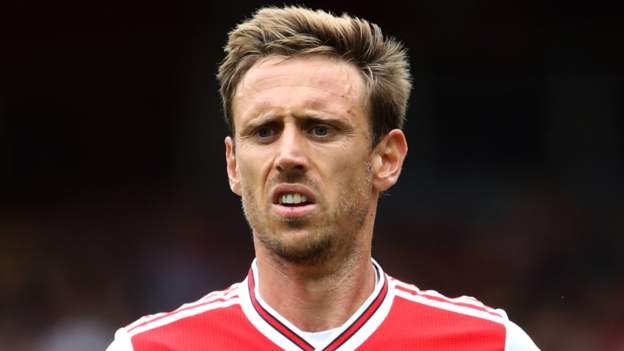 Former Arsenal and Spain defender Nacho Monreal has been forced to retire because of a long-term knee injury.

Three-time FA Cup winner Monreal left Spanish side Real Sociedad in June after missing the 2021-22 La Liga season because of the issue.

The 36-year-old had surgery last September but said his right knee had sent him a message "loud and clear".

"I cannot continue," Monreal said in an Instagram post announcing the end of his 17-year senior career.

"Do I get mad? No. I listen to it and accept the situation and thank it for everything.

"Thirty-six years playing football, 16 as a professional. Squeezing my body and taking it to limits that I would never have imagined.

"A stage is over. Another starts. I'm happy and feeling good. One more time - I feel good. And that gives me peace of mind."

Former Osasuna player Monreal became then-Gunners manager Arsene Wenger's only signing of the January transfer window in 2013 when he joined the club for around £10m from Malaga.

The left-sided defender scored 10 times in 250 appearances, including a decisive goal against Manchester United at Old Trafford in the FA Cup quarterfinals in 2015 and the equaliser against Manchester City in the semi-finals the following year.

Arsenal won the trophy in 2014, 2015 and 2017, and Monreal also started their 2019 Europa League final defeat to Chelsea shortly before moving to Sociedad.

The veteran thanked all of his former sides for "letting me cross your paths", adding: "Life is a gift and I like to be grateful. What good years."

Monreal scored once in 22 international matches after making his debut for La Roja in 2009.

He last played for his country in a friendly before the 2018 World Cup, where he was an unused substitute throughout the tournament.