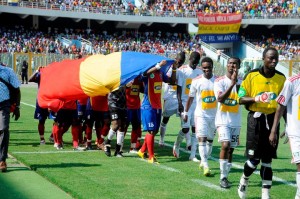 Some spectators will pay double as tickets prices soar for the big Ghanaian derby between Asante Kotoko and Hearts of Oak, GHANAsoccernet,com can exclusively reveal.

The hosts of the April 15 Premier League clash are looking to cash-in big time on the prospectively massive attendance expected for the week 24 game at the Baba Yara Stadum to boost their fund raising campaign to settle recently incurred debts.

Kotoko will take delivery of all proceeds of the game after several administrative and statutory deductions due to the Premier League's 'home side-takes all' policy and thus wants to take full advantage especially after being hit with several Fifa fines over wrongful dismissal of coach Hans Dieter Schmidt in 2005 and massive errors in the sale of players.

"We would like to appeal to our avowed supporters to bear with management as we desperately raise the needed amount to settle the Fifa judgement debts," Kotoko's Public and Supporter Relations Manager Listowell Yesu Bukarson told GHANAsoccernet.com.

"The top ups will be used to pay this debtÂ andÂ other outstanding financialÂ commitmentsÂ of the club."

Kotoko currently lead the Ghanaian topflight by eight points and are well on track to clinch their 22nd league title with eight matches left to go.