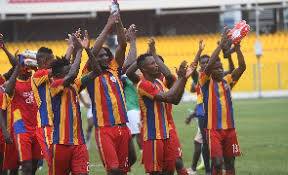 Hearts of Oak are through to the round of 16 of the Tier II Special Competition after dispatching Uncle T United at the Accra Sports Stadium on Thursday morning.

The game which was postponed because of the heavy downpour on Wednesday produced a six goal thriller as Hearts beat Uncle T 4-2.

Two goal in two minutes ensured the Phobians and the lower tier side went into the break at 1-1. Joseph Esso leveled after connecting from a cross from Christopher Bonney just two minutes after Uncle T took the lead.

Hearts were forced into making a change before the break after Michelle Sarpong was taken off for Kwadwo Obeng Jnr.

Christopher Bonney scored from the spot to sent the Rainbow club ahead in the 60th minute and six minutes later the troublesome United pulled parity.

With ten minutes left on the clock, Hearts took the lead once again through Kwadwo Obeng Jnr before Kofi Kodzi added gloss to a fine performance by making it 4-2 with three minutes left.

Hearts are through to the round of 16 and will be awaiting their next opponent after the draw for the next stage is held.