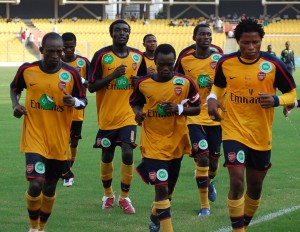 Division One side, Berekum Arsenals have officially written to the Ghana Football Association Normalisation Committee (NC) concerning the match venue against Asante Kotoko in the quarter-finals of the Tier II Special Competition.

Berekum Arsenals claim that Asante Kotoko are been favored in the ongoing competition as they have played two games at home hence they are proposing the quarter-final game be moved to a neutral venue.

In a letter sighted by GHANAsoccernet they have proposed Bechem, Nsoatre or Dormaa as venues to be considered for the game.

The club insists that the Normalisation Committee chooses one of the venues or they pull out of  the competition.

On the other hand, Asante Kotoko have been silent on the issue as they also battle their own case against the Normalisation Committee on the same matter against Hearts of Oak in the semi-finals of the Special Competition.