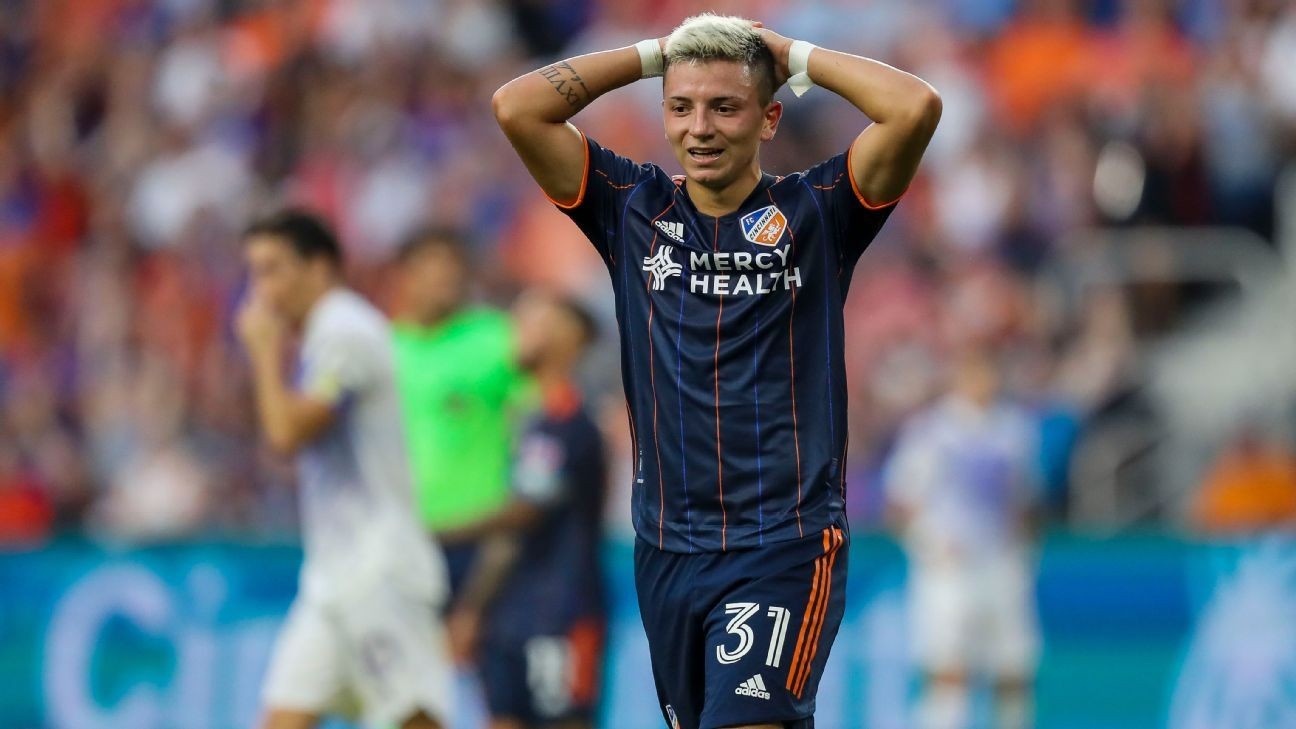 On Wednesday, fans of FC Cincinnati witnessed what is by now a familiar sight. There was team president Jeff Berding, standing at the podium and introducing yet another hire on the technical side -- in this case, new GM Chris Albright. As FCC approach the end of their third season in Major League Soccer, Albright is the team's third GM. The organization is also on the cusp of hiring its fourth manager, not including the two interim stints served by loyal assistant coach Yoann Damet.

This turnover is reflected in the team's results. Barring a late revival, Cincinnati is poised to finish dead last in the league for the third year running. Only once before in MLS history has a team finished last twice in succession: the Chicago Fire in 2015 and 2016.

So how is it that Cincinnati has continued to get things so spectacularly wrong? In an exclusive interview with ESPN, Berding continually referred back to the team's accelerated entry into MLS as an explanation for the team's struggles.

Prior to their debut season, FCC had only been a USL team for three campaigns. From the time of their last season in the USL Championship, Berding says the team had about 270 days to get everything together for their entry into MLS. Yet from the beginning. some of the blunders were stunning in their scope.

There was Berding's decision to acquire all of the Philadelphia Union's picks in the 2019 SuperDraft for upwards of $200,000 in allocation money, a move that might have worked in the NFL, where Berding worked for 19 years, but didn't reflect the reality of how important MLS academies were becoming. It was akin to setting allocation money on fire. Multiple sources confirmed to ESPN that it took multiple conversations to convince Berding how important academies were, although he did eventually get there.

As the team stumbled out of the gate, manager Alan Koch, who followed the team into MLS from the USL Championship, was then dismissed just 11 games into that first season. It would be hard to argue in good faith that Berding didn't already know precisely what he had in terms of Koch's strengths and weaknesses.

One MLS executive said, "In terms of [the technical side of] the soccer business, Berding is pretty clueless."

Cincinnati was by no means the first team to struggle in its expansion season, but the quick run-up doesn't adequately explain how things went sideways in years two and three. Through it all, Berding remains the common thread. He served as the team's GM before turning over the technical reins to Gerard Nijkamp in May of 2019. Yet multiple league sources paint a picture of organizational dysfunction with Berding at the top, even as he has insisted that he put individuals in place to make the technical decisions.

"I think [Berding] created this burnout type of culture," said one source with knowledge of FCC's inner workings. "Work people really hard, underpay in the front office. I think in the front office, it created this dynamic through the club that people just weren't aligned. And I think people always felt that they had to be looking over their shoulder about what somebody was saying or doing." The source added that this went beyond the usual disagreements about players. It was also a culture that was reactive to external pressures.

"You have to really be insulated from the outside because you're going to go through those tough moments. You're going to have critics," the source said. "That's just what it is. It's part of it. But it's how can you, as a group, insulate yourself and have that trust that, 'OK, if we're going to ride together, we're going to die together' type of mentality.

Berding not only defended the organization's culture, but made no apologies for anyone who didn't last until the club's entry into MLS.

"Did I push and prod that group to the summit? Yes, I did. And I think that we're in a great place now to be enormously successful with Chris."

Yet the team's performances have remained mired in the Marianas Trench.

Berding seemed to be following a league-wide trend of hiring sporting directors from overseas when he brought Nijkamp on board midway through the expansion season. He noted that no-one was emphasizing MLS experience when he made the hire. The aborted managerial tenure of Ron Jans, who resigned after making racist comments in front of players, didn't help. But even after Jaap Stam was brought on board, the lack of alignment continued.

One example was the acquisition of Maikel van der Werff. Nijkamp was warned that the Dutch defender wasn't athletic enough for the league. He has since made just 24 league appearances in three seasons, and has missed all of the 2021 seasons with a groin injury.

In terms of playing style, one would have thought that the Dutch influence would have steered the team to a more possession-based approach, with the signing of a player like Haris Medunjanin reinforced that notion. Yet Stam, in a bid to shore up a leaky defense, certainly went into bunker-mode more than once.

When it comes to the failures on the technical side, Berding alternates between saying how "It's my responsibility" while also laying the blame on those he hired.

"You can offer that the strategy was wrong. You can also say some of the hires didn't pan out. And I would say, respectfully, that that's why we made a change to Chris."

FC Cincinnati is on course to finish dead last in MLS for the third straight year, a feat never before achieved in the league. Katie Stratman-USA TODAY Sports

Berding highlighted how FCC are now in the top five in the league in discretionary spending, but it hasn't been money well-spent. Yuya Kubo has been one of the team's better players in 2021, but the fact that he spent much of it as a No. 6 or No. 8 -- when he was brought into galvanize Cincinnati's attack -- speaks to how flawed the roster is. It would seem that Cincinnati could fill those midfield positions without having to spend $1.2 million in salary. (Kubo has since moved back to the wing under interim manager Tyrone Marshall.)

Now the GM responsibilities belong to Albright and much like he did on the day of Nijkamp's hiring, Berding painted a picture of Albright having the final say on matters. But will he?

According to multiple sources, Berding continues to have an unhealthy influence on the technical side of the organization. Earlier this year, a proposed trade involving Frankie Amaya nearly went off the rails when FCC filed tampering charges against both the Union and the New York Red Bulls, although Amaya did eventually end up in New York.

"Berding all of a sudden stepped in and was basically blocking everything," said one league source.

Berding denies he has been involved on the technical side, save for one dispute involving a player's discovery rights. And he continues to point to the speed at which Cincinnati joined MLS as an explanation for everything.

So how is Berding still in his role? Suffice it to say, he has built up considerable goodwill given where the team sits business-wise, with brand-new TQL Stadium and sponsorships that he says rank among the leaders in MLS.

Major League Soccer is here! Coverage of all 27 teams with live games, replays, highlights.
Sign up now to stream soccer on ESPN+

There is also a recognition of how far the team has come. In 2014, Cincinnati wasn't even in the conversation in terms of expansion teams. Now it's here to stay.

"That club doesn't exist without him," said one former staffer about Berding and FC Cincinnati. "He willed that to happen, and rallied everyone behind it, and that was his vision, and it has manifested that way. To make that run as fast as they did, I don't know that that happens with anyone else."

That reality hasn't been lost on owners Carl Lindner III and Meg Whitman.

"I think there's a lot of loyalty and a lot of appreciation for just the sweat equity, and the belief and the vision and the drive that made this all happen," the former staffer added. "And I think that there's really loyal people involved."

That equity is something Berding will leverage until his time with FCC is done, whenever that is, but even if Berding stays out of the way, Albright has a huge task ahead of him. One league insider estimated that it would take two to three years for Albright to shed the baggage created by bloated contracts, although Berding insists the team has flexibility and has learned its lessons.

The coming seasons will reveal how much.