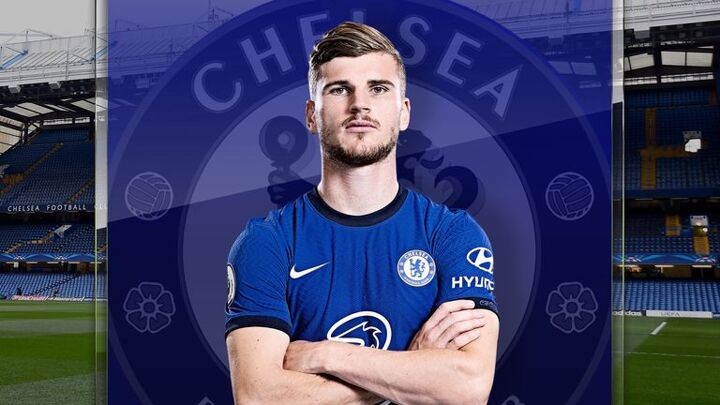 Chelsea's Timo Werner admitted his recent goal drought was the worst time of his career, but says he is feeling the flow again under Thomas Tuchel.

Werner scored just one goal and provided three assists for Chelsea in 19 appearances in all competitions - his only strike coming against Morecambe in the FA Cup - with Chelsea's own drop in form resulting in the sacking of Frank Lampard in January.

But since compatriot Thomas Tuchel moved to Stamford Bridge, Werner's contribution and performance has improved, scoring once and providing three assists in five appearances.

Speaking with Sky Sports' Pat Davison, the 24-year-old spoke candidly about his struggles in front of goal, the mental and physical difficulties of the Premier League, his guilt around his form, and why he is feeling the flow again under Tuchel.

'Worst time of my career'

Moving from RB Leipzig for £47.5m in the summer, having scored 95 goals in 159 games for the German side, there were high expectations of Werner at Stamford Bridge. But during his barren run, Werner admits he struggled.

"The smile wasn't on my face all the time. You have to keep smiling, that's the most important thing because when you are not happy and you don't enjoy football, and you are always angry or mad, you can't go back to moments where you can play good football.

"That's my thing and how I want to train. The other things are: always be positive and not mad, and that's the next step to being back to the old Timo. Behind the smile, of course there were a lot of days without goals and also sometimes losing. It's not the best feeling but smiling on the outside is the best way to keep going.

"The period where I didn't score was the worst time of my career because I'd never missed so many big chances. I'd never been so long without a goal, so I was very happy it ended two games ago. It was a difficult time without those feelings.

"When I look back at my half a year with Chelsea, it wasn't the most difficult time in my career, but the best time to learn new things. When you have a period without goals you learn something from yourself. You learn a lot about how you can handle these situations and it was the best time for me to learn the most in my career. From bad moments you learn the most and that's exactly what happened in the last month."

Werner insists goal droughts were not new to him, and that in the past he learned to become more of a team player to make up for the lack of goals.

"In the past, I've had a lot of difficult situations in my career. Also, at Leipzig where I scored all the time. These situations were with myself because I learnt I had to make more for the team than I did before. I had to do extra work in terms of defensive work and make more assists for my team-mates rather than just rely on goals.

'I feel guilty for missing so many chances'

Lampard was sacked after a run of just four wins in 11 games, and having admitted that Werner felt guilt for missing big chances under the former manager, he says he is not experiencing a fresh start under Tuchel.

"When you come here to play as a striker and be the man to score the goals, of course I felt a little bit guilty that I missed so many chances. For the club, for the old manager but also for me because I want to score all the time and as much as I possibly can.

"Of course, if I'd scored four or five more goals maybe the old manager would still be here because we'd maybe have won two or three games more but you can't look too much into the past because there are too many games ahead of us.

"The past was like this and of course I feel a little bit guilty, but in football you have to go on, and now we have a lot of big games in the next few weeks and you have to look forward, especially when you have a new manager. It's a new beginning for everybody, for me as well because I'd missed so many chances and so many points, maybe I start now with a new start, and it's worked very well until now.

"I understood the old manager very well. It was not because of the language, but when you can talk German to someone, there are things he can explain to me easier than the old manager could. It's different when you talk to someone in your own language because one word is enough to make a sentence completely different.

'The Premier League is harder than I was told'

As with most players moving to the Premier League from abroad, Werner was told to expect a fast and physical division. He experienced that, and more...

"Everyone says there's a lot of strength, a lot of big guys in defence, the Premier League is very fast and there's a lot of high intensity. So, I came here and thought it would fit me very well, but now I know it is much more than just what people say.

"There's a lot more work in the Premier League. You have to a lot more defensive work as a team than, for example, in the Bundesliga. What I get now is that the Premier League is really hard. Every game, whether you play against the bottom side or the third side, it's always the same game.

"You can't go to the bottom side and say it's going to be an easy win today. You go to Burnley, you go to West Brom and it's a hard game. It's a very hard game and that's what makes it a lot of fun. You can never have a break. You always have to be at 100 per cent, always at the top level and that's something special in the Premier League."

Ahead of Chelsea's huge clash with Manchester United, live on Sky Sports on Super Sunday, Werner says the club's main goal is to finish in the top four.

And Werner, currently on five league goals, has set his sights on hitting double figures by the end of the season.

"Manchester United are a very good team. It's always a good game for everybody but at this moment it's really important for us because when if win, we can close the gap to United.

"If we win, we are hopefully back in the top four and that has to be the main goal at the end of the season, to play Champions league football next season. For that, the next two games in the Premier League are the most important games.

"If we can reach the top four, as a team, that would be perfect. In the Champions league and the FA Cup, you never know but we have a big chance go far in those cups.

"For me, when I score a few more goals in the Premier League, maybe I can get to 10, that would be good for my first season. Then at the end of the season, I can go to the European Championships and say it was a good first season for Chelsea with ups and downs, but at the end we reached the goal of getting to the Champions League and me getting into double figure for goals.

"That's the goal for the end of the season and with this team and the manager, we are in good shape now."