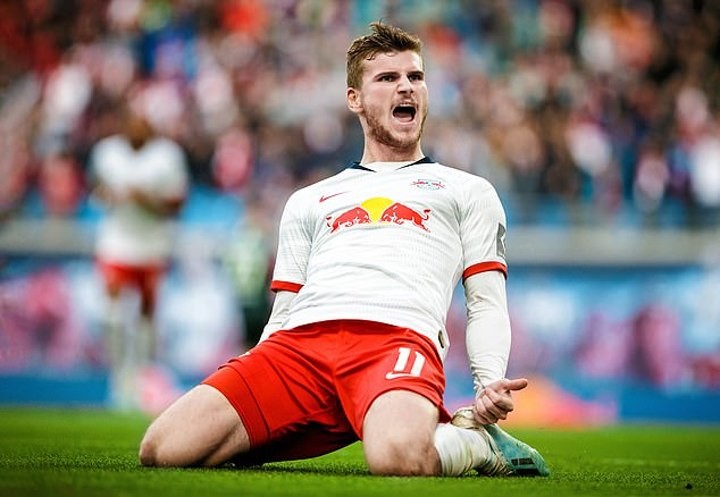 As the eyes of the world peer at the Bundesliga in hope for the future, the gaze of Liverpool fans might fix a little harder on one player who could help shape theirs.

Timo Werner will lead the line for RB Leipzig at Mainz and give the supporters on Merseyside a glimpse of who they want to light up Anfield whenever next season begins.

One of the brightest talents in Europe, Werner's tally of 21 goals in 26 Bundesliga games this season is second only to Bayern Munich's Robert Lewandowski.

Those Liverpool fans who tune in to see 24-year-old Werner may find their imaginations sparked by memories of a former Anfield hero.

'Werner is the Fernando Torres type, where he is super explosive, he will run away from anyone,' said Owen Hargreaves, former Bayern Munich and England midfielder.

'He's got to make sure that he gets the right fit. We saw this with Torres when he left Liverpool, the way they played, Stevie G [Gerrard] playing those balls through the middle — a match made in heaven.

'Then he goes to Chelsea where they had a lot of slow possession and no space to run into. That's not a great fit. He was a super player, Chelsea were a super team, but you've got to play to a player's strengths.

By the sounds of it, Werner has already finished that assignment. 'Jurgen Klopp is the best coach in the world,' he said recently. 'There is a lot to suggest that my style of play would suit there.'

Werner is another coup for Red Bull, the energy drinks firm that 15 years ago took a punt on breaking into football's elite, now dominate Austrian football and have taken RB Leipzig from the fifth tier to the Champions League.

However, their unconventional and rapid rise meant the club became an instant hate figure for many in Germany. In 2005 Austria Salzburg became Red Bull Salzburg, but company chief Dietrich Mateschitz always had ambitions to conquer Germany's Bundesliga.

The Austrian wanted more than the one club in his home country and quickly identified Leipzig as prime for investment. However, success in Germany would be tougher than first expected. Sachsen Leipzig, now dissolved, were the first to be identified in 2006 but the DFB (German FA) blocked the deal.

DFB regulations prevent the use of company names in club titles, so RasenBallsport (Lawnsports) Leipzig was adopted. RB Leipzig carry the company's logo and their name is the club's shirt sponsor.

Germany's football culture is built on fan ownership, the 50+1 model that states supporters must own 50 per cent of a club plus an additional share.

In a legal move, the club issued a small number of shares and purchased 49 per cent of them, making the remainder available at significant cost while handpicking who could buy them. It allowed RB Leipzig to conform to the rules, but with 17 members, a far cry from traditional clubs such as Borussia Dortmund, who boast 154,000.

Leipzig needed to adopt a sustainable plan, and an individual to take them there. Step forward, Ralf Rangnick. He became sporting director for both Salzburg and Leipzig in 2012. No superstars, no signings over the age of 25 and no extreme wage deals. It led to a revered recruitment strategy.

Liverpool's Sadio Mane, Naby Keita and Takumi Minamino all came via the Red Bull conveyor belt, while Erling Haaland is the latest star off the production line.

Southampton manager Ralph Hasenhuttl also started at Leipzig, where a second-placed finish in the Bundesliga in his first season took them to the Champions League.

Today Leipzig travel to Mainz, a reverse of the fixture that saw Nagelsmann's men win 8-0 in November. Part of that was a hat-trick for Werner. Liverpool fans would surely love a repeat.