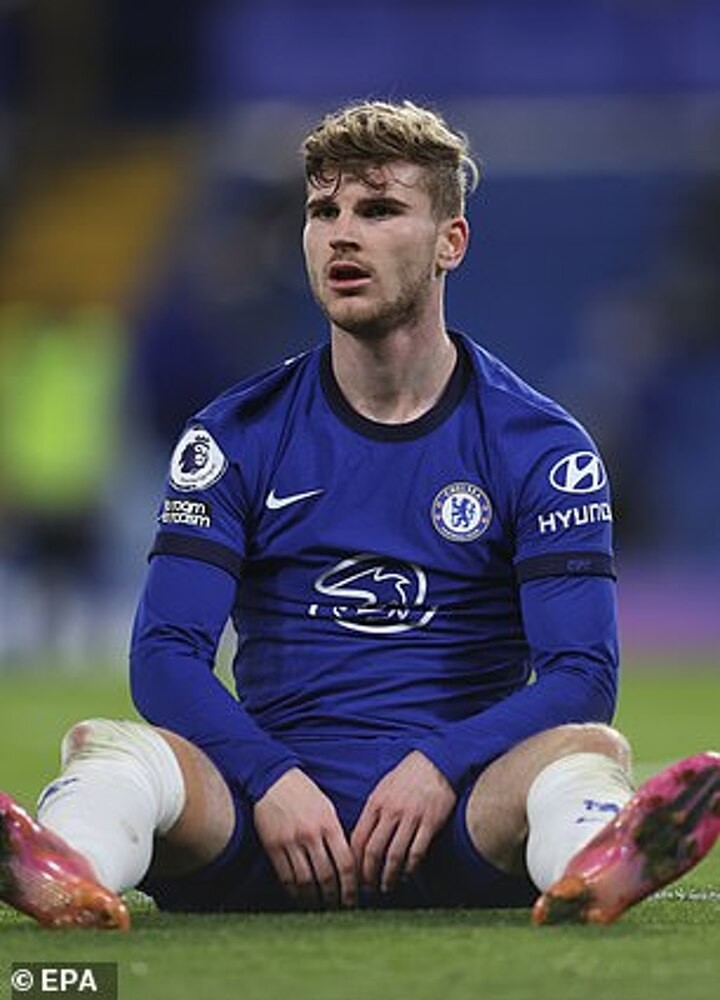 Timo Werner's numbers for Chelsea this season have been 'terrible' and Thomas Tuchel must find a goalscoring solution internally or externally before next season, according to Graeme Souness.

The Blues rose to third in the Premier League table and placed themselves in the driving seat to qualify for next season's Champions League after beating Leicester - who dropped to fourth as a result - at Stamford Bridge.

But the first half did not go Werner or the Blues' way, with the German having one goal ruled out for offside - after failing to get himself back in line - before what he thought was the opener was then cancelled out by VAR for scoring with his hand instead of his head.

The 25-year-old has scored just six Premier League goals this term in his first 34 league games in English football, including just two in his last 26 top-flight matches and only one against a team from the top half, which came at West Ham last month.

And speaking to Sky Sports, Souness admits that while Werner may yet come to score the goals that he did in the Bundesliga with RB Leizpig, Chelsea will not achieve much success if a midfielder like Jorginho - who scored the penalty the German won in the second half - is their top scorer next season like he is this.

'If Chelsea had been going through a difficult time, he [Werner] would have been the target, above any other player at Chelsea, for criticism,' Souness said.

'His numbers are terrible for a centre forward at a big club, but he always looks like he gets chances because he is rapid, he is electric, and he would beat most people in a sprint.

'You see him afterwards celebrating with supporters and he does not look down in spirits, which is a great thing.

'He was a goalscorer before he came to Chelsea, and it may yet happen for him, but Jorginho, your midfield player, as your top scorer with seven goals, you cannot be successful if you are relying on penalties at the highest level.

'They will have to find one [a goalscorer], whether it is Timo Werner or [Kai] Havertz or someone they bring in. They have to get an out-and-out goalscorer, and I think that is the final piece of the jigsaw for them.'

'I like Timo Werner's spirit, his energy, he keeps on going, but when you are an striker at a big team, you wait for these moments when you are playing in a big match,' the Dutchman said.

'These decisive moments where you have to be there and put the ball in the net, and for me he has not done that enough.

'What I do like is that he puts himself in positions where he gets opportunities. Now the the last bit. he has to do better. He has to be calmer and more calculated.

'Having six or seven goals is not good enough, it is not a good return, and he knows that.

'Does he give up? No. Do I like that? Yes. But in big games you are going to get one or two big games, you have to be there and you have to make the difference.'

Asked if Werner could eventually become Chelsea's answer to their goalscoring dilemma, Hasselbaink added: 'The good thing is he is getting himself those opportunities; he is always there for that final ball.

'Will he become calmer? Time will tell. Do I have hope? Yes, because he keeps getting those chances, and he is stubborn like that, and you need to have that as a striker. Let's see.'