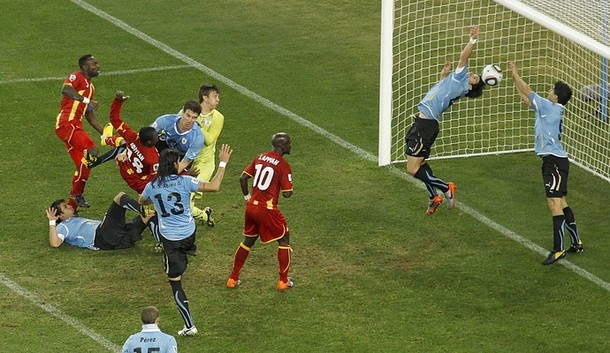 On this day 2 July 2010 (Exactly 10 years ago today) Uruguay reached the semi-finals of the FIFA World Cup for the first time since 1970, but ended the hopes of Africa after winning a truly extraordinary match at Soccer City on a penalty shoot-out.

Ghana seemed certain to become the first African side to reach the last four of the competition when Luis Suarez saw red after handling on the ball from entering the net.

However, striker Asamoah Gyan, who had already converted two penalties in South Africa, skimmed the crossbar with the last kick of the game.

And Sebsatian Abreu then showed ice-cold composure to dink the decisive penalty beyond Richard Kingson as Uruguay sealed a semi-final tie against the Netherlands.

It was the first time that the teams had ever played each other in a senior competitive football match. After a dramatic 120 minutes of play (including extra time) that finished 1–1, Uruguay won in a penalty shoot-out 4–2. Uruguay dominated the early periods of the match, but suffered an injury to captain Diego Lugano in the first half. Just before half-time, Ghana took the lead when Sulley Muntari was allowed time on the ball by Uruguay, and took advantage by scoring with a shot from 40 yards. After half-time, Diego Forlán pulled Uruguay level with a free kick from the left side of the field that went over the head of Ghana's goalkeeper Richard Kingson.

While both teams had chances to win, the match proceeded to extra time as the scores remained level. Late in extra time, Ghana sent a free kick into the box; Luis Suárez blocked Stephen Appiah's shot on the goal line. On the rebound, Dominic Adiyiah's header was heading into the goal, but Suárez blatantly blocked the shot with his hands to save what would have been the extra-time winner and he was red carded. Asamoah Gyan missed the ensuing penalty kick off the crossbar and Suárez celebrated the miss.

In the shootout, Gyan converted his penalty, as did everybody else until the 4th round of penalty kicks when Adiyiah's penalty was saved by Uruguayan goalkeeper Fernando Muslera.

After the game, Suárez said, "I made the save of the tournament," and, referring to the infamous handball goal scored by Diego Maradona in the 1986 World Cup, claimed that "The 'Hand of God' now belongs to me." Suárez claimed he had no alternative and was acting out of instinct. Forlán agreed that Suárez saved the game, "Suárez this time, instead of scoring goals, he saved one, I think he saved the game.

Ghana coach Milovan Rajevac said the play was an "injustice" and Suárez was labeled a "villain" and a "cheat".

But Uruguay coach, Óscar Tabárez, said these labels were too harsh, "Well, there was a handball in the penalty area, there was a red card and Suárez was thrown out. Saying that Ghana were cheated out of the game is too harsh. We have to go by the rules. It might have been a mistake by my player but I do not like that word ‘cheating’."

Ghana was the last African team left in the tournament and if they had won, they would have been the first team from Africa to ever make the semifinals.

Thus, Suárez was said to have "enraged an entire continent [Africa]." But others viewed him as a hero who sacrificed himself in the semifinal for the unlikely chance that his team could win. A distraught Gyan conceded, "I would say Suárez is a hero now in his own country, because the ball was going in and he held it with his hand. He is a hero now".