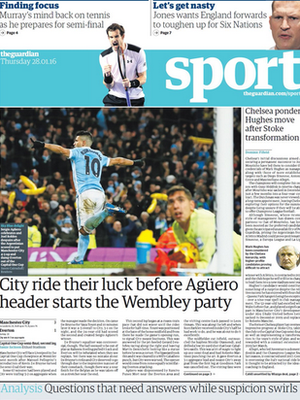 Chelsea have turned their attention to Stoke City boss Mark Hughes as they look for a permanent manager next season. (Guardian)

However, Tottenham Hotspur manager Mauricio Pochettino has also emerged as a "strong and credible" contender to take over at Stamford Bridge. (Independent)

Chelsea defender Gary Cahill, 30, wants to leave Stamford Bridge after falling out of favour with interim boss Guus Hiddink. Cahill fears his lack of playing time could cost him his England place at Euro 2016. (Sun)

However, Cahill is unlikely to be permitted to leave Chelsea this month. (Guardian)

The Blues are also closing in on a £3.5m deal for New York Red Bulls defender Matt Miazga, 20 and retain an interest in Aymen Abdennour, who they missed out on when the 26-year-old defender moved to Monaco from Valencia for £22m in the summer. (The Times - subscription required)

Bayern Munich striker Robert Lewandowski, 27, will reject interest from Manchester City, Manchester United and Chelsea to wait for a move to Real Madrid once the Spanish side's transfer embargo is lifted at the end of next season. (Independent)

The Foxes could make a surprise move for Southampton striker Graziano Pelle before the transfer deadline with the Italian international, 31, potentially available for as little as £5m. (Sun)

Arsenal have agreed a £23m fee with Dynamo Kiev for Ukraine forward Andriy Yarmolenko, 26, who was previously interesting Everton. (Sport.ua via Daily Star) 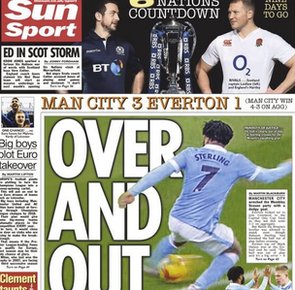 The Gunners are also set to move for Celta Vigo's Spain forward Nolito, 29, following the collapse of his proposed transfer to Barcelona. (Sport)

Feyenoord youngster Tahith Chong says Manchester United are keen to sign him, but the forward, 16, adds that he is not going to leave the Dutch club. (FR12 via Daily Star) 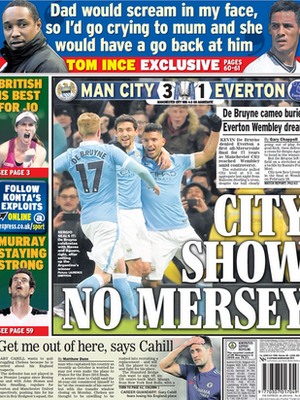 Former Liverpool and Chelsea striker Fernando Torres, 31, looks set to leave Atletico Madrid at the end of the season after coach Diego Simeone turned down the chance to make his loan move from AC Milan permanent. (Daily Mail)

Aston Villa supporters have hit back at the club's former assistant manager Peter Grant after he described fans as "delusional' in a BBC WM 95.6interview. (Birmingham Mail)

Swansea are close to a £7.5m deal for Chievo striker Alberto Paloschi, 26. (The Times - subscription required)

Arsenal are preparing an improved £4m bid for Leicester defender Ben Chilwell, 19, having already had a £3m offer rejected by the Foxes.(Sun)

West Bromwich Albion owner Jeremy Peace will refuse to sell striker Saido Berahino, 22, during the January transfer window - but will listen to offers for him in the summer. (Daily Mirror)

Tottenham have been in Spain this week for a short training camp and a number of their players, including striker Harry Kane, haveposted a picture of the team on Twitter  following a session in the sun.

Crystal Palace forward Yannick Bolasie has welcomed new signing Emmanuel Adebayor to the club, tweeting a picture of the pair  along with a message: "Say hello to our new signing! @E_Adebayor! Looking forward to playing alongside my bro!" 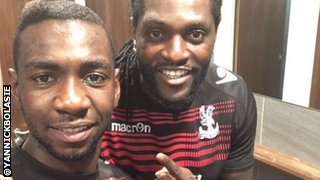 Ex-Spurs boss Harry Redknapp says fifth-placed Manchester United would not be any higher up the table  if their former boss Sir Alex Ferguson - the most successful manager in the history of the British game - was still in charge.

Southampton forward Jay Rodriguez, who has not played since 17 October following surgery on his ankle, says the past few weeks have been "difficult". The 26-year-old posted on Twitter:  "Can't wait to be back playing for @SouthamptonFC! Been a difficult few months but things are looking good with rehab!

One Direction star Louis Tomlinson is in line to play Leicester City's Jamie Vardy in a Hollywood film following the striker's rise to prominence. (Leicester Mercury)

Derby winger Tom Ince has revealed that his dad - former Manchester United, Liverpool and England midfielder Paul - moved into his flat in Blackpool when he was appointed Seasiders' manager, "cramping his style". (Daily Express)

New Crystal Palace striker Emmanuel Adebayor says he will use Google to find out more about the club after admitting he does not know much about them. (London Evening Standard)

League Two Carlisle United, whose Brunton Park ground was badly hit by floods in December, will have a 17,392-capacity crowd for Sunday's FA Cup fourth-round tie with Everton after selling every ticket. (News & Star)

Top-level assistant referees are to be offered the chance to turn professional on an annual wage of £35,000 in the hope it will raise standards. (Sun)